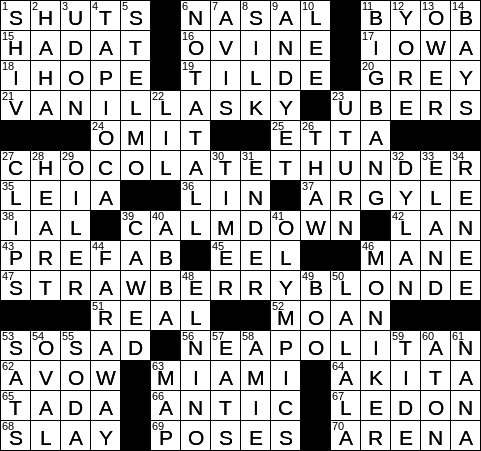 Themed answers start with the flavors that make up neapolitan ice cream:

11 [Guests must provide their drinks] : BYOB

The Latin word for “sheep” is “ovis”, giving us the adjective “ovine” meaning “like a sheep”.]

17 Where the first presidential caucuses are held : IOWA

The Iowa caucuses have been the first major electoral event in the nominating process for President since 1972.

Charles Grey, 2nd Earl Grey was British Prime Minister from 1830 to 1834. Beyond his political achievements, Grey lent his name to the Earl Grey blend of tea.

Maya Lin is a Chinese American from Athens, Ohio, who is an artist and architect. Her most famous work is the moving Vietnam Veterans Memorial in Washington, D.C. Lin was only 21-years-old when she won a public design competition in 1981 to create the memorial. Although her design is very fitting, sadly Lin was not a popular choice for the work given her Asian heritage. As she said herself, she probably would not have been picked had the competition been judged with the knowledge of who was behind each submission.

11 Beginning of the universe : BIG BANG

28 Symbol on a valentine : HEART

An eland is a large African antelope, and in fact the largest antelope on the continent. Both male and female elands have horns, and those horns have a steady spiral ridge along their length.

Dr Pepper was introduced in 1885 in Waco, Texas, one year before the competing Coca-Cola was released to the market. I spent an entertaining few hours at the Dr Pepper Museum in Waco a few years ago.