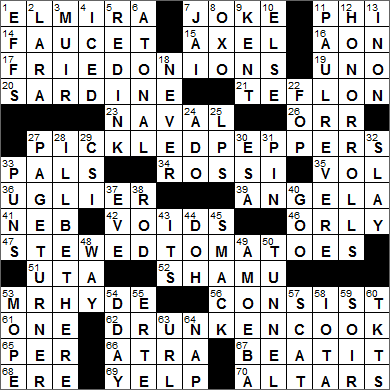 CROSSWORD SETTER: David J. Kahn
THEME: Drunken Food … each of today’s themed answers is the name of a food including an adjective meaning DRUNKEN. One might say they are foods that can be prepared by a DRUNKEN COOK:

17A. Serving with liver : FRIED ONIONS
27A. Food in a tongue-twister : PICKLED PEPPERS
47A. Chili ingredient : STEWED TOMATOES

11. Fraternity letter : PHI
Phi is the 21st letter of the Greek alphabet.

14. Tap : FAUCET
Here’s another word I had to learn to use when I moved to the US. The common “faucet” in an American house is almost always referred to as a “tap” on the other side of the pond.

15. Skating feat : AXEL
An Axel is a forward take-off jump in figure skating. It was first performed by Norwegian Axel Paulsen at the 1882 World Figure Skating championships.

20. Fish said to be named for a Mediterranean island : SARDINE
Sardines are oily fish related to herrings. It is possible that the name “sardine” came into English in the early 1400s as a reference to the Mediterranean island of Sardinia, around which were large populations of the fish. Sardines are also known as pilchards, although in the UK “sardine” is a noun reserved for a young pilchard. Very confusing …

21. Pan coating : TEFLON
Teflon is a brand name for the polymer called PTFE (polytetrafluoroethylene). Teflon is used as a coating for nonstick pans, a lubricant in machinery and as a graft material in surgery.

23. Kind of blockade : NAVAL
An embargo is a legal prohibition of trade with a particular country, whilst a blockade is an act of war, a militarily enforced prevention of the movement of goods and services. The term “embargo” came into English from Spanish in the late 16th century.

26. Hockey speedster Bobby : ORR
Bobby Orr is regarded as one of the greatest hockey players of all time. By the time he retired in 1978 he had undergone over a dozen knee surgeries. At 31 years of age, he concluded that he just couldn’t skate anymore. Reportedly, he was even having trouble walking …

27. Food in a tongue-twister : PICKLED PEPPERS
The earliest written version of the “Peter Piper” nursery rhyme and tongue twister dates back to 1813 London:

34. Martini’s partner in winemaking : ROSSI
The company that is today known as Martini & Rossi was started in the mid-1800s in Italy, by Alessandro Martini and Luigi Rossi (and a third partner who sold out years later). From day one it was focused on bottling the fortified wine known as vermouth. Nowadays, the company is also famous for its sparkling wines, and its sponsorship of Grand Prix racing teams. And yes, the famous cocktail is probably named for Mr. Martini.

35. Tennessee athlete, informally : VOL
The Tennessee Volunteers (the Vols) is the name given to the men’s sports teams at the University of Tennessee in Knoxville. The women’s teams are called the Lady Volunteers.

39. Actress Bassett of “Olympus Has Fallen” : ANGELA
Angela Bassett is an actress from New York who is best known for playing Tina Turner in the film about her life “What’s Love Got to Do with It”.

41. Bird’s beak : NEB
“Nib” is a Scottish variant of the Old English word “neb”, with both meaning the beak of a bird. This usage of “nib” as a beak dates back to the 14th century, with “nib” meaning the tip of a pen or quill coming a little later, in the early 1600s.

46. Paris’s ___ Airport : ORLY
Orly is on the outskirts of Paris, to the south of the city. It is home to the Paris-Orly Airport, the second busiest international airport for the city after the more recently built Charles de Gaulle Airport. That said, Orly is home to more domestic flights than Charles de Gaulle.

47. Chili ingredient : STEWED TOMATOES
The full name of the dish that is often called simply “chili” is “chili con carne”, Spanish for “peppers with meat”. The dish was first created by immigrants from the Spanish Canary Islands in the city of San Antonio, Texas (a city which the islanders founded). The San Antonio Chili Stand was a popular attraction at the 1893 Chicago World’s Fair, and that stand introduced the dish to the rest of America and to the world.

51. The Jazz, on scoreboards : UTA
The Utah Jazz professional basketball team moved to their current home in Salt Lake City in 1979. As one might guess from the name, the team originated in New Orleans, but only played there for five seasons. New Orleans was a tough place to be based because venues were hard to come by, and Mardi Gras forced the team to play on the road for a whole month.

52. SeaWorld whale : SHAMU
Shamu was the name of the third orca, or killer whale, ever to be featured in a public exhibition. Shamu starred in a popular SeaWorld show in San Diego in the sixties. After she died in 1971, her name lived on as the name “Shamu” is still used by SeaWorld for its killer whale shows. That original Shamu was retired after she grabbed and refused to let go of the leg of one of her trainers.

53. Wild side of a split personality : MR HYDE
Robert Louis Stevenson’s novella “The Strange Case of Dr. Jekyll and Mr. Hyde” was first published in 1886. There are many tales surrounding the writing of the story including one that the author wrote the basic tale in just three to six days, and spent a few weeks simply refining it. Allegedly, Stevenson’s use of cocaine stimulated his creative juices during those few days of writing.

66. Gillette brand : ATRA
Fortunately for crossword constructors, the Atra razor was introduced by Gillette in 1977. The Atra was sold as the Contour in some markets and its derivative products are still around today.

69. Online site for business reviews : YELP
yelp.com is a website that provides a local business directory and reviews of services. The site is sort of like Yellow Pages on steroids, and the term “yelp” is derived from “yel-low p-ages”.

Down
2. ___ Croft, “Tomb Raider” role : LARA
Lara Croft was introduced to the world as the main character in a pretty cool video game (I thought, back then) called “Tomb Raider”, back in 1996. Lara Croft moved to the big screen in 2001 and 2003, in two pretty awful movie adaptations of the game’s storyline. Angelina Jolie played Croft, and she did a very energetic job.

7. ___ alai : JAI
The essential equipment in the sport of jai alai is the pelota (ball) and the cesta (wicker scoop).

8. Brand of kitchenware : OXO
The OXO line of kitchen utensils is designed to be ergonomically superior to the average kitchen too. The intended user of OXO products is someone who doesn’t have the normal range of motion or strength in the hands e.g. someone suffering from arthritis.

9. ___ State : KENT
Kent State University’s main campus is located in Kent, Ohio. Kent State will forever be associated with student activism and opposition to the Vietnam War in the late sixties and early seventies. The fateful day was May 4, 1970 when members of the Ohio National Guard opened fire on students, killing four protesters and wounding nine.

11. Title hero of a Longfellow poem : PAUL REVERE
“Paul Revere’s Ride” is an 1860 poem by Henry Wadsworth Longfellow. Here are some lines from the work:

A hurry of hoofs in a village street,
A shape in the moonlight, a bulk in the dark,
And beneath, from the pebbles, in passing, a spark
Struck out by a steed flying fearless and fleet;
That was all! And yet, through the gloom and the light,
The fate of a nation was riding that night;
And the spark struck out by that steed, in his flight,
Kindled the land into flame with its heat.

24. Ruckus : ADO
The word “ruckus” is used to mean a commotion, and has been around since the late 1800s. “Ruckus” is possibly a melding of the words “ruction” and “rumpus”.

25. Hi-fi supply : LPS
Hi-fi systems were introduced in the late forties, and is audio equipment designed to give a much higher quality reproduction of sound than cheaper systems available up to that point. “Hi-fi” stands for “high fidelity”.

29. TV’s “___: Cyber” : CSI
“CSI: Cyber” is the youngest show in the incredibly successful franchise of “CSI” crime dramas. I was excited to hear of the concept behind “CSI: Cyber”, but have given up watching the show after a few episodes …

37. Thanksgiving ___ : EVE
Thanksgiving Day was observed on different dates in different states for many years, until Abraham Lincoln fixed the date for the whole country in 1863. Lincoln’s presidential proclamation set that date as the last Thursday in November. In 1941, President Franklin D. Roosevelt moved the holiday to the fourth Thursday in November, arguing that the earlier date would give the economy a much-needed boost.

44. Cry made with a head slap : D’OH!
“The Simpsons” is one of the most successful programs produced by the Fox Broadcasting Company. Homer Simpson’s catchphrase is “D’oh!”, which became such a famous exclamation that it has been included in the Oxford English Dictionary (OED) since 2001. “D’oh!” can be translated as “I should have thought of that!”

49. Certain protozoan : AMOEBA
An ameba (or “amoeba”, as we spell it back in Ireland) is a single-celled microorganism. The name comes from the Greek “amoibe”, meaning change. The name is quite apt, as the cell changes shape readily as the ameba moves, eats and reproduces.

54. Critical time : D-DAY
The most famous D-Day in history was June 6, 1944, the date of the Normandy landings in WWII. The term “D-Day” is used by the military to designate the day on which a combat operations are to be launched, especially when the actual date has yet to be determined. What D stands for seems to have been lost in the mists of time although the tradition is that D just stands for “Day”. In fact, the French have a similar term, “Jour J” (Day J), with a similar meaning. We also use H-Hour to denote the hour the attack is to commence.

58. Tiny bit : IOTA
Iota is the ninth letter in the Greek alphabet. We use the word “iota” to portray something very small, as it is the smallest of all Greek letters.