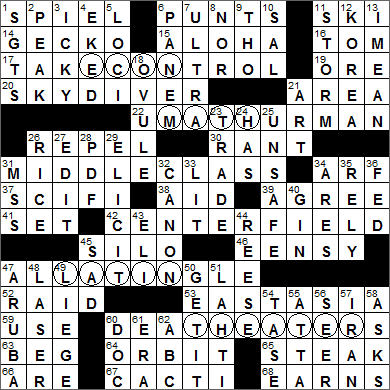 CROSSWORD SETTER: Tom McCoy
THEME: Middle Class and Centerfield … each of today’s themed answers contains a hidden word that is a CLASS or FIELD of study. And, that hidden word is at the MIDDLE or CENTER of the answer, and is shown by circled letters:

Today’s Wiki-est, Amazonian Googlies
Across
1. Infomercial presentation, e.g. : SPIEL
A spiel is a lengthy speech or argument designed to persuade, like a sales pitch. “Spiel” comes to us from German, either directly (“spiel” is the German for “play”) or via the Yiddish “shpil”.

14. Scaly wall-scaler : GECKO
The word “gecko” comes from an Indonesian/Javanese word “tokek”, which is imitative of the reptile’s chirping sound. In making such a sound, geckos are unique in the world of lizards. More interesting to me than a gecko’s chirping is its ability to cling to walls and to other vertical surfaces. Their feet are specially adapted with “toes” that make extremely intimate, close contact to a surface. The toes have millions of hairs called setae that enable the clinging. It isn’t suction that supports them, but rather van der Waals forces (weak “gravitational” attractions). Fascinating stuff …

15. HI hi : ALOHA
The Hawaiian word “Aloha” has many meanings in English: affection, love, peace, compassion and mercy. More recently “aloha” has come to mean “hello” and “goodbye”, but only since the mid-1800s.

16. QB Brady : TOM
Tom Brady plays quarterback for the New England Patriots. Brady is from San Mateo, California, which isn’t very far from here. Brady dated actress Bridget Moynahan for a couple of years, and the pair have a child together.

19. Bauxite or galena : ORE
Bauxite is an aluminum ore. It takes its name from the absolutely beautiful village of Les Baux in southern France, the home of the geologist who first recognized that the mineral was a useful source of the metal.

20. Fall guy? : SKYDIVER
The term “parachute” was coined by Frenchman François Blanchard, from “para-” meaning “defence against” and “chute” meaning “a fall”.

21. What pi may be used to find : AREA
The ratio of a circle’s circumference to its diameter is a mathematical constant, which we denote with the Greek letter pi (π). The ratio pi can be used to calculate the area of a disk, by multiplying the constant by the square of the radius (πr2).

22. Female lead in “Gattaca” and “Kill Bill” : UMA THURMAN
Robert Thurman was the first westerner to be ordained a Tibetan Buddhist monk. Robert raised his children in the Tibetan Buddhist tradition and called his daughter “Uma” as it is a phonetic spelling of the Buddhist name “Dbuma”. Uma’s big break in movies came with her starring role in Quentin Tarantino’s 1994 hit “Pulp Fiction”. My favorite Uma Thurman film is the wonderful 1996 romantic comedy “The Truth About Cats and Dogs”.

“Gattaca” is a science fiction movie starring Ethan Hawke and Uma Thurman that was released in 1997. Set in the not-too-distant future, the film describes a society in which potential children are preselected so that they inherit the most desirable traits from their parents. The title “Gattaca” is the space agency featured in the storyline. I haven’t seen this movie, but it’s on my “must see” list …

34. Sound from a terrier : ARF!
Most terrier breeds of dog originated in the British Isles. Terriers were developed as working dogs, with the job of controlling populations of rats, rabbits and foxes by rooting them out above and below the ground. The name “terrier” comes via Middle French from the the Latin “terra” meaning “earth”, a reflection of the breeds habit of burrowing into the earth looking for its prey.

37. Genre of Isaac Asimov’s “Foundation” : SCI-FI
Isaac Asimov was a wonderful science fiction writer, and a professor of biochemistry. He was a favorite author as I was growing up and I must admit that some hero worship on my part led me to study and work as a biochemist for a short while early in my career. My favorite of his works is the collection of short stories called “I, Robot”, although Asimov’s most famous work is probably his “Foundation” trilogy of novels.

45. Barn neighbor : SILO
“Silo” is a Spanish word that we absorbed into English, originally coming from the Greek word “siros” that described a pit in which one kept corn.

52. F.B.I. action : RAID
What we know today as the FBI was set up in 1908 as the BOI, the Bureau of Investigation. The name was changed to the Federal Bureau of Investigation in 1935. The Bureau was set up at the behest of President Theodore Roosevelt. President Roosevelt was largely moved to do so after the 1901 assassination of President McKinley, as there was a perception that anarchists were threatening law and order. The FBI’s motto uses the organization’s initialism, and is “Fidelity, Bravery, Integrity”.

Lord Voldemort (born Tom Marvolo Riddle) is the main “bad guy” in the “Harry Potter” series of books. I heard author J. K. Rowling on the radio some time back and she tells us that “Voldemort” is supposed to be pronounced with a silent “t” on the end, so it sounds kind of French. But when the movies came out the actors went with the hard “t”, and that’s the pronunciation that seems to prevail now.

65. What might get an A1 application? : STEAK
The original A.1. steak sauce comes from a recipe created for King George IV of England by one of his personal chefs in 1824. King George declared it to be “A.1.”, and the rest is history.

Down
1. Pepper and others: Abbr. : SGTS
Sgt. Pepper’s Lonely Heart Club Band was the alter-ego of the Beatles and was the title of a famous studio album released in 1967.

8. “Neither snow ___ rain …” : NOR
There is no official creed or motto for the US Postal Service. However, there is the oft-quoted inscription that is posted (pun!) over the entrance to the James Farley Post Office in New York City:

Neither snow nor rain nor heat nor gloom of night stays these couriers from the swift completion of their appointed rounds.

10. “My Gal ___” (song classic) : SAL
“My Gal Sal” is a song written by composer Paul Dresser. “My Gal Sal” is also the name of the movie recounting Dresser’s life made in 1942. It stars Victor Mature as Dresser, and Rita Hayworth as Sally “Sal” Elliott.

12. Land partitioned in 1945 : KOREA
Korea was occupied by the Japanese military from 1910 until Japan surrendered at the end of WWII in 1945. While the UN was working towards a trusteeship administration for Korea, the Soviet Union managed the Korean Peninsula north of the 38th parallel and the US managed the south. The UN’s plans came to nothing as the Cold War dictated the establishment of the two separate states of North Korea and South Korea. North Korea invaded the South in 1950, leading to the Korean War. After three years of fighting, the border between the two states became the demarcation line between the two military forces on the day the Armistice Agreement was signed. That line runs diagonally across the 38th parallel, and is better known as the Korean Demilitarized Zone (DMZ).

18. Future seed : OVULE
As we all remember from botany class, an “ovule” is a small structure in many plants that develops into the seed after fertilization. We do remember, don’t we?

28. File name ending in Adobe Acrobat : PDF
Portable Document Format (PDF) is a file format introduced by Adobe Systems in 1993. PDF documents can be shared between users and read using many different applications, making them more universally accessible than documents saved by one particular program.

31. Some submissions: Abbr. : MSS
An editor (ed.) has to wade his or her way through a manuscript (MS) that has been submitted.

34. God whose name is a homophone of a zodiac sign : ARES
The Greek god Ares is often referred to as the Olympian god of warfare, but originally he was regarded as the god of bloodlust and slaughter. Ares united with Aphrodite to create several gods, including Phobos, Deimos and Eros. The Roman equivalent to Ares was Mars. Ares was the son of Zeus and Hera.

40. Cotton ___ : GIN
The term “cotton gin” is a contraction of “cotton eng-ine”. The gin is a machine that mechanically separates cotton fibers from the cotton seed. The modern version of the cotton gin was invented by Eli Whitney in 1793.

43. ___ Whitney : ELI
The inventor Eli Whitney is a best known for inventing the cotton gin. Whitney also came up with the important concept of “interchangeable parts”. Parts that are interchangeable can be swapped out of equipment or perhaps used in related designs.

44. Witherspoon of “Legally Blonde” : REESE
Reese is not actually actress Witherspoon’s given name. She started out life as Laura Jeanne Witherspoon. Reese is her mother’s maiden name.

“LEGALLY blonde” is a 2001 comedy film starring Reese Witherspoon as a girlish sorority president who heads to Harvard to earn a law degree. “LEGALLY blonde” was successful enough to warrant two sequels as well as a spin-off musical that played most successfully in London’s West End (for 974 performances).

47. Dutch Caribbean island : ARUBA
Aruba is one of the so-called ABC Islands. The ABC Islands is the nickname given to the three westernmost islands of the Leeward Antilles in the Caribbean. The nickname comes from the first letters of the island names: Aruba, Bonaire and Curaçao. All three of the ABC Islands are part of the Kingdom of the Netherlands.

49. Feudal lord : LIEGE
A liege was a feudal lord, one to whom service or allegiance was owed under feudal law. “Liege” was also the term used for one who owed allegiance or service to a lord. Very confusing …

51. Christine of “Chicago Hope” : LAHTI
Christine Lahti is an actress probably best known for playing Dr. Kate Austen on the TV medical drama “Chicago Hope”. If you read “The Huffington Post” you might run across her as well, as Lahti is a contributing blogger.

54. Shock, in a way : TASE
Victor Appleton wrote a novel for young adults called “Tom Swift and His Electric Rifle”. The company that developed the TASER electroshock weapon named its product as a homage to the novel. The acronym TASER stands for “Thomas A. Swift’s Electric Rifle”.

55. The U.N.’s Kofi ___ Annan : ATTA
Kofi Annan is a diplomat from Ghana who served as General Secretary of the UN for ten years until the beginning of 2007. Annan was born into an aristocratic family, and had a twin sister named Efua Atta. Efua and Kofi shared the middle name “Atta”, which means “twin” in the Akan language of Ghana. Annan attended the MIT Sloan School of Management from 1971-72, and graduated with a Master of Science degree.

57. Persia, nowadays : IRAN
Before 1935, the country we know today as Iran was called Persia by the Western world. The official name of the country since the Iranian Revolution of 1979 is the “Islamic Republic of Iran”.

60. File name ending in Word : DOC
Microsoft Word documents have the “.doc” file extension, at least those prior to Microsoft Office 2007. The extension used now is “.docx”.