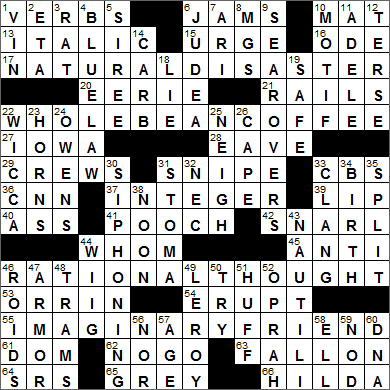 CROSSWORD SETTER: John Guzzetta
THEME: Number Play … each of today’s themed answers starts with a type of NUMBER, with a very mathematical reveal referring to INTEGERS:

Today’s Wiki-est, Amazonian Googlies
Across
1. Many Latin ones end in -are : VERBS
Latin verbs are divided into four regular conjugations. The infinitive form of each of these conjugations are:

6. Some jazz sessions : JAMS
The use of “jam”, to mean an improvised passage performed by a whole jazz band, dates back to the late twenties. This gave rise to “jam session”, a term used a few years later. The use of “jam” in this context probably stems from the meaning of “jam” as something sweet, something excellent.

13. Right-leaning : ITALIC
Italic type leans to the right. The style is known as “italic” because the stylized calligraphic form of writing originated in Italy, probably in the Vatican.

21. Hobos’ conveyances : RAILS
No one seems to know for sure how the term “hobo” originated, although there are lots of colorful theories. My favorite is that “hobo” comes from the first letters in the words “ho-meward bo-und”, but it doesn’t seem very plausible. A kind blog reader tells me that according to Click and Clack from PBS’s “Car Talk” (a great source!), “hobo” comes from “hoe boy”. Hoe boys were young men with hoes looking for work after the Civil War. Hobos differed from “tramps” and “bums”, in that “bums” refused to work, “tramps” worked when they had to, while “hobos” traveled in search of work.

22. Grinder input : WHOLE BEAN COFFEE (giving “whole numbers”)
In mathematics, the “whole numbers” are the natural, counting numbers (1, 2, 3, etc), with the important inclusion of the number zero. Zero is usually excluded from the list of “natural numbers”.

27. Caucus locale : IOWA
The Iowa caucuses have been the first major electoral event in the nominating process for President since 1972.

28. Mansard overhang : EAVE
A mansard roof is a type of hip roof with two slopes on each side. The lower part of the roof has the steepest slope and is penetrated by several dormer windows. The style of roof takes its name from the French Baroque architect François Mansart.

29. Regatta teams : CREWS
The word “regatta” is Venetian dialect and was originally used to describe boat races among the gondoliers of Venice on the Grand Canal back in the mid-1600s.

31. Attack from a blind, say : SNIPE
A hunting blind is a device used by hunters to conceal themselves.

33. Airer of Super Bowl 50 : CBS
The 2015-season Super Bowl was played on 7th February 2016, with the Denver Broncos emerging victorious over the Carolina Panthers. Tradition dictates that Super Bowls are numbered using Roman numerals, which would have resulted in the name “Super Bowl L”. It was decided to temporarily drop the Roman numerals and go with “Super Bowl 50” instead.

36. “This is ___” (TV slogan) : CNN
CNN (Cable News Network) was launched in 1980 by the Turner Broadcasting System, and was the first television channel in the world to provide news coverage 24 hours a day.

44. Pronoun in letter greetings : WHOM
To whom it may concern …

53. Hatch of Utah : ORRIN
Orrin Hatch is a Republican Senator from Utah. Hatch also quite the musician, and plays the piano, violin and organ. He has composed various compositions, including a song called “Heal Our Land” that was played at the 2005 inauguration of President George W. Bush.

61. ___ Pérignon : DOM
Dom Pérignon is the name given to the prestige label of champagne from Moët et Chandon, the French winery. The label’s name honors the Benedictine monk, Dom Pérignon, who helped to improve the quality and production of champagne in the early 18th century. Although Dom Pérignon made major contributions to champagne production, many of the stories in which he figures are just myths. He did not “invent” champagne, nor sparkling wine in general. Nor did he say the famous words, “Come quickly, I am drinking the stars!”. That lovely line first appeared in a print advertisement in the late 1800s!

63. Leno’s late-night successor : FALLON
Jimmy Fallon was a cast member for a number of years on “Saturday Night Live” before getting his own talk show in 2009, “Late Night with Jimmy Fallon”. Fallon took over “The Tonight Show” from Jay Leno in 2014.

65. ___ Goose vodka : GREY
Grey Goose is a vodka that is produced in France. The beverage was developed especially for the American market using resources and expertise available in the French Cognac region.

66. Broom-___ of the comics : HILDA
“Broom-Hilda” is a comic strip created by Russell Myers that has been running since 1970. The idea for Broom-Hilda came from Myers’s business manager, Elliot Caplin (brother of Al Capp, the creator of “Li’l Abner”).

Down
1. Car registration fig. : VIN
Vehicle Identification Numbers (VINs) were introduced by the automotive industry in 1954.

2. H, on a fraternity house : ETA
Eta is the seventh letter of the Greek alphabet, and is a forerunner of our Latin character “H”. Originally denoting a consonant, eta was used as a long vowel in Ancient Greek.

4. Sunday shopping ban : BLUE LAW
“Blue Laws” are prohibitive statutes designed to restrict activities on a Sunday for religious reasons. There seem to be a few dubious etymologies published to explain the use of the term “blue” in such a context. The most credible derivation seems to be point at the supporters of Oliver Cromwell in the British Parliament of the mid-17th century, who were called “blue-stockings”.

6. Herod’s realm : JUDEA
Herod the Great was made king of the Roman province of Judea (now the southern part of Israel). Herod the Great’s son was Herod Antipas, the Herod who appears in the New Testament in the stories of the execution of Jesus of Nazareth and John the Baptist.

7. “Exodus” hero ___ Ben Canaan : ARI
“Exodus” is a wonderful novel written by American writer Leon Uris, first published in 1947. The hero of the piece is Ari Ben Canaan, played by Paul Newman in the 1960 film adaptation directed by Otto Preminger.

8. Classic British sports cars : MGS
My neighbor used to keep his MG Midget roadster in my garage (away from his kids!) back in Ireland many moons ago. The Midget was produced by MG division of the British Motor Corporation from 1961 to 1979, with the MG acronym standing for “Morris Garages”.

11. Singer with the 2015 album “25” : ADELE
Adele is the stage name of English singer Adele Adkins. Adele’s debut album is “19”, named after the age she was during the album’s production. Her second album was even more successful than the first. Called “21”, the second album was released three years after the first, when Adele was three years older. Here 2015 studio album was predictably titled “25”, and it broke all sorts of records in the just first week of sales.

14. Potato or pasta, informally : CARB
Only relatively small amounts of carbohydrate can be stored by the human body, but those stores are important. The actual storage molecule is a starch-like polysaccharide called glycogen, which is found mainly in the liver and muscles. Glycogen is a quick source of energy when required by the body. Most of the body’s energy is stored in the form of fat, a more compact substance that is mobilized less rapidly. Endurance athletes often eat meals high in carbohydrate (carbo-loading) a few hours before an event, so that their body’s glycogen is at optimum levels.

22. Pagan belief : WICCA
Wicca is a relatively new phenomenon, a Neopagan religion that developed in the twentieth century. A follower of Wicca is called a Wiccan or a Witch.

A pagan is someone who holds religious beliefs that are different from the main religions of the world. In classical Latin, “paganus” was a villager, a rustic.

24. Jesse of the 1936 Olympics : OWENS
Jesse Owens is famous for winning four gold medals at the Berlin Olympic Games in 1936, much to the chagrin of Adolph Hitler. Jesse’s real name was James Cleveland Owens, and he went by “JC” as a child. However, his Alabama accent was misconstrued at school when his family moved to Cleveland, so teachers and classmates called him “Jesse” instead of “JC”, and the name stuck.

31. Leaf pore : STOMA
Stomata (the usual plural of stoma, not “stomas”) are pores found under almost every leaf, clearly visible under a simple microscope. The stomata take in air rich in carbon dioxide. Through the process of photosynthesis, the plants generate oxygen, which is released back into the air though the same stomata.

32. Japanese PC maker : NEC
NEC is the name that the Nippon Electric Company chose for itself outside of Japan after a rebranding exercise in 1983.

35. The 7-10 is a nasty one : SPLIT
In ten pin bowling, a split takes place when the number-one pin (headpin) is a knocked down with the first ball and two or more non-adjacent pins are left standing. The most difficult split to deal with is the infamous 7-10 split, where just the rear pins at the extreme right and left remain standing.

38. It comes before one : NOON
Our word “noon”, meaning “midday”, comes from the Latin “nona hora” that translates as “ninth hour”. Back in Ancient Rome, the “ninth hour” was three in the afternoon. Over the centuries, traditions such as church prayers and “midday” meals shifted from 3 p.m. to 12 p.m., and so “noon” became understood as 12 noon.

44. Kristen of “Bridesmaids” : WIIG
Kristen Wiig is a comic actress who appears on “Saturday Night Live”. She also made an appearance on the first season of Spike TV’s quirky “The Joe Schmo Show”, playing “Dr. Pat”. More recently she co-wrote and starred in the 2011 hit film “Bridesmaids”.

46. Bodybuilder’s dirty secret, informally : ROIDS
Steroids are found commonly in nature, with familiar examples being cholesterol and testosterone. The controversial class of drugs called anabolic steroids (known informally as “roids” or simply “steroids”) are artificially produced chemicals designed to mimic the effect of the male sex hormone, testosterone. They are termed “anabolic” as they build up cellular tissue (particularly muscle) in a process called anabolism. Taking anabolic steroids can be termed “juicing”, and the aggressive behavior that can be a side-effect is known as “roid rage”.

48. J.F.K.’s AirTrain and others : TRAMS
AirTrain JFK is a rail connection between John F. Kennedy Airport and both the LIRR and the New York City Subway. The trains run on elevated rails, and the service opened for business in 2003.

51. Fit of pique : HUFF
Our term “pique” meaning a “fit of ill feeling” is a French word meaning a “prick, sting, irritation”.

52. Celeb parodied by Maya Rudolph on “S.N.L.” : OPRAH
Maya Rudolph is riding high right now, having gotten her break as a comedian on “Saturday Night Live”. Rudolph is now making a lot of appearances as an actress, both on television and in the movies. On the small screen she plays a leading role in “Up All Night” alongside Christina Applegate. On the big screen she had a prominent role in the relatively recent hit “Bridesmaids”.