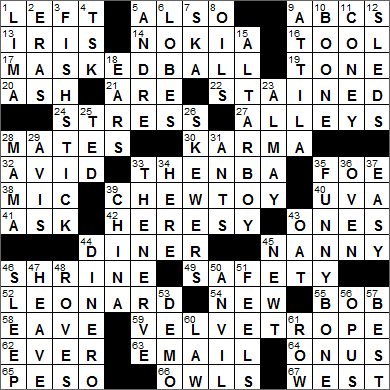 CROSSWORD SETTER: Ian Livengood
THEME: Chew Toy … each of today’s themed answers ends with something that might be a puppy’s CHEW TOY:

39A. Puppy amuser … or the end of the answer to each starred clue : CHEW TOY

Today’s Wiki-est, Amazonian Googlies
Across
1. Liberals, with “the” : LEFT
The concept of left-right politics started in France during the French Revolution. When members of France’s National Assembly convened in 1789, supporters of the King sat to the President’s right, and supporters of the revolution to the President’s left. The political terms “left” and “right” were then coined in the local media and have been used ever since.

13. A pupil is in the middle of it : IRIS
The iris is the colored part of the eye with an aperture in the center that can open or close depending on the level of light hitting the eye.

The pupil of the eye is the “hole” located in the center of the iris through which light enters the retina. The term “pupil” came into English via French from the latin “pupilla”, which is the diminutive form of “pupa” meaning “girl, doll”. The term came about due to the tiny doll-like image that one can see of oneself when looking into the center of another’s eyes.

14. Finnish-based telecom : NOKIA
I do enjoy classical guitar music, but there isn’t a huge choice on CD. There is one very special piece called “Gran Vals” by Francisco Tárrega, written in 1902. This piece has a unique reputation as it contains a phrase that it is the most listened to piece of music in the whole world. Just a few bars into the work one can hear the omnipresent Nokia ring tone!

20. Something an e-cig lacks : ASH
An electronic cigarette (also called an “e-cigarette”) is a battery-powered device that resembles a real cigarette. The e-cigarette vaporizes a solution that contains nicotine, forming a vapor that resembles smoke. The vapor is inhaled, delivering the nicotine into the body. The assumption is that an e-cigarette is healthier than a regular cigarette as the inhaled vapor is less harmful than inhaled smoke. But, that may not be so …

27. Bowling lanes : ALLEYS
Bowling has been around for an awfully long time. The oldest known reference to the game is in Egypt, where pins and balls were found in an ancient tomb that is over 5,000 years old. The first form of the game to come to America was nine-pin bowling, which had been very popular in Europe for centuries. In 1841 in Connecticut, nine-pin bowling was banned due to its association with gambling. Supposedly, an additional pin was added to get around the ban, and ten-pin bowling was born.

28. Endings of chess games : MATES
In the game of chess, when the king is under immediate threat of capture it is said to be “in check”. If the king cannot escape from check, then the game ends in “checkmate” and the player in check loses. In the original Sanskrit game of chess, the king could actually be captured. Then a rule was introduced requiring that a warning be given if capture was imminent (today we announce “check!”) so that an accidental and early ending to the game doesn’t occur.

30. Cosmic destiny : KARMA
Karma is religious concept with its basis in Indian faiths. Karma embraces the notion of cause and effect. Good deeds have good consequences at some later point in one’s life, future life, or afterlife and vice versa.

42. Crime that Joan of Arc was charged with : HERESY
Joan of Arc (also “Jeanne d’Arc”, her birth name) led the French Army successfully into battle a number of times during the Hundred Years War with England. When she was eventually captured, Joan was tried in Rouen, the seat of the occupying English government in France at that time. There she was burned at the stake having been found guilty of heresy. Joan of Arc was canonized some 600 years later, in 1920, and is now one of the patron saints of France.

45. Job for Mrs. Doubtfire or Mary Poppins : NANNY
The 1993 comedy “Mrs. Doubtfire” is based on a 1987 novel called “Madame Doubtfire” by Anne Fine. The movie is set and was filmed in San Francisco. The title role is played by Robin Williams who spent most of the movie dressed as the female Mrs. Doubtfire. Perhaps not surprisingly, the movie won the Oscar for Best Makeup.

The “Mary Poppins” series of children’s novels was written by Australian-born English writer and actress P. L. Travers. Mary Poppins is a magical children’s nanny with a best friend called Bert. In the famous musical film adaptation of the Mary Poppins stories, Poppins is played by Julie Andrews and Bert is played Dick Van Dyke.

49. It’s worth two points in football : SAFETY
In American football, a “safety” is a scoring play worth two points. A safety can be scored in several ways. For example, a ballcarrier tackled in his own end zone, or a foul committed by the offense in their own end zone. The safety was introduced in collegiate football in the 1880s, when it was called a “safety touch-down”.

52. Conductor Bernstein : LEONARD
The composer and conductor Leonard Bernstein was a man who made great strides in bringing classical music to the masses. He gave numerous lectures on the subject on television. Indeed, one of my favorite recordings of the instructive “Peter and the Wolf” by Prokofiev, is conducted and narrated by Bernstein.

63. AOL service : EMAIL
AOL was a leading Internet Service Provider (ISP) in the 1980s and 1990s. The company does still provide dial-up access to the Internet for some subscribers, but most users now access AOL using faster, non-AOL ISPs.

65. Money in Mexico : PESO
The coin called a “peso” is used in many Spanish-speaking countries around the world. The coin originated in Spain where the word “peso” means “weight”. The original peso was what we know in English as a “piece of eight”, a silver coin of a specific weight that had a nominal value of eight “reales”.

Down
1. World capital whose name is a kind of bean : LIMA
The lima bean is also known as the butter bean. The lima bean was introduced to Europe from the area around Lima, Peru, hence the name.

3. *Food item often dipped in ketchup or tartar sauce : FISH STICK
Fish sticks are known as fish fingers in the UK and Ireland.

The term “ketchup” may be of Chinese origin. One suggestion is that the name comes from “kôe-chiap”, meaning the brine of pickled fish. The name may also come from the Chinese “jyutping”, meaning “tomato sauce”.

7. Jamaican music genre : SKA
Ska originated in Jamaica in the late fifties and was the precursor to reggae music. No one has a really definitive etymology of the term “ska”, but it is likely to be imitative of some sound.

9. Notable Hun : ATTILA
In his day, Attila the Hun was the most feared enemy of the Roman Empire, until he died in 453 AD. Attila was the leader of the Hunnic Empire of central Europe and was famous for invading much of the continent. However, he never directly attacked Rome.

10. Frontiersman Daniel : BOONE
Daniel Boone was a pioneer and folk hero. For frontiersman Boone, the frontier was what we now call the state of Kentucky. He led the building of the Wilderness Road through the famous Cumberland Gap in the Appalachians, a route subsequently taken by hundreds of thousands of migrants into Kentucky. Boone fought in the Revolutionary War with distinction, and after the war returned to Kentucky and got himself into land speculation. He became mired in debt, forcing him to emigrate to Missouri to settle down on land that was at that time owned by the French. It was there that he spent the last decades of his life.

11. New York’s ___ Island : CONEY
“Cony” (or “coney”) is an old English word for rabbit or rabbit fur, and Coney Island in New York takes its name from the same root. The Dutch used the name “Conyne Eylandt” (Rabbit Island) after the large population of rabbits that was hunted there.

15. Mass assistant : ALTAR BOY
The principal act of worship in the Roman Catholic tradition is the Mass. The term “Mass” comes from the Late Latin word “missa” meaning “dismissal”. This word is used at the end of the Latin Mass in “Ite, missa est” which translates literally as “Go, it is the dismissal”.

23. Cosmetics brand owned by Revlon : ALMAY
The Almay brand of cosmetics was established back in 1931. Almay was founded by Alfred and Fanny May Woititz, who melded their given names to come up with the brand name (Al-may). The couple were driven to invent the products as Fanny May needed cosmetics that did not irritate her skin.

Revlon was founded in the depths of the Great Depression in 1932, by Charles and Joseph Revson. The “S” in the Revson name was replaced by the “L” from Charles “Lachman”, a chemist who partnered with the two brothers.

26. Shish kebab holders : SKEWERS
The name “kebab” (also “kabob”) covers a wide variety of meat dishes that originated in Persia. In the West, we usually use “kebab” when talking about shish kebab, which is meat (often lamb) served on a skewer. “Shish” comes from the Turkish word for “skewer”.

29. Hertz rival : AVIS
Avis has been around since 1946, and is the second largest car rental agency after Hertz. Avis has the distinction of being the first car rental company to locate a branch at an airport.

35. *Inaptly named part of the elbow : FUNNY BONE
The ulnar nerve runs alongside the ulna (one of the bones in the lower arm). The ulnar nerve is the largest unprotected (not surrounded by muscle or bone) nerve in the human body. The nerve can be touched under the skin at the outside of the elbow. Striking the nerve at this point causes and an electric-type shock, known as hitting one’s “funny bone” or “crazy bone”.

39. Shanghai’s land : CHINA
Shanghai is a major city on the west coast of China that is home to the busiest container port in the world. The name “Shanghai” translates as “Upon-the-Sea”.

44. Money, in Mexico : DINERO
Dinero is the Spanish word for money, as well as a slang term for money here in the US.

45. Politico Gingrich : NEWT
Newt … what a name! Newt Gingrich was born Newton Leroy McPherson in 1943, in Harrisburg, Pennsylvania. Newt’s mother remarried when he was very young and his new father, Robert Gingrich, adopted Newt giving him the Gingrich name.

56. ___ Dei (Catholic group) : OPUS
Opus Dei is Roman Catholic institution that was founded in Spain in 1928, and officially approved by the church in 1950. In 2010, Opus Dei had over 90,000 members, mostly lay people. The institution’s mission is to promote certain aspects of the Roman Catholic doctrine. Opus Dei was portrayed as a sinister organization by Dan Brown in his novel “The Da Vinci Code”.