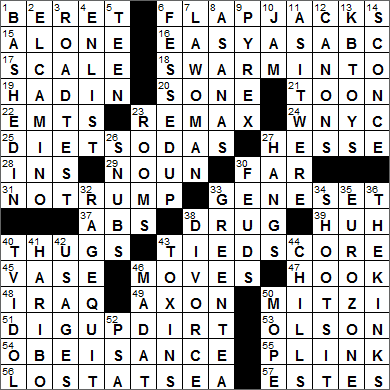 Today’s Wiki-est, Amazonian Googlies
Across
17. Blueprint notation : SCALE
Blueprints are reproductions of technical or architectural drawings that are contact prints made on light-sensitive sheets. Blueprints were introduced in the 1800s and the technology available dictated that the drawings were reproduced with white lines on a blue background, hence the name “blue-print”.

20. Aural measure : SONE
In the acoustic world, the “sone” was introduced as a unit of perceived loudness in 1936.

21. Charlie Brown, e.g. : TOON
Charlie Brown is the main character in the long-running comic strip called “Peanuts”, created by Charles Schulz. Charlie has several persistent frustrations in his life, including an inability to fly a kite. The focus of his kite-flying frustration is the dreaded Kite-Eating Tree.

23. Coldwell Banker competitor : RE/MAX
RE/MAX is an international real estate company headquartered in Denver, Colorado. The name RE/MAX stands for “real estate maximum”, and the company’s logo is a hot air balloon with RE/MAX emblazoned on it.

The real estate company Coldwell Banker was founded in San Francisco, just after the 1906 earthquake.

24. “Radiolab” producer : WNYC
There are two WNYC radio stations, both based in New York City. Both stations (one AM, and one FM) are members of National Public Radio.

“Radiolab” is a very entertaining National Public Radio program broadcast weekly from New York City. The show tackles some profound scientific and philosophical topics, but does so in a very light-hearted way. Recommended …

27. 1946 Goethe Prize winner : HESSE
Hermann Hesse was not only a novelist, but also a poet and a painter. His best known work is probably his 1927 novel “Steppenwolf”.

The Goethe Prize is currently a triennial award made by the city of Frankfurt, Germany. Most recipients are authors, and indeed the prize is named for Frankfurt writer and statesman Johann Wolfgang Goethe.

28. Progressive business: Abbr. : INS
Progressive is a popular auto insurance company, the one that uses the perky character named “Flo” as a spokeswoman. Flo is played by comedienne and actress Stephanie Courtney.

31. Bid for a balanced hand : NO TRUMP
“No-trump” bids are made in the excellent card game of bridge.

33. What clones share : GENE SET
Dolly is the most famous sheep in the world. She was a clone, and she was born in 1996 near Edinburgh in Scotland, grown from a cell taken from the mammary gland of a healthy donor sheep. When asked why she was called Dolly, the scientist responsible said, and I quote:

37. Planks work them : ABS
The plank is an isometric exercise that strengthens the abdominals, as well as the back and shoulder muscles.

40. Gangsta rap characters : THUGS
Gangsta rap is a type of hip hop music with lyrics that reflect the violent lifestyle experienced by some inner-city youth.

48. Former Baath Party stronghold : IRAQ
The Ba’ath Party was founded in Syria in 1947. The party promotes the unification of the Arab world into one nation, and has the motto “Unity, Liberty, Socialism”.

49. White matter component : AXON
A nerve cell is more correctly called a neuron, and the long nerve fiber that is part of a neuron is called the axon. A neuron that has no definite axon is referred to as “apolar” or “nonpolar”. In apolar neurons the nerve impulses radiate in all directions.

50. Gaynor with the one-woman show “Razzle Dazzle!” : MITZI
Mitzi Gaynor’s most famous role has to be Ensign Nellie Forbush in the movie adaptation of the musical “South Pacific”. It is Gaynor who sings the song “I’m Gonna Wash That Man Right Outa My Hair”.

54. Deferential respect : OBEISANCE
“Obeisance” is an attitude of deference usually marked by gestures of respect such as a bow or a curtsey.

56. Like the explorer Henry Hudson : LOST AT SEA
Hudson Bay in northern Canada is the second largest bay in the world, after the Bay of Bengal. Hudson Bay was named by English explorers after Henry Hudson who explored the area in 1610 on his ship “Discovery”. Hudson’s crew mutinied during that voyage and set Hudson and his officers adrift in a small boat. It is presumed that the castaways didn’t survive for very long.

57. ___ Park : ESTES
Estes Park is a town in a beautiful part of the US, in northern Colorado. Estes Park is home to the headquarters of Rocky Mountain National Park. My firefighter brother-in-law was based at that park, so I’ve visited and can attest that it is a gorgeous place to live. He lives in Omaha now. The geography in Omaha is a little different …

5. Many a Snapchat user : TEEN
Snapchat is a messaging system that allows users to send photos and video clips to a limited list of recipients. The photos and clips, called “snaps”, can be viewed for only a few seconds before they are deleted from the recipient’s device and from the Snapchat servers.

6. Came clean : FESSED UP
The term “fess” is most often seen as part of the phrasal verb “to fess up” meaning “to admit to something”. “Fess” is simply a shortened form of “confess”.

8. Ways of sitting in yoga : ASANAS
“Asana” is a Sanskrit word literally meaning “sitting down”. The asanas are the poses that a practitioner of yoga assumes. The most famous is the lotus position, the cross-legged pose called “padmasana”.

9. Test tube material : PYREX
Pyrex glassware is brand name owned by Corning. As well as being used in bakeware and laboratory glassware, Pyrex is often the material of choice for optics in large telescopes used in astronomy. Pyrex is made from borosilicate glass, the main ingredients of which at silica and boron trioxide.

12. Some printers : CANONS
The Japanese company called Canon is largely known in the US for producing quality cameras. The company started out as Precision Optical Industry Laboratory in 1937 making camera bodies. The name was changed in 1947 to Canon.

13. Former chain store for kids : KB TOYS
KB Toys was a chain of toy stores that was founded in 1922, but folded in 2009. The chain was established by Harry and Joseph Kaufman, which gave the store the name “KB”, standing for Kaufman Brothers.

14. Decorative fixture : SCONCE
A sconce is a light fixture that today uses electric bulbs, but in the past used candles and torches. The defining feature of a sconce is that it is supported by a wall and does not have a base that stands on the ground. Usually the light is indirect, projected upwards towards the ceiling.

23. Shares quarters (with) : ROOMS
We use the term “quarters” for a place of abode, especially housing for military personnel. Back in the late 16th century, quarters were a portion (quarter) of a town reserved for a military force.

34. Puts up a jumper, say : SHOOTS IT
That would be in basketball …

35. Western union locale? : EUROZONE
The “eurozone” or “euro area” is a monetary and economic union within the European Union of 19 states (as of today) that use the euro as a shared legal tender and their sole currency. The last nation to adopt the euro was Lithuania, in 2015.

36. British Invasion group : THE KINKS
The Kinks were an English band that participated in the British Invasion of America in the sixties, although only briefly. After touring the US in the middle of 1965, the American Federation of Musicians refused permits for the Kinks to book concerts for four years, apparently in response to some rowdy on-stage behavior by band.

40. Soap dish, possibly? : TV IDOL
The original soap operas were radio dramas back in the fifties. Given the structure of society back then, the daytime broadcasts were aimed at housewives working in the home. For some reason the sponsors of those radio shows, and the television shows that followed, were soap manufacturers like Procter & Gamble, Colgate-Palmolive and Lever Brothers. And that’s how the “soap” opera got its name …

41. Candy company that makes gummy bears : HARIBO
Haribo is confectionary company based in Germany, in the city of Bonn. Founded by Johannes “Hans” Riegel, Sr. in 1920, the company name derives from the first two letters of the words “Hans”, “Riegel” and “Bonn”.

The “It Can Wait” campaign urges people not to text and drive. Some phone companies now offer an auto-reply service that lets callers know that you are driving and cannot respond.