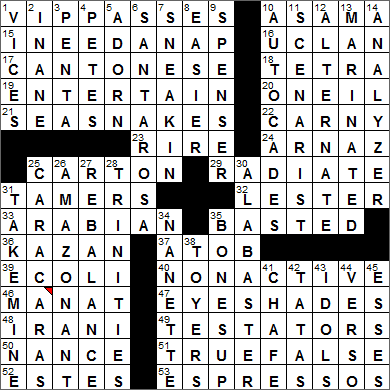 Today’s Wiki-est, Amazonian Googlies
Across
10. Central Honshu volcano : ASAMA
Mount Asama is an active volcano in Japan, the most active volcano on the main island of Honshu. It is located less than 100 miles from Tokyo.

16. Student with the motto “Fiat Lux,” informally : UCLAN
A “UCLAn” is a student at UCLA.

“Fiat lux” from Latin as “Let there be light”. The phrase was originally written in Hebrew, as it comes from the Book of Genesis in the Bible. It is included in the opening verses:

17. Tongue with six phonetic tones : CANTONESE
Cantonese is a language that developed around the city of Guangzhou (also “Canton”) in South China. Cantonese is the language spoken by most of the inhabitants of Hong Kong and Macau, and by the major overseas Chinese communities around the world.

20. Roger of NBC News : O’NEIL
Roger O’Neil is a news reporter who has worked for NBC for over 30 years.

21. Reef swimmers with no gills : SEA SNAKES
I used to live in the Philippines and spent almost every weekend SCUBA diving. Occasionally, I’d come across a sea snake slithering through the water. The rule was always to never swim “above” sea snakes as they don’t have gills and have to come to the surface to breathe. You don’t want to be in the way of a sea snake when it’s coming up for a breath of air, as all sea snakes are venomous and many fatalities have been recorded from their bites.

22. Midway attention-getter : CARNY
“Carny” is American slang, and is short for “carnival worker”.

23. Laugh, in Lyon : RIRE
The city of Lyon in France, is also known as “Lyons” in English.

24. Ball go-with? : ARNAZ
Desi Arnaz was famous for his turbulent marriage to Lucille Ball. Arnaz was a native of Cuba, and was from a privileged family. His father was Mayor of Santiago and served in the Cuban House of Representatives. However, the family had to flee to Miami after the 1933 revolt led by Batista.

32. Jon ___, 2006-14 Red Sox pitcher : LESTER
Jon Lester is pitcher for the Boston Red Sox who pitched a no-hitter against the Kansas City Royals in 2008. Lester was diagnosed with lymphoma in 2006, and made a remarkable recovery from the resulting chemotherapy. He started and won the final game of the World Series the season following his treatments.

33. Like dromedaries and carob trees : ARABIAN
The dromedary, also known as the Arabian Camel or Indian Camel, is the camel that has only one hump. The other species of camel is the Bactrian, which has two humps. The hump of a dromedary contains up to 80 pounds of fat, which can be broken down into water and energy if no food or water is available.

The carob is a tree or shrub in the pea family, mainly grown for its seed pods. The carob seeds are dried or roasted, and when powdered or chipped make a good substitute for chocolate.

36. “The Last Tycoon” was the last film he directed : KAZAN
Elia Kazan won Oscars for best director in 1948 for “Gentleman’s Agreement” and in 1955 for “On The Waterfront”. In 1999 Kazan was given an Academy Lifetime Achievement Award. He also directed “East of Eden”, which introduced James Dean to movie audiences, and “Splendor in the Grass” that included Warren Beatty in his debut role.

“The Love of the Last Tycoon” is an unfinished novel by F. Scott Fitzgerald that was first published in 1941, the year after the author’s death. The novel was adapted into a screenplay by Harold Pinter and released as a movie in 1976 called “The Last Tycoon”. This was the last film directed by Elia Kazan, and it had a remarkable cast including Robert de Niro, Tony Curtis, Robert Mitchum, Jack Nicholson and Donald Pleasance.

39. It has some bad strains : E COLI
Escherichia coli (E. coli) are usually harmless bacteria found in the human gut, working away quite happily. However, there are some strains that can produce lethal toxins. These strains can make their way into the food chain from animal fecal matter that comes into contact with food designated for human consumption.

48. Hormuz habitant : IRANI
The city of Hormuz in Iran sits on the coast, right beside the famed Strait of Hormuz.

50. Jack of “Twin Peaks” : NANCE
Jack Nance was an American actor who worked a lot with director David Lynch. He was one of the stars of the TV series “Twin Peaks” in which he played Pete Martell, a henpecked lumberjack. Coincidentally, the Log Lady in “Twin Peaks” was played by Catherine E. Coulson, one-time wife of Nance.

52. Longtime maker of model rockets : ESTES
Estes Industries was founded by Vernon Estes in 1958, and is the country’s biggest manufacturer of rocket engines for model rockets.

53. Stimulating shots : ESPRESSOS
Espresso is made by forcing extremely hot water, under pressure, through finely ground coffee beans. The result is a thick and concentrated coffee drink, which contains quite a lot of solids and a lot of foam. An espresso machine was first patented in 1884 in Italy, although it was a machine to make the beverage in bulk. The first patent for a machine that made individual measures was applied for in 1901, also in Italy.

Down
2. Like folderol : INANE
“Falderal” (also “folderal”) is a nonsense word that originated in the 18th century. Aptly enough, “folderol” means “nonsense”.

4. ___ Tavern, Manhattan pub that’s over 150 years old : PETE’S
The owners of Pete’s Tavern in the Gramercy Park neighborhood of Manhattan claim that it is the oldest continuously operated tavern in New York City. Pete’s didn’t even refrain from serving alcohol during prohibition, when the establishment sold drinks illegally in the guise of a flower shop.

6. Home of the West Coast’s Empire College : SANTA ROSA
Santa Rosa is the largest city in California’s Wine Country, and the county seat of Sonoma County. The epicenter of the so-called 1906 San Francisco Earthquake was located near Santa Rosa, so there was actually more damage in Santa Rosa, for the size of the city, than there was in San Francisco.

8. Like addition vis-à-vis division : EASIER
We can use the French phrase “vis-à-vis” as a preposition meaning “compared with”. When used as an adverb or adjective, it means “face to face”,which is a more literal translation from French.

9. Private eye in dozens of novels : SPENSER
Robert B. Parker wrote a series of detective novels featuring a Boston private eye named Spenser. The series of novels was continued after Parker’s death by Ace Atkins. The character also features in a TV show called “Spenser: For HIre”, as well as series of “Spenser” films based on the original novels. Spenser was played by Robert Urich on the weekly show, and by Joe Mantegna in three TV movies. We never learn Spenser’s given name.

11. Movie plotter : SCENARIST
“Scenarist” is another word for “screenwriter”.

13. Like satay and sauerbraten : MARINATED
The dish known as “satay” originated in Java, Indonesia and is marinated pieces of meat served on a skewer in a sauce, often a spicy peanut sauce. “Satay” is the Indonesian spelling, and “sate” is the Malay spelling.

Sauerbraten is a traditional pot roast dish of Germany. The name “Sauerbraten” translates as “sour roast”. The cut of meat is soaked for several days in a vinegar-based marinade (hence “sour”) before cooking.

26. It raids and enslaves other colony members : AMAZON ANT
Amazon ants are referred to as “slave-raiding” ants. They rob the pupae from related species and use the captured ants as “slaves”. The “slaves” do virtually all the work needed to maintain the Amazon ant nest, including provision of food and nursing the young.

27. Fix some ledger errors in : REBALANCE
A “ledger” is an account book. The name comes from the Middle English “leggen” meaning “to lay”. The original ledger was a large book “laid” in one particular place, permanently, an example being a breviary in a church.

34. Lepore of women’s fashion : NANETTE
Nanette Lepore is a New York City fashion designer, although she hails from Youngstown, Ohio.

35. Studies hard : BONES UP
The phrasal verb “to bone up” means “to study”, and is student slang that dates back to the 1880s. The term probably comes a series of books used by students back then called “Bohn’s Classical Library”.

42. Byes at Wimbledon : TATAS
An Englishman might say “tata” or “cheerio” instead of “goodbye”. Well, supposedly so!

43. What a heathen might collect : IDOLS
Our term “heathen” comes from an Old English word meaning “neither Christian nor Jewish”.

44. It’s left in a manuscript : VERSO
The left and right pages of a book or magazine are known in publishing circles as verso and recto. Recto comes from the Latin for “right”, and verso comes from the Latin word for “turned”. The idea is that the left side of the page is “turned” and is the reverse of the recto/right side.

45. Business end? : ESSES
There are two letters S (esses) at the end of the word “business”.