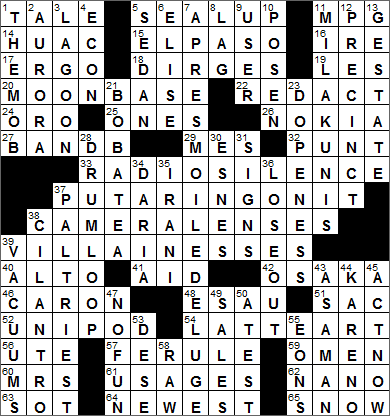 Today’s Wiki-est, Amazonian Googlies
Across
14. Grp. that interrogated Alger Hiss : HUAC
The House Committee on Un-American Activities (HUAC) was formed by the US House of Representatives in 1947 and disbanded in 1975. The House Committee is best remembered for its investigation of the Hollywood film industry in the late forties and fifties which led to the blacklisting of hundreds of people. The House Committee had no formal connection with Senator Joseph McCarthy who was Chairman of the Permanent Subcommittee on Investigations.

Alger Hiss was US government official involved in the establishment of the United Nations. Hiss was accused of being a spy in testimony to the House Committee on Un-American Activities (HUAC) in 1948. Hiss vigorously denied and fought the accusation but eventually served over three years in jail on related charges. The consensus seems to be that Hiss was indeed a spy, but there may be new evidence available when the HUAC’s papers are unsealed in 2026.

15. Home of minor-league baseball’s Chihuahuas : EL PASO
The El Paso Chihuahua are a Triple-A affiliate for the San Diego Padres.

18. Passing scores? : DIRGES
A “dirge” is a slow and mournful musical piece, like a funeral hymn.

22. Black out : REDACT
Our word “redact”, meaning to revise or edit, comes from the past participle of the Latin “redigere” meaning “to reduce”.

24. Coveted medalla material : ORO
In Spanish, a medal (medallo) might be made out of gold (oro).

25. Washington’s capital? : ONES
The US’s first president, George Washington, is on the one-dollar bills produced today. However, when the first one-dollar bill was issued in 1863, it featured a portrait of Salmon P. Chase, President Abraham Lincoln’s Secretary of the Treasury.

26. Finnish-based tech giant : NOKIA
I do enjoy classical guitar music, but there isn’t a huge choice on CD. There is one very special piece called “Gran Vals” by Francisco Tárrega, written in 1902. This piece has a unique reputation as it contains a phrase that it is the most listened to piece of music in the whole world. Just a few bars into the work one can hear the omnipresent Nokia ring tone!

27. Travel mag advertiser : B AND B
An intimate inn (in the US) is a bed & breakfast (B&B). A bed & breakfast back in Ireland is more basic, and is almost always much cheaper than a comparable hotel room.

42. Asian city with an airport on an artificial island : OSAKA
The Japanese city of Osaka used to be called Naniwa, with the name changing to Osaka some time before 1500. “Osaka” can be translated either as “large hill” or “large slope”. Osaka is sometimes referred to as “the Chicago of Japan” as it is a major center of commerce and industry.

46. 1963 Best Actress nominee for “The L-Shaped Room” : CARON
The beautiful and talented French actress and dancer Leslie Caron is best known for her appearances in the classic Hollywood musical films “An American in Paris”, “Lili” and “Gigi”. Although I love the movie “Gigi”, my favorite of her performances is in the comedy war drama “Father Goose” in which she played opposite Cary Grant. Caron has danced with the best, including Gene Kelly, Fred Astaire, Mikhail Baryshnikov and Rudolf Nureyev.

“The L-Shaped Room” is a novel by Lynne Reid Banks that was adapted for the big screen in a 1962 film of the same name.

48. One of a reconciling pair painted by Rubens : ESAU
“The Reconciliation of Jacob and Esau” is a painting by Sir Peter Paul Rubens.

51. Western U.S. capital, to locals : SAC
Sacramento, California’s state capital, was named for the Sacramento River. The river was named by a Spanish explorer, who called it “Rio de los Sacramentos”. This translates as “River of the Blessed Sacrament”.

54. Foam figures? : LATTE ART
Latte art is the name given to the designs that can be drawn on the surface of coffee drinks. Some of those designs can be quite intricate.

57. Old-school rapper? : FERULE
A ferula (also “ferule”) is a flat piece of wood that was used for corporal punishment. A teacher would rap the unfortunate child a few times on the palm of the hand. Sadly, I was on the wrong end of the ferula once or twice in my youth.

61. Spelling bee requests : USAGES
Back in 18th-century America, when neighbors would gather to work for the benefit of one of their group, such a meeting was called a “bee”. The name “bee” was an allusion to the social nature of the insect. In modern parlance, a further element of entertainment and pleasure has been introduced, for example in a “quilting bee”, or even a “spelling bee”.

62. Prefix with bacteria : NANO-
Nanobacteria are a controversial phenomenon. They are tiny structures that do appear to replicate in some way. The controversy is whether or not that can be classified a living organisms.

63. Lush : SOT
Our word “sot” comes from the Old English “sott”, meaning “fool”. The word “sot” started to be associated with alcohol and not just foolery in the late 1500s.

Down
2. Lights on top of a pole? : AURORA
The spectacular aurora phenomenon is seen lighting up the night sky at both poles of the earth (the Aurora Borealis in the north, and the Aurora Australis in the south). The eerie effect is caused by charged particles colliding with atoms at high latitudes.

3. Common pool design : LAGOON
A lagoon-shaped swimming pool has curved edges, and is similar to a free-form design.

5. Cab, customarily : SEDAN
The American “sedan” car is the equivalent of the British “saloon” car. By definition, a sedan car has two rows of seating and a separate trunk (boot in the UK), although in some models the engine can be at the rear of the car.

A hansom cab is a very specific design of horse and buggy that was patented by Joseph Hansom in 1834 in England. The “cab” in the name is short for “cabriolet”, a prior design of carriage on which the hansom was based. It’s from “hansom cab” that we get our modern term “cab”.

6. Noted 19th-century bagatelle dedicatee : ELISE
“Fur Elise” is a beautiful piece of music written by Beethoven, and is also known as “Bagatelle in A Minor”. “Fur Elise” means simply “For Elise”, but sadly no one knows for sure the identity of the mysterious dedicatee.

7. Statement of political hubris : APRES MOI, LE DELUGE
“Après moi, le déluge” is a French phrase that was supposedly used by Louis XV. The king was referring to the impending demise of the French monarchy and predicting the French Revolution. The phrase translates as “After me, the deluge”.

10. Polish city north of Breslau : POSEN
Poznań (also called “Posen” in German) is a Polish city in the west of the country.

13. Carry before delivering : GESTATE
The normal gestation period for humans is 280 days, a little over 9 months. The gestation period can be a little shorter, or longer. Back in 1945, a pregnancy was confirmed at 375 days, just over a year.

23. Excellence, in modern slang : DOPENESS
Never heard of it …

30. Hirelings of old : ESNES
“Esne” is an uncommon word, a synonym for “serf” as best I can tell, a member of the lowest feudal class.

34. High school misanthrope of 1990s-2000s cartoondom : DARIA
“Daria” is an animated television show on MTV. It is a spin-off from the hit series “Beavis and Butthead”.

37. Like 1¢, as costs go : PALTRIEST
The adjective “paltry” comes from an older use of “paltry” as a noun, meaning a “worthless thing”.

38. Salsa ingredient : CILANTRO
What we know here in North America as cilantro is called coriander in the UK and other parts of the world. “Cilantro” is the Spanish name for the herb.

43. How Viola dresses in “Twelfth Night” : AS A MAN
Viola is the main character in Shakespeare’s “Twelfth Night”. Viola is shipwrecked at the beginning of the play in a land ruled by the Duke Orsino. Viola disguises herself as a boy and works for Orsino as a page, and complications ensue …

53. Dis twice? : DESE
The New York dialect of English is sometimes called Brooklynese, I believe. In Brooklynese, we might take “dis”, “dat”, “dese” or “dose”.