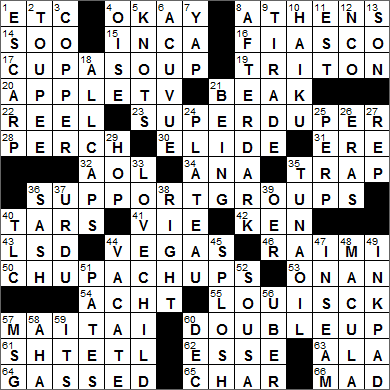 CROSSWORD SETTER: James Mulhern
THEME: Double Up … each of today’s themed answers includes two incidences of the letter-pair UP:

17A. Powdered lunch product from Lipton : CUP-A-SOUP
23A. Just marvelous : SUPER-DUPER
36A. Alcoholics Anonymous and others : SUPPORT GROUPS
50A. Confectionery brand with a logo designed by Salvador Dalí : CHUPA CHUPS

Today’s Wiki-est, Amazonian Googlies
Across
8. Home of Plato’s Academy : ATHENS
The Greek philosopher Plato founded his school called “the Academy” circa 387 BC in Athens. The site Plato chose for his school was a walled-off grove of olive trees that lay just outside the city. The grove was sacred, dedicated to the goddess Athena, but named “Akademia” after a mythological hero called Akademos. So, it is the mythical Akademos who ultimately gives us our word “academy”.

15. Ancient South American : INCA
The Inca Empire was known as the Tawantinsuyu, which translates as “land of the four quarters”. The Inca Empire was a federal organization having a central government that sat above four “suyu” or “quarters”, four administrative regions.

16. Complete mess : FIASCO
Back in the mid-1800s, “fiasco” was theater slang meaning “failure in performance”. The meaning morphed soon after into any kind of failure or flop. The term evolved from the Italian “far fiasco”, a phrase that the same meaning in Italian theater, but translated literally as “make a bottle”. It turns out that “fiasco” and “flask” both derive from the Latin “flasco” meaning “bottle”.

19. Moon of Neptune : TRITON
Triton is the largest moon of Neptune, and is named after the Greek sea god (Neptune is the Roman sea god). Triton is unique in our solar system in that it has a “retrograde orbit”, meaning that it orbits Neptune in the opposite direction to the planet’s rotation.

20. Digital device used to access Hulu and Netflix : APPLE TV
Hulu.com is a website providing streaming video of full television shows. It is a joint venture of NBC and Disney, and so features a lot of their content. The service is free and is supported by advertising, but you can sign up for a premium subscription and get access to more shows. A lot of younger folks seem to use it a lot …

30. Skip, as a sound : ELIDE
“To elide” is to pass over, omit or slur a syllable when speaking.

32. Former Time Warner partner : AOL
AOL’s “first” Initial Public Offering was in 1992. Years later the company was picked up by Time Warner (not a great investment for Time Warner, it turned out). AOL was spun off as a separate entity again in 2009 and the new company had a “second” IPO that same year.

34. Commercial suffix with Tropic : -ANA
The Tropicana company is most famous for its orange juice. The company is headquartered in Chicago, where not many oranges are grown …

36. Alcoholics Anonymous and others : SUPPORT GROUPS
Alcoholics Anonymous (AA) was founded in 1935, by Bill Wilson and Dr. Bob Smith in Akron, Ohio. As the organization grew, the guiding principles established by the founders were formatted into a 12-step program that was in place by the forties.

40. Seamen : TARS
A Jack Tar, or just “tar”, was a seaman in the days of the British Empire. The term probably arose due to a sailor’s various uses of tar back then, including waterproofing his clothes and using tar in his hair to slick down his ponytail.

42. When repeated, a popular puzzle : KEN
KenKen is an arithmetic and logic puzzle invented quite recently, in 2004 by a Japanese math teacher named Tetsuya Miyamoto. “Ken” is the Japanese word for “cleverness”.

43. Acid : LSD
LSD (colloquially known as “acid”) is short for lysergic acid diethylamide. A Swiss chemist called Albert Hofmann first synthesized LSD in 1938 in a research project looking for medically efficacious ergot alkaloids. It wasn’t until some five years later when Hofmann ingested some of the drug accidentally that its psychedelic properties were discovered. Trippy, man …

44. “The Hangover” setting : VEGAS
“The Hangover” is a comedy film released in 2009. The action revolves around a bachelor party in Las Vegas. The critics liked this one, although I didn’t really enjoy it too much.

46. Hollywood director Sam : RAIMI
Sam Raimi is a very successful director and producer, responsible for the “Spider-Man” series of films among others, and TV series’ such as “Xena: Warrior Princess”.

50. Confectionery brand with a logo designed by Salvador Dalí : CHUPA CHUPS
Chupa Chups is a line of lollipops and other candy products that was introduced in 1958. The brand comes from the Spanish “chupar” meaning “to suck”.

55. Stand-up comedian with multiple Emmys : LOUIS CK
“Louis C.K.” is the stage name of comedian Louis Szekely. The family name “Szekely” is Hungarian, and “CK” is an approximation of the name in English.

57. Drink that gets its name from the Tahitian word for “good” : MAI TAI
The Mai Tai cocktail is strongly associated with the Polynesian islands, but the drink was supposedly invented in 1944 in Trader Vic’s restaurant in Oakland, California. The name comes from “Maita’i”, the Tahitian word for “good”. One recipe is 6 parts white rum, 3 parts orange curaçao, 3 parts Orgeat syrup, 1 part rock candy syrup, 2 parts fresh lime juice, all mixed with ice and then a float added of 6 parts dark rum.

61. Town with Yiddish speakers : SHTETL
The Yiddish word for “town” is “shtot”, and so “shtetl” is the diminutive form meaning “small town”.

66. “Spy vs. Spy” magazine : MAD
“Spy vs. Spy” is a comic strip that has run in “Mad” magazine continuously since 1961. It was drawn by Antonio Prohias, a refugee from Cuba, until his retirement. The early storyline was very fitting for the times, a statement about the futility of the arms race, detente and the Cold War.

Down
1. Steep slope around a rampart : ESCARP
An escarp or escarpment is a steep slope or cliff. The term is also used for the inner wall of a ditch that is dug around a fortification.

3. Statue of Liberty material : COPPER
The Statue of Liberty was a gift from the people of France to the United States. It was designed by Frédéric Bartholdi and was dedicated in 1886. If you take a boat ride down the Seine in Paris you will probably see a one-third replica of Lady Liberty standing on a small island in the river, looking quite magnificent. That copy was given to the people of Paris by the city’s American community in 1889.

4. River to the Seine : OISE
The River Oise rises in Belgium and joins up with the River Seine just outside Paris.

5. Units of nautical speed : KNOTS
A knot (kt.) is a unit of speed equal to one nautical mile per hour. Traditionally a vessel’s speed was determined by using a “chip log”. A chip log is made up of a wooden board attached to a line wrapped around a reel. The line (called a “log-line”) had knots tied in it at uniform spacings. To determine the vessels speed the board was thrown overboard and the line allowed to unroll. The speed was then the “number of knots” paid out in a fixed time interval.

6. Contact lens brand : ACUVUE
Acuvue is a line of disposable contact lenses made by Vistakon, a subsidiary of Johnson & Johnson.

10. Three-line verse : HAIKU
A haiku is a very elegant form of Japanese verse. When writing a haiku in English we tend to impose the rule that the verse must contain 17 syllables. This restriction comes from the rule in Japanese that the verse must contain 17 sound units called “moras”, but moras and syllables aren’t the same thing. What the difference is though, is not so clear to me. Here’s an example of a Haiku:

25. One chased in a car chase, for short : PERP
Perpetrator (perp.)

John Boehner has been Leader of the House of Representatives since 2011, and was the House Minority Leader from 2007 to 2011. Boehner is from Reading, Ohio and grew up in modest circumstances in a two-bedroom house with eleven siblings. After Boehner graduated from university in 1977, he joined a small packaging and plastics business. By the time he resigned to serve in Congress, Boehner had risen to become president of the company.

29. Use a pogo stick : HOP
What we know today as a pogo stick was invented in Germany by Max Pohlig and Ernst Gottschall. The name “pogo” comes from the first two letters in each of the inventors’ family names: Po-hlig and Go-ttschall.

36. Where a Brownie’s merit badges are attached : SASH
Brownies are a members of the Girl Guiding organization who are seven to ten years old. When the group was founded in 1914 by Lord Baden-Powell, they were known as Rosebuds. That name wasn’t popular with the membership and so was changed, taking inspiration from an 1870 story by Juliana Horatia Ewing called “The Brownies”.

37. Language of Pakistan : URDU
Urdu is one of the two official languages of Pakistan (the other being English), and is one of 22 scheduled languages in India. Urdu partly developed from Persian and is written from right to left.

39. “___ the land of the free …” : O’ER
The words “o’er the land of the free” come from “The Star Spangled Banner” written by Francis Scott Key. The lyrics were written first as a poem by Key, inspired by witnessing the bombardment by the British of the American forces at Fort McHenry during the Battle of Baltimore in September 1814. The words were then set to the tune of a popular British drinking song penned by John Stafford Smith called “The Anacreontic Song”, with the Anacreontic Society being a men’s club in London.

48. Eye part subject to degeneration : MACULA
The macula is a pigmented area near the center of the retina. The macula has a high density of cone cells, and so plays a role is high acuity vision.

51. Hors d’oeuvres toppings : PATES
Pâté is a rich spreadable paste made up of a mixture of ground meat and fat, to which various vegetables, herbs and spices may be added. The most famous version of the paste is pâté de foie gras, made from the fattened livers of geese (“foie gras” means “fat liver” in French).

56. Modern cab service alternative : UBER
Uber is a ridesharing service that was founded in 2009 and is based in San Francisco. The service is somewhat controversial and has been described as an illegal taxicab operation. Central to Uber’s service is the company’s mobile app, which can use the client’s GPS location to help find the nearest available ride.

57. Asian food additive : MSG
Monosodium glutamate (MSG) is the sodium salt of a naturally-occurring,non-essential amino acid called glutamic acid. It is used widely as a flavor enhancer, particularly in many Asian cuisines. Whether or not it is harmful seems to be still under debate. I say that something produced in a test tube shouldn’t be in our food …

60. Kwanzaa time: Abbr. : DEC
Kwanzaa is a celebration of African heritage that lasts from December 26 to January first annually. The holiday was introduced in 1966 as an alternative to the existing holidays at the end of the year. The name comes from the Swahili phrase “matunda ya kwanza”, meaning “first fruits of the harvest”. Part of the tradition is to light candles in a kinara.