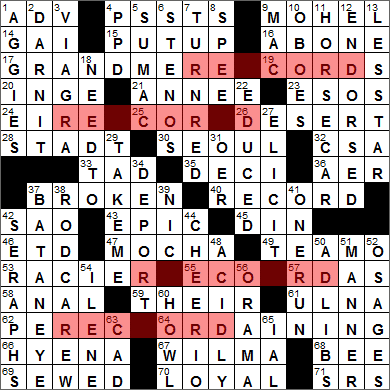 9. Bris officiant : MOHEL
A mohel is a man who has been trained in the practice of brit milah (circumcision). Brit milah is known as “bris” in Yiddish. The brit milah ceremony is performed on male infants when they are 8-days old.

19. Parachute parts : CORDS
The term “parachute” was coined by Frenchman François Blanchard, from “para-” meaning “defence against” and “chute” meaning “a fall”.

20. Playwright who wrote “What is originality? Undetected plagiarism” : INGE
Playwright William Inge had a run of success on Broadway in the early fifties. Inge’s most celebrated work of that time was the play “Picnic”, for which he was awarded a Pulitzer Prize. The original 1953 cast of “Picnic” included a young male actor making his debut on Broadway. His name was Paul Newman. Many of Inge’s works are set in the American heartland and so he became known as the “Playwright of the Midwest”.

24. Geographical name that’s another geographical name backward : EIRE
“Éire”, is the Irish word for “Ireland”. “Erin” is an anglicized version of “Éire” and actually corresponds to “Éirinn”, the dative case of “Éire”.

Erie is a city in the very north of Pennsylvania, right on the southern shore of Lake Erie. The city takes its name from the Erie Native American tribe that resided in the area.

25. One of two N.T. books : COR
The seventh and eighth books of the New Testament are the First and Second Epistles to the Corinthians.

32. Civil War inits. : CSA
The Confederate States of America (CSA) set up government in 1861 just before Abraham Lincoln took office. Jefferson Davis was selected as President of the CSA at its formation and retained the post for the life of the government.

33. Wee bit : TAD
Back in the 1800s “tad” was used to describe a young child, and this morphed into our usage of “small amount” in the early 1900s. The original use of “tad” for a child is very likely a shortened version of “tadpole”.

36. ___ Lingus : AER
Aer Lingus is my favorite airline! Well, the service isn’t that great, but when I get on board an Aer Lingus plane I feel like I am back in Ireland. Aer Lingus is the national airline of Ireland, with “Aer Lingus” being a phonetic spelling of the Irish “aer-loingeas” meaning “air fleet”. These days Aer Lingus can only lay claim to the title of Ireland’s oldest airline as it is no longer the biggest. That honor goes to the controversial budget airline called Ryanair.

37. With 40-Across, repeat offender? … or something found, literally, in four rows in this puzzle : BROKEN
40. See 37-Across : RECORD
Someone or something that is annoying, repeatedly, might be described as a “broken record”. In other words, behaves like a vinyl record with scratch in it.

42. ___ Paulo : SAO
São Paulo is the largest city in Brazil. São Paulo is also the city with the highest number of helicopters in the world. This is partly driven by the horrendous traffic jams in São Paulo, but also by the wealthy having a very real fear of being kidnapped on the city’s streets.

47. Shade of brown : MOCHA
Mocha is a port city in Yemen on the Red Sea and was once the principal port for the capital city of Sana’a. Mocha was the major marketplace in the world for coffee until the 1600s, and gave its name to the Mocha coffee bean, which in turn gave it’s name to the mocha brown color.

49. Mexican cigar brand : TE-AMO
The Te-Amo brand of cigars have been made in the San Andres Valley in the state of Veracruz, Mexico since 1963.

57. Vitamin amts. : RDAS
Recommended Daily Allowances (RDAs) were introduced during WWII and are a set of recommendations for the standard daily allowances of specific nutrients. RDAs were effectively absorbed into a broader set of dietary guidelines in 1997 called Recommended Daily Intakes (RDIs). RDIs are used to determine the Daily Values (DV) of foods that are printed on nutrition fact labels on most food that we purchase.

61. Bone near the funny bone : ULNA
The ulnar nerve runs alongside the ulna (one of the bones in the lower arm). The ulnar nerve is the largest unprotected (not surrounded by muscle or bone) nerve in the human body. The nerve can be touched under the skin at the outside of the elbow. Striking the nerve at this point causes and an electric-type shock, known as hitting one’s “funny bone” or “crazy bone”.

66. Serengeti scavenger : HYENA
The spotted hyena of Sub-Saharan Africa is also known as the laughing hyena because of the sound it oftens makes, which resembles maniacal laughter.

The Serengeti is a region in Africa, located in northern Tanzania and southwest Kenya. The name “Serengeti” comes from the Maasai language and means “Endless Plains”.

67. Name hollered in the “Flintstones” theme song : WILMA
The theme song for the cartoon show “The Flintstones” was found to be the most recognizable children’s TV theme amongst adults in a survey carried out in 2010. The theme is titled “Meet the Flintstones”. By the way, the themes songs for “Top Cat” and “Postman Pat” came in second and third in the survey.

68. See 69-Across : BEE
69. Participated in a 68-Across : SEWED
Back in 18th-century America, when neighbors would gather to work for the benefit of one of their group, such a meeting was called a “bee”. The name “bee” was an allusion to the social nature of the insect. In modern parlance, a further element of entertainment and pleasure has been introduced, for example in a “quilting bee”, or even a “spelling bee”.

Down
1. Texas A&M team : AGGIES
Texas A&M is the seventh largest university in the country, and was the first public higher education institute in the state when it accepted its first students in 1876. The full name of the school was the Agricultural and Mechanical College of Texas and its primary mission used to be the education of males in the techniques of farming and military warfare. That’s quite a combination! Because of the agricultural connection, the college’s sports teams use the moniker “Aggies”.

3. Product touted by Hugh Hefner : VIAGRA
Viagra is a trade name for the drug sildenafil citrate that is used primarily to treat erectile dysfunction. The drug was developed in the UK by Pfizer as a treatment for high blood pressure and angina, but the clinical trials showed that it induced penile erections. A decision was made to change the intended market of the drug and in 1998 it became the first orally-taken medication approved by the FDA for erectile dysfunction.

Hugh Hefner is from Chicago. His first publishing job was in the military, where he worked as a writer for a US Army newspaper from 1944-46. He went to college after his military service and then worked as a copywriter for “Esquire” magazine. He left “Esquire” to found his own publication that he called “Playboy”, which first hit the newsstands in 1953. “Playboy” has been around ever since.

6. They tend to be fast typists : STENOS
Stenography is the process of writing in shorthand. The term comes from the Greek “steno” (narrow) and “graphe” (writing).

8. Graf ___ (ill-fated German cruiser) : SPEE
Maximilian Graf von Spee was actually born in Denmark, but of a noble German family. By the time WWI started, Spee had risen to the rank of Rear Admiral in the German Navy. He was killed in the Battle of the Falkland Islands (the original 1914 version!). He gave his name to the powerful pocket battleship, the Admiral Graf Spee, which was damaged in the Battle of the River Plate during WWII. The Graf Spee took refuge in the neutral port of Montevideo and when the boat was expelled by the government of Uruguay, the captain scuttled her rather than face the Allied flotilla waiting for her just outside the port.

13. Cigarette ad claim : LESS TAR
The partially combusted particulate matter, produced as a cigarette burns, forms a resinous material called “tar”. Cigarette tar is different than the tar used on roads, but is very toxic. Marijuana smoke produces a very similar tar to cigarette smoke, and is just as dangerous.

29. Start to a baseball song : TAKE ME …
“Take Me Out to the Ball Game” is a 1908 song that is traditionally sung during the seventh inning stretch of a baseball game. Even though the song has is now inextricably linked to baseball, neither of the two composers had ever been to a game before they wrote it.

31. “The Star-Spangled Banner” preposition : O’ER
The words “o’er the land of the free” come from “The Star Spangled Banner” written by Francis Scott Key. The lyrics were written first as a poem by Key, inspired by witnessing the bombardment by the British of the American forces at Fort McHenry during the Battle of Baltimore in September 1814. The words were then set to the tune of a popular British drinking song penned by John Stafford Smith called “The Anacreontic Song”, with the Anacreontic Society being a men’s club in London.

38. Baseball Hall-of-Famer mistakenly listed in “The Chanukah Song” as a Jew : ROD CAREW
Rod Carew is a former Major League Baseball player from Panama. Actually. Carew is a “Zonian”, meaning that he was born in the Panama Canal Zone, a political entity that existed for decades from 1903.

“The Chanukah Song” is a novelty song that was first performed by Adam Sandler on “Saturday Night Live” in 1994. In the lyrics, Sandler cites a list of Jewish celebrities in an attempt to comfort Jewish children who feel alienated at Christmas. One of the “Jewish” celebrities listed is former MLB baseball player Rod Carew, who Sandler says “converted” to Judaism. However, this is a mistake. Carew married a Jewish woman but did not convert.

39. Actor Cage, informally : NIC
Nic Cage was born Nicolas Coppola. Cage is the nephew of director Francis Ford Coppola and actress Talia Shire, both of whom are his father’s siblings.

42. High-ranking angels : SERAPHS
A seraph is a celestial being found in Hebrew and Christian writings. The word “seraph” (plural “seraphim”) literally translates as “burning one”.

50. Does improv : AD LIBS
“Ad libitum” is a Latin phrase meaning “at one’s pleasure”. In common usage the phrase is usually shortened to “ad lib”. On the stage the concept of an “ad lib” is very familiar. For example, an actor may substitute his or her own words for forgotten lines using an ad lib, or a director may instruct an actor to use his or her own words at a particular point in a performance to promote a sense of spontaneity.

52. Plains Indians : OSAGES
The Osage Nation originated in the Ohio River valley in what we now call Kentucky. They were forced to migrate west of the Mississippi by the invading Iroquois tribe. Most of the tribe members now live in Osage County, Oklahoma.

54. Chaiken who co-created “The L Word” : ILENE
Ilene Chaiken was the executive producer for the Showtime drama series “The L Word”. The show deals with lesbian, bisexual and transgender people living in West Hollywood. The title refers to “the L word”: lesbian.

56. Slangy commercial suffix : -ORAMA
The “-orama” is used in advertising and journalism to create words meaning a space or spectacle related to the root word. Examples are “Scoutorama” and “smellorama”. The suffix is a derived from words like “panorama” and “diorama”.

63. No great catch : CAD
Our word “cad”, meaning “a person lacking in finer feelings”, is a shortening of the word “cadet”. “Cad” was first used for a servant, and then students at British universities used “cad” as a term for a boy from the local town. “Cad” took on its current meaning in the 1830s.