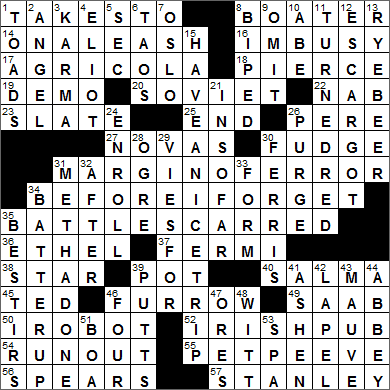 18. Signer of the Kansas-Nebraska Act : PIERCE
Franklin Pierce was the only US President from the State of New Hampshire. Pierce was by all accounts a tragic figure. Even though he was from the north of the country, he had sympathies for the causes of the South. After he left office, he formally declared support for the Confederacy during the Civil War, which completely destroyed his reputation in the North. Pierce’s marriage fell apart, and he died in 1869 from cirrhosis of the liver after having struggled with alcoholism for much of his life.

27. Compact Chevys of old : NOVAS
The Chevrolet Nova was produced by General Motors from 1962 to 1979, and from 1985 to 1988. We owned one of those 1985-1988 Novas. Those latter models were actually Toyota Sprinters that were assembled just down the road here in Fremont, California in a GM/Toyota joint venture.

36. One of the Kennedys : ETHEL
Ethel Kennedy is the widow of Robert F. Kennedy. Ethel was a roommate with Jean Kennedy, and through Jean met her brother Robert. Robert and Ethel had ten children together, with an eleventh child sadly arriving after Robert’s assassination in 1968.

37. Manhattan Project scientist : FERMI
The physicist Enrico Fermi was born in Rome, Italy. Fermi moved to the US just before WWII, largely to escape the anti-Semitic feelings that were developing in Italy under Mussolini. It was Fermi’s work at the University of Chicago that led to the construction of the world’s first nuclear reactor. Fermi died at 53 years of age from stomach cancer. Cancer was a prevalent cause of death among the team working on that first nuclear pile. The synthetic element Fermium was discovered in 1952 and is named in his honor.

The Manhattan project was of course the joint US-Canada-UK project to develop an atomic bomb during WWII. Initially, the Army headquarters for the program was located on the 18th floor of a building on Broadway in New York City. Eventually, because of that first location, the project adopted the name “Manhattan”.

38. Emblem on Captain America’s shield : STAR
Captain America is a fictional superhero in comics published by Marvel Comics. He is the alter ego of a physically weak man called Steve Rogers who was given an experimental serum by the US Government during WWII.

39. All you can take with one hand : POT
The “pot” in a card game has been referred to as the kitty since the 1880s. It’s not certain how the name “kitty” evolved but possibly it came from “kit”, the necessary equipment for the game.

40. “Frida” actress Hayek : SALMA
Salma Hayek is a Mexican actress. Hayek was the first Mexican national to be nominated for a Best Actress Oscar, for her portrayal of artist Frida Kahlo in the 2002 movie “Frida”.

45. Williams nicknamed “The Kid” : TED
As well as playing in left field for the Boston Red Sox, Ted Williams served as a pilot in the Marine Corps in World War II and the Korean War.

49. Automaker that introduced heated front seats : SAAB
SAAB stands for Svenska Aeroplan AB, which translates into English as Swedish Aeroplane Limited. SAAB was, and still is, mainly an aircraft manufacturer. If you take small hops in Europe you might find yourself on a SAAB passenger plane. The SAAB automobile division was acquired by General Motors in the year 2000, who then sold it to a Dutch concern in 2010. However, SAAB (automotive) finally went bankrupt in 2011.

50. 1950 short-story collection by Asimov : I, ROBOT
Isaac Asimov was a wonderful science fiction writer, and a professor of biochemistry. He was a favorite author as I was growing up and I must admit that some hero worship on my part led me to study and work as a biochemist for a short while early in my career. My favorite of his works is the collection of short stories called “I, Robot”, although Asimov’s most famous work is probably his “Foundation” trilogy of novels.

County Cork in is in the southwest of Ireland, and takes its name from Cork, the country’s “second city”. County Cork has many claims to fame. For example, it is home to Cobh, the port where many emigrants set off to the US, Canada and Australia. Nearby is the Royal Cork Yacht Club in Crosshaven, the oldest yacht club in the world (founded in 1720). And Cobh was the last port of call for the Titanic on its fateful crossing of the Atlantic.

56. Phalanx weapons : SPEARS
In ancient warfare, a phalanx was a group of soldiers that stood or marched together as a unit using their shields as an outer barrier around the formation. “Phalanx” (plural “phalanges”) is the Greek word for “finger”. “Phalanx” was used for the military formation probably because of the finger-like movements that such formations made on the field of battle.

57. “Through the Dark Continent” author, 1878 : STANLEY
Sir Henry Morton Stanley was a journalist and explorer from Wales. Stanley was commissioned by the “New York Herald” to search for the missionary and explorer David Livingstone in 1869, who was known to be in Africa but had not been heard from in some time. Stanley pulled together an enormous expedition to take on the task in 1871. After a brutal eight months trek through the jungle, he finally met up with Livingstone near Lake Tanganyika in modern-day Zanzibar. Supposedly, Stanley greeted his quarry with the famous words, “Doctor Livingstone, I presume?”

Down
3. Cosmic payback : KARMA
Karma is religious concept with its basis in Indian faiths. Karma embraces the notion of cause and effect. Good deeds have good consequences at some later point in one’s life, future life, or afterlife and vice versa.

4. “I have measured out my life with coffee spoons” writer : ELIOT
T. S. Eliot was born in New England but grew up in St. Louis, Missouri. Much of Eliot’s college education was at Oxford, and clearly he became comfortable with life in England. In 1927 he became a British citizen and lived the rest of life in the UK.

“I have measured out my life with coffee spoons” is a line from T.S. Eliot’s poem “The Love Song of J. Alfred Prufrock”.

“The Lovesong of J. Alfred Prufrock” is a very famous poem by T. S. Eliot, first published in 1915. The rather odd name of “Prufrock” seems to have just come to Eliot, although there was a Prufrock-Littau Company in St. Louis when he lived there.

6. Stop along the Santa Fe trail : TAOS
The city of Taos, New Mexico is named for the Native American village nearby called Taos Pueblo. Taos is famous for its art colony. Artists began to settle in Taos in 1899, and the Taos Society of Artists was founded in 1915.

The Santa Fe Trail connected Franklin, Missouri in the east to Santa Fe, New Mexico in the west. It was an oft-travelled route for much of the 1800s before the advent of the railroad in 1880.

7. Four-time host of the Nordic World Ski Championships : OSLO
Oslo is the capital of Norway. The city of Oslo burns trash to fuel half of its buildings, including all of its schools. The problem faced by the city is that it doesn’t generate enough trash. So, Oslo imports trash from Sweden, England and Ireland, and is now looking to import some American trash too.

10. Bart and Lisa’s grandpa : ABE
In the animated TV show called “The Simpsons”, Grampa Abe Simpson is voiced by Dan Castellaneta, the same actor who provides the voice for Homer.

12. Not-so-fast food? : ESCARGOT
“Escargot” is the French word for “snail”. In order to eat snails, apparently they have to be “purged” before killing them. That means starving them or feeding them on something “wholesome” for several days before cooking them up. Ugh …

13. Amber-colored brew : RYE BEER
Rye beer is a beer in which some or all of the barley malt is replaced by malted rye.

28. Creature outwitted by Hop-o’-My-Thumb : OGRE
“Hop-o’-My-Thumb” is a fairy tale from France. The story is also called “Little Thumbling” and tells of a small boy going up against an ogre.

30. Columbian Exposition engineer : FERRIS
The first Ferris Wheel was built for the Chicago World’s Fair (officially known as the “World’s Columbian Exposition”) in 1893. That wheel was designed and constructed by George Washington Gale Ferris, Jr. who lent his name to wheels built from then on.

Back at the 1893 World’s Columbian Exposition held in Chicago there were rides and amusements that were all concentrated in one place, away from the exhibition halls. The rides included the world’s first Ferris wheel, and one could also see Buffalo Bill Cody’s Wild West show. All these attractions were located in the mile-long linear park on the South Side of Chicago known as Midway Plaisance. Ever since then, the attractions at any fair have been located at “the midway”.

31. Addictive analgesic : METHADONE
Methadone is a synthetic drug used as a painkiller and as an anti-addictive drug used in the treatment of addiction to opiates. Methadone was developed in Germany just prior to WWII, driven by a shortage of opiates needed for the military.

43. “Never trust a woman who wears ___” (line from “The Picture of Dorian Gray”) : MAUVE
The complete quotation is:

Never trust a woman who wears mauve, whatever her age may be, or a woman over thirty-five who is fond of pink ribbons.

“The Picture of Dorian Gray” is a novel by Oscar Wilde, in fact Wilde’s only novel. In the story, the title character is a young man appearing in a painting. Jokingly, Dorian sells his soul to the devil so that the painting would age rather than he.

48. Olympic skater Katarina : WITT
Katarina Witt is a retired figure skater who represented her homeland of East Germany, winning Olympic golds in 1984 and 1988. After the reunification of Germany, Witt gained access to the files held on her by the East German secret police. Her file contained 3,000 pages of information about her life since she was eight years old.

51. Burlesque accessory : BOA
“Burlesque” came into English from French, although the word is rooted in the Italian “burla”, the word for a joke, or mockery. A burlesque is work of literature, drama or music that is intended to amuse and cause laughter. Burlesques in the US took on a variety show format and were popular in the US from the 1860s. Over time, the variety acts started to include female striptease, and the term “burlesque” has come to be mainly associated with such entertainment. The derivative verb “to burlesque” means “to imitate mockingly”.

53. Body treatment facility : SPA
The word “spa” migrated into English from Belgium, as Spa is the name of a municipality in the east of the country that is famous for its healing hot springs. The name “Spa” comes from the Walloon word “espa” meaning “spring, fountain”.