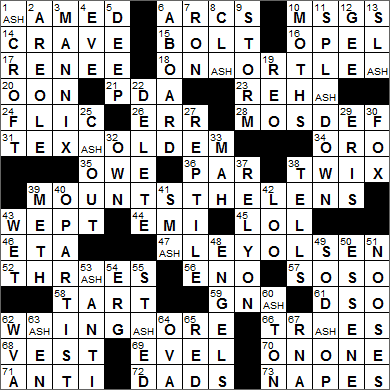 CROSSWORD SETTER: Luke Vaughn
THEME: Ash Everywhere … we have a rebus puzzle today, with the letters ASH in eleven squares. These eleven occurrences of ASH correspond to the ASH from MOUNT ST HELENS that landed in eleven states in 1980:

14. Jones for : CRAVE
The slang term “Jones” is used to mean an intense addiction, a yen, and probably arose in the late sixties out of the prior use of “Jones” for the drug heroin.

15. Aptly named Olympics star : BOLT
Usain Bolt is a Jamaican sprinter who won the 100m and 200m race gold medals in both the 2008 and 2012 Olympic Games. Back in Jamaica, Bolt was really into cricket and probably would have been a very successful fast bowler had he not hit the track instead.

16. Maker of the Insignia : OPEL
The Insignia is a car made by the German automaker Opel, since 2008. The Insignia is rebranded for the North American market as the Buick Regal, a model name that had been used by GM for US-produced cars from 1973 to 2004.

17. Woman’s name with an accent : RENEE
The names “René” and “Renée” are French for the adjective “reborn”, when applied to masculine and feminine nouns.

20. Suffix with bass : -OON
Our modern bassoon first appeared in the 1800s and has had a place in the concert orchestra ever since.

28. Half of hip-hop’s Black Star : MOS DEF
Mos Def is the former stage name of actor and rapper Dante Terrell Smith-Bay, now known as Yasiin Bey. Mos Def is one of the few rap stars who is really making a name for himself in the world of movies. He received critical acclaim for roles in 2003’s “The Italian Job” , 2005’s “The Hitchhiker’s Guide to the Galaxy”, and for a featured role in an episode of television’s “House”.

Black Star is a hip hop duo composed of rappers Yasiin Bey (formerly known as Mos Def) and Talib Kweli. The pair got together in Brooklyn, New York in 1997.

31. Game in 2006’s “Casino Royale” : TEXAS HOLD ‘EM
The official birthplace of the incredibly popular poker game of Texas Hold ‘Em is Robstown, Texas where the game dates back to the early 1900s. The game was introduced into Las Vegas in 1967 by a group of Texan enthusiasts including Doyle Brunson, a champion often seen playing on TV today. Doyle Brunson published a poker strategy guide in 1978, and this really helped increase the popularity of the game. But it was the inclusion of Texas Hold ‘Em in the television line-up that really gave the game its explosive surge in popularity, with the size of the prize money just skyrocketing.

2006’s “Casino Royale” is the 21st film in the “James Bond” series, and the first to star Daniel Craig in the lead role. The film was directed by New Zealander Martin Campbell, someone who my next door neighbor for a couple of years (my claim to fame!). Campbell also directed “GoldenEye” in 1995, which introduced Pierce Brosnan as James Bond. I find it interesting that Campbell was asked back to oversee the introduction of Daniel Craig to the role.

“The Treasure of the Sierra Madre” is a 1927 novel by German novelist B. Traven. The book was made into a famous 1948 movie of the same name by John Huston, starring Humphrey Bogart and Walter Huston (director John’s father).

38. “Two for me. None for you” candy : TWIX
I remember Twix bars from way back in 1967 when they were introduced in the British Isles. Twix bars made it to the US over a decade later, in 1979.

39. It left parts of itself in 11 states in 1980 : MOUNT ST HELENS
Only two volcanoes in the Cascade Range in the northwest have erupted in the 20th century: Mount St. Helens in 1980 and Mount Lassen in 1915. The last significant eruption of Mount Shasta, a third volcano in the Cascades, was about 200 years ago. The 1980 eruption of Mount St. Helens resulted in ash being deposited in eleven US states and 5 Canadian provinces.

44. One of the music industry’s former Big Four : EMI
The Big Four recording labels were (until EMI was broken up in 2012 and absorbed by what became “the Big Three”):

47. “It Takes Two” co-star : ASHLEY OLSEN
I don’t know anything about the Olsen twins, but I am told that folks believe Mary-Kate and Ashley to be identical twins. They look very much alike, but are in fact just fraternal twins.

“It Takes Two” is a 1995 film with a storyline that’s a little like that in the 1961 movie “The Parent Trap”. It’s about two young girls who look remarkably alike, played by the Olsen twins, who work together to get an older man and woman to marry.

61. Brit. military decoration : DSO
The Distinguished Service Order (DSO) is a British military award that is usually presented to officers with the rank of Major or higher.

68. Three-piece piece : VEST
Here’s another word that often catches me out. What we call a “vest” in the US is a waistcoat back in Ireland. And the Irish use the word “vest” for an undershirt.

69. First name in long jumping : EVEL
Daredevil Evel Knievel contracted hepatitis C from the many blood transfusions that he needed after injuries incurred during stunts. He had to have a liver transplant as a result, but his health declined after that. He eventually passed away in 2007.

Down
1. Early 2000s attorney general : ASHCROFT
John Ashcroft served as US Attorney General in the administration of President George W. Bush. Ashcroft is quite the musician. When he was a member of the US Senate (representing the state of Missouri) Ashcroft formed a barbershop quartet along with three of his colleagues that was called the Singing Senators.

3. Detective of 1960s-’70s TV : MANNIX
“Mannix” is a TV detective show that originally ran from 1967 to 1975. The title character is a private investigator called Joe Mannix, played by Mike Connors. “Mannix” was a Desilu production, made by the company owned by Desi Arnaz and Lucille Ball. As a result, Connors once appeared in an episode of “Here’s Lucy” called “Lucy and Mannix are Held Hostage”.

4. Female rapper with the 2002 hit “Gangsta Lovin'” : EVE
Eve is the stage name of female rapper Eve Jeffers-Cooper from Philadelphia. Eve has her own television sitcom on the UPN network called “Eve”.

9. Attack en masse : STORM
“En masse” is a French term, which is best translated as “as a group”.

10. Ones woolgathering? : MOTHS
The larvae of several types of moth are noted for eating fabrics made from natural fibers such as wool or cotton. Many people store woolens in cedar chests believing that the scent of the wood prevents a moth infestation. In fact, the only known effective repellent is the naphthalene found in mothballs, which might be a health concern for humans. One way to kill moth larvae in fabric is to freeze the garment for several days at a temperature below 8 degrees centigrade.

11. Landing for many an Apollo mission : SPLASHDOWN
The Apollo program is very much associated with President Kennedy, as he gave NASA the challenge to land men on the moon by the end of the sixties. However, the Apollo program was conceived during the Eisenhower administration as a follow-up to Project Mercury that put the first Americans in space.

19. U.S. truck maker until the early ’50s : REO
The REO Motor Company was founded by Ransom E. Olds (hence the name REO). The company made cars, trucks and buses, and was in business from 1905 to 1975 in Lansing, Michigan. Among the company’s most famous models were the REO Royale and the REO Flying Cloud.

25. Leave the casino, say : CASH OUT
The “casino” originated in the 1700s, first describing a public room for music or dancing. The name “casino” is a diminutive of “casa” meaning “house”.

29. Dwarf planet beyond Pluto : ERIS
Eris is the largest known dwarf planet in our solar system. It is also the ninth largest body orbiting the sun, a fact that helped relegate Pluto (the tenth largest body) from its status of planet in 2006. Eris was discovered in 2005.

33. Start of a tile game : MAH
“Mahjong” (also mahjongg and mah-jongg) is the Chinese word for “sparrow”. Mahjong is a game that originated in China, and is usually played by four players. There is a myth that the game was developed by the Chinese philosopher, Confucius. The myth also suggests that Confucius was fond of birds, and hence chose the name “sparrow”.

39. Kind of lab : METH
“Meth” is a street name used for the drug methamphetamine, also called “crank” and “crystal meth”.

42. Throne room at Buckingham Palace : LOO
When I was growing up in Ireland, a “bathroom” was a room that had a bath and no toilet. The separate room with the commode was called “the toilet” or sometimes the W.C. (the water closet). Apparently the term closet was used because in the 1800s when homeowners started installing toilets indoors they often displaced clothes and linens in a “closet”, as a closet was the right size to take the commode. It has been suggested that the British term “loo” comes from Waterloo (water-closet … water-loo), but no one seems to know for sure. Another suggestion is that the term comes from the card game of “lanterloo” in which the pot was called the loo!

Buckingham Palace is a stately home that, since the days of Queen Victoria, has been the official residence of the British monarch. Buckingham Palace was originally a large townhouse built for the Duke of Buckingham in 1703, hence the name.

49. Place to get a malted : SODA SHOP
Walgreens claims to have introduced the malted milkshake, in 1922.

50. Early Semite : ESSENE
The Essenes were a Jewish religious group, most noted these days perhaps as the writers of the Dead Sea Scrolls.

The word “Semitic” comes from the Greek for Shem, one of the three sons of Noah. A Semite is one of a large list of peoples, from the Assyrians and Babylonians to the Hebrews. The term “anti-Semite” however, almost always refer to anti-Jewish sentiment.

53. One-named singer with the 2003 hit “Rock Wit U (Awww Baby)” : ASHANTI
Ashanti Douglas is an American R&B singer who uses just “Ashanti” as her stage name.

54. Fraction of a watt-hour : ERG
An erg is a unit of energy or mechanical work. “Erg” comes from the Greek word “ergon” meaning “work”. A dyne is a unit of force. The name “dyne” comes from the Greek “dynamis” meaning “power, force”. Ergs and dynes are related to each other in that one erg is the amount of energy needed to move a force of one dyne over a distance of one centimeter.

60. Olympic decathlon gold medalist ___ Eaton : ASHTON
Ashton Eaton is a decathlete from Portland, Oregon. Eaton is the current world record holder for both the decathlon and heptathlon events.

62. Home of Marshall Univ. : WVA
Marshall University was founded in 1937 and is located in Huntington, West Virginia. The school was named for John Marshall who had served as the fourth Chief Justice of the US and who had died in 1835. Perhaps the saddest event in Marshall’s history was a 1970 crash of a chartered plane that killed everyone on board, including the whole of the Marshall football team and its coaches.

67. Code carrier, sometimes : RNA
Ribonucleic Acid (RNA) is an essential catalyst in the manufacture of proteins in the body. The genetic code in DNA determines the sequence of amino acids that make up each protein. That sequence is read in DNA by messenger RNA, and amino acids are delivered for protein manufacture in the correct sequence by what is called transfer RNA. The amino acids are then formed into proteins by ribosomal RNA.