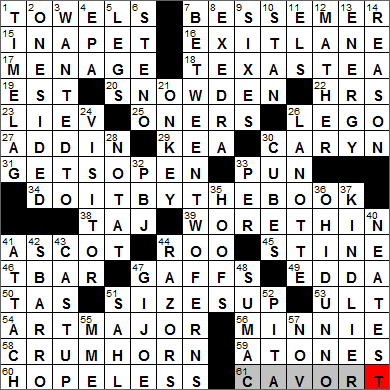 Today’s Wiki-est, Amazonian Googlies
Across
7. Sir Henry ___, pioneer in steelmaking : BESSEMER
Sir Henry Bessemer was an English engineer who came up with the Bessemer process, the first inexpensive process for the mass-production of steel.

17. Household : MENAGE
“Ménage” is the French word for “household”. The familiar term “ménage à trois” translates as “household of three” and is used to describe a domestic arrangement in which three people having sexual relations occupy the same household.

20. Edward who was dubbed “The Dark Prophet” by Time magazine : SNOWDEN
Edward Snowden is a former NSA contractor who leaked several top secret NSA documents to the media beginning in June 2013. After disclosing his name as the source of the leaks, Snowden tried to seek asylum in Ecuador. While travelling to Ecuador he had a layover in Moscow. While in Moscow, the US government revoked his passport, which effectively left him stranded in the transit area of Moscow Airport. The Russian government eventually granted his an annually renewable temporary asylum.

23. Actor/director Schreiber : LIEV
Liev Schreiber is highly regarded as a stage actor, and has many classical roles under his belt. He won a Tony in 2005 for his Broadway performance in “Glengarry Glen Ross”, and earned excellent reviews for his performance in Shakespeare’s “Cymbeline”.

26. 2014’s “The ___ Movie” : LEGO
“The LEGO Movie” is a 2014 computer animated film in which all the characters are Lego figures. Apparently “The Lego Movie” was well received, and there;s already a sequel in the works.

29. Mauna ___ : KEA
Mauna Kea is a dormant volcano on the Big Island of Hawaii, the peak of which is the highest point in the whole state. Mauna Kea is in effect the tip of a gigantic volcano rising up from the seabed. So, the “real” height of the volcano (ignoring the ocean) is over 33,000 feet, which is significantly “taller” than even Mount Everest, which has an elevation of 29,029 feet above sea level.

33. Feature of many a Duchamp work : PUN
Marcel Duchamp was a French artist whose works are associated with the Dadaist and Surrealist movements. One of his most celebrated “works” is simply what he called “readymade” art, a urinal which he titled “Fountain”. Even though this work is considered to be “a major landmark in 20th century art”, the original that was submitted for exhibition was never actually displayed and had been lost forever. Replicas were commissioned by Duchamp, and are on display in many museums around the world. I have no further comment …

41. Formal dress option : ASCOT
An Ascot tie is that horrible-looking (I think!) wide tie that narrows at the neck, which these days is only really worn at weddings. The tie takes its name from the Royal Ascot horse race at which punters still turn up in formal wear at Ascot Racecourse in England.

44. Bush beast, briefly : ROO
The name “kangaroo” comes from the Australian Aborigine term for the animal. There’s an oft-quoted story that James Cook (later Captain Cook) asked a local native the name of this remarkable looking animal, and the native responded with “kangaroo”. The story is that the native was actually saying “I don’t understand you”, but as cute as that tale is, it’s just an urban myth.

45. “A Midsummer Night’s Scream” author : STINE
The author R. L. Stine is sometimes referred to as the Stephen King of children’s literature as he writes horror stories for young people.

46. What can help you toward a peak performance? : T-BAR
A T-bar is a type of ski lift in which the skiers are pulled up the hill in pairs, with each pair standing (not sitting!) either side of T-shaped metal bar. The bar is placed behind the thighs, pulling along the skiers as they remain standing on their skis (hopefully!). There’s also a J-bar, a similar device, but with each J-shaped bar used by one skier at a time.

47. Barbed spears for fishing : GAFFS
A gaff is that dangerous-looking metal hook on the end of a pole that fishermen use to drag large fish into their boats.

49. Classic work in Old Norse : EDDA
The Poetic Edda and Prose Edda are two ancient works that are the source for much of Norse mythology. Both Eddas were written in the 13th century, in Iceland.

56. ___ Mouse : MINNIE
Minnie and Mickey were both introduced to the world in 1928. Minnie was originally known as Minerva, and sometimes still is.

58. Renaissance woodwind : CRUMHORN
The crumhorn is a woodwind instrument that was very popular during the Renaissance. The name comes from the German “Krumhorn” meaning “bent horn”, which adequately describes the instrument’s shape, somewhat like the letter “J”. As it is a woodwind, the sound is produced by blowing air past a reed, in fact a double-reed in the case of a crumhorn.

Down
1. Skype annoyance : TIME LAG
The main feature of the Skype application is that it allows voice communication to take place over the Internet (aka VoIP). Skype has other features such as video conferencing and instant messaging, but the application made its name from voice communication. Skype was founded by two Scandinavian entrepreneurs and the software necessary was developed by a team of engineers in Estonia. The development project was originally called “Sky peer-to-peer” so the first commercial name for the application was “Skyper”. This had to be shortened to “Skype” because the skyper.com domain name was already in use.

6. Anagram of “notes,” appropriately : STENO
Stenography is the process of writing in shorthand. The term comes from the Greek “steno” (narrow) and “graphe” (writing).

7. Funny or Die web series hosted by Zach Galifianakis : BETWEEN TWO FERNS
“Between Two Ferns with Zach Galifianakis” is a comedy show that airs over the Internet, and has done so since it was introduced in 2008. In each show, Galifianakis interviews a celebrity, with the guest sitting between two potted ferns. The list of VIPs who have appeared between the ferns includes Natalie Portman, Ben Stiller, Justin Bieber and even President Barack Obama.

10. Pollster Greenberg : STAN
Stan Greenberg is a pollster and strategist who supports several Democratic politicians in the US, as well some high-profile figures in other countries. Most notably, Greenberg advised the campaigns of Bill Clinton, Al Gore and John Kerry, as well as former Chancellor of Germany Gerhard Schroeder and former British Prime Minister Tony Blair.

13. Cabinet department : ENERGY
The US Department of Energy (DOE) came into being largely as a result of the 1973 oil crisis. The DOE was founded in 1977 by the Carter administration. The DOE’s list of responsibilities includes the regulation of the production of nuclear power, and responsibility for the nation’s nuclear weapons.

14. “The natural organ of truth”: C. S. Lewis : REASON
Irishman C. S. Lewis moved to Britain after serving in the British Army in WWI. A man of many achievements, he is perhaps today best remembered for his series of novels for children called “The Chronicles of Narnia” (which includes “The Lion, the Witch and the Wardrobe”). He also wrote the “The Four Loves”, a non-fiction work exploring the nature of love from a Christian perspective.

35. Dances onstage : HOOFS
The slang term “to hoof” means “to dance”, especially as a professional.

42. Pizza chain since 1956 : SBARRO
The Sbarro chain of pizza restaurants was founded by Italian immigrants, Gennaro and Carmela Sbarro.

44. Some T.S.A. confiscations : RAZORS
The Transportation Security Administration (TSA) was of course created in 2001, soon after the 9/11 attacks.

47. Enemy of Cobra : GI JOE
G.I. Joe was the original “action figure”, the first toy to carry that description. G.I. Joe first hit the shelves in 1964. There have been a few movies based on the G.I. Joe figure, but, more famous than all of them I would say is the 1997 movie “G.I. Jane” starring Demi Moore in the title role. I think this movie had some potential, to be honest, but it really did not deliver in the end.

51. Comic Mort : SAHL
Mort Sahl is a Canadian-born actor and comedian who moved to the US with his family when he was a child. Sahl became friends with John F. Kennedy. When Kennedy became president, Sahl wrote a lot of jokes for the President’s speeches, although he also told a lot of Kennedy jokes in his acts. After the President was assassinated in 1963, Sahl was intensely interested in finding out who was behind the crime and even got himself deputized as a member of one of the investigating teams. He was very outspoken against the results of the Warren Commission report on the assassination, and soon found himself out of favor with the public. It took a few years for him to make his comeback, but come back he did.

52. Kind of bread : PITA
Pita is a lovely bread in Middle-Eastern and Mediterranean cuisines. Pita is usually round, and has a “pocket” in the center. The pocket is created by steam that puffs up the dough during cooking leaving a void when the bread cools. The pockets were a big hit in the seventies when someone came up with the idea of using them for fillings hence creating pita sandwiches or “pita pockets”.