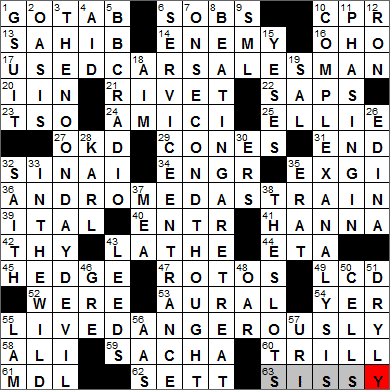 Today’s Wiki-est, Amazonian Googlies
Across
10. One way to get the beat going? : CPR
Cardiopulmonary resuscitation (CPR) has for decades involved the simultaneous compression of the chest to pump blood using the heart, and artificial respiration by blowing air into the lungs. Nowadays emergency services are placing more emphasis on heart compressions, and less on artificial respiration.

13. Master, in Mysore : SAHIB
“Sahib” is most recognized as a term of address in India, where it is used in much the same way as we use “mister” in English. The term was also used to address male Europeans in the days of the British Raj. The correct female form of address is “sahiba”, but in the colonial days the address used was “memsahib”, a melding of “ma’am” and “sahib”

Mysore lies about 100 miles southwest of Bangalore. Tourists flock to Mysore especially during the ten-day Mysore Dasara festival, a draw not only for Indians but foreigners as well.

20. “Am ___ France?”: King Lear : I IN
Shakespeare was inspired to write his famous drama “King Lear” by the legend of “Leir of Britain”, the story of a mythological Celtic king.

23. Chinese dish eponym : TSO
General Tso’s chicken is an American creation, often found on the menu of a Chinese restaurant. The name General Tso may be a reference to General Zuo Zongtang of the Qing Dynasty, but there is no clear link.

31. Living or dead follower : END
The idiom “the living end” means “outrageous” as in “Oh, you are the living end!”

32. Yom Kippur War setting : SINAI
The Yom Kippur War started on October 6 in 1973 with a surprise move by Syria and Egypt into the Sinai Peninsula and the Golan Heights. The conflict quickly escalated into a confrontation between the US and the Soviet Union, as both superpowers rushed arms to the opposing states. Within a week, Israeli forces had regained the land that had been lost and two weeks later had advanced within striking range of both Cairo and Damascus. A UN brokered ceasefire brought the war to an end on October 25, after just 19 days of fighting.

35. Vet : EX-GI
The initials “G.I.” stand for “Government Issue” and not “General Infantry” as is often believed. GI was first used in the military to denote equipment made from Galvanized Iron and during WWI, incoming German shells were nicknamed “GI cans”. Soon after, the term GI came to be associated with “Government Issue” and eventually became an adjective to describe anything associated with the Army.

36. Mutating, highly resistant microbe : ANDROMEDA STRAIN
“The Andromeda Strain” is a 1969 novel by Michael Crichton, a very exciting technical drama about an extraterrestrial organism that threatens the human population. The book was made into quite a successful film that was released in 1971.

40. Start of an intermission? : ENTR’
The term entr’acte comes to us from French, and is the interval between two acts (“entre” deux “actes”) of a theatrical performance. It often describes some entertainment provided during that interval.

Yogi Bear made his debut for Hanna-Barbera in 1958, on the Huckleberry Hound Show before he was given his own series. Do you remember that collar that Yogi wore around his neck? That was a little trick from the animators. By using the collar, for many frames all they had to do was redraw everything from the collar up, saving them lots and lots of time.

42. “___ name I love” (“America” lyric) : THY
The patriotic song “America” is also known by its first line, “My Country, ‘Tis of Thee”. The song was written by Samuel Francis Smith in 1831, and was the de facto national anthem of the country until “The Star-Spangled Banner” was declared the official anthem.

44. Campus letter : ETA
Eta is the seventh letter of the Greek alphabet, and is a forerunner of our Latin character “H”. Originally denoting a consonant, eta was used as a long vowel in Ancient Greek.

47. Old paper parts : ROTOS
“Roto” is a short for “rotogravure”, a photomechanical process used for printing pictures and some typeset matter. By extension, a “roto” was also a section of a paper printed using such a process, particularly a magazine section.

58. He proclaimed “I shook up the world” : ALI
Muhammad Ali fought Sonny Liston for the World Heavyweight Championship twice. The first bout was in 1964 in Miami, and the second in 1965 in Lewiston, Maine. In the first fight, Liston failed to come out of his corner for the seventh round. On seeing this, Ali (or “Cassius Clay” as he was then) ran to the ropes yelling “I’m the greatest!” and “I shook up the world”.

60. Shake in an opera house : TRILL
In music a “trill” is the rapid alternation of two tones that are very close to each other to make a vibrato sound.

Down
1. Test pilot’s protection : G-SUIT
A G-suit is needed when astronauts and aviators are subject to high accelerations. Such acceleration can cause blood to pool in the lower part of the body, reducing the supply to the brain and possibly leading to a blackout. A G-suit is basically a special pair of tight-fitting pants that are fitted with inflatable bladders. The bladders inflate during high accelerations, tightening around the legs and abdomen, reducing the amount of blood pooling.

2. Mecca or Medina : OASIS
Mecca is in the Makkah province of Saudi Arabia and is the holiest city in Islam. Every year several million Muslims perform the Hajj, a holy pilgrimage to Mecca.

Medina is a city in western Saudi Arabia. Medina is the second holiest city in the Islamic tradition after Mecca, as it is the burial place of the Prophet Muhammad.

3. 1985 Ralph McInerny novel : THE NOONDAY DEVIL
Ralph McInerny was an author and Philosophy Professor at Notre Dame. McInerny’s most famous novels are the Father Dowling series of mystery stories.

5. Longtime airer of “Any Questions?” : BBC RADIO
The BBC is my favorite radio service, and one that I listen to everyday. The service began broadcasting back in 1922. Radio is still a major offering of the BBC, even in these days of television. In fact, the weekly magazine that lists all BBC television and radio shows is still known as “Radio Times”.

“Any Questions?” is a popular BBC Radio show that is broadcast weekly. The show first aired in 1948 and features a panel debating political issues of the day. There is also a weekly phone-in “response” show called “Any Answers?”

10. Mathematics branch associated with fractals : COMPLEX ANALYSIS
A fractal is a fascinating geometric shape, one that can be split into parts, each of which is a smaller version (almost identical to) of the larger shape. The name “fractal” comes from the Latin “fractus” meaning “broken” or “fragmented”. Fractals are found all over nature, most notably the shapes created by ice crystals. It can be hard to tell the difference between the shapes of ice as it freezes on glass, viewed with the eye or viewed under a microscope. Fractals can also be seen in clouds, snow flakes, and even cauliflower and broccoli!

12. Jockey Turcotte : RON
The Canadian jockey Ron Turcotte is best known for riding Secretariat, the horse that won the Triple Crown in 1973. Sadly, Turcotte came off his ride in a race at Belmont Park in 1978 and sustained an injury that left him a paraplegic.

18. Biathlon need : AIM
A biathlon is an event requiring expertise in two sporting disciplines. The most common biathlon is the winter sport that combines cross-country skiing with rifle shooting. This traditional biathlon was born out of an exercise for soldiers in Norway.

19. Cádiz condiment : SAL
In Spanish, one might partner set the pepper (pimienta) by the salt (sal).

26. Twin Cities suburb : EDINA
Edina, Minnesota lies just southwest of Minneapolis. The town takes its name from Edinburgh, the capital city of Scotland. It was suggested by a Scottish mill owner at the time a new village was being set up in 1888.

28. Jazz player Malone : KARL
Karl Malone is a retired professional basketball player who was nicknamed “the Mailman”. Malone played most of his career with the Utah Jazz, from 1985 to 2004.

35. “In principio ___ Verbum” : ERAT
“In principio erat Verbum” are the opening lines of what is called the Last Gospel, a passage from the gospel according to St. John. The words (and those that follow) are used in the Roman Catholic Mass, and translate as “In the beginning was the Word”.

38. Things to play with matches? : THE SLOTS
Slot machines earned the nickname “one-armed bandits” simply because they had “one arm”, the handle pulled to operate the machine, and they robbed you of all your money!

43. Its natives are called Loiners : LEEDS
I went to school for a while not far from Leeds in West Yorkshire in the north of England. Prior to the Industrial Revolution, Leeds was a major center for the production and trading of wool, and then with the onset of mechanization it became a natural hub for manufacture of textiles. These days Leeds is noted as a shopping destination and so has been dubbed “the Knightsbridge of the North”. People from Leeds are known locally as “Loiners”, but nobody really knows why.

46. Master’s seeker’s hurdle, briefly : GRE
Passing the Graduate Record Examination (GRE) is usually a requirement for entry into graduate school here in the US.

48. Shell accessory : OAR
A scull is a boat used for competitive rowing. The main hull of the boat is often referred to as a shell. Crew members who row the boat can be referred to as “oars”.

50. Holders of many selfies : CELLS
A “selfie” is a self-portrait, usually one taken with a digital camera or cell phone.

55. Flight for someone 8-Down : LAM
(8D. Withdrawing : BEATING A RETREAT)
To be “on the lam” is to be in flight, to have escaped from prison. “On the lam” is American slang that originated at the end of the 19th century. The word “lam” also means to “beat” or “thrash”, as in “lambaste”. So “on the lam” might derive from the phrase “to beat it, to scram”.

57. The Rams of the A-10 Conf. : URI
The University of Rhode Island (URI) was first chartered as an agricultural school, back in 1888. URI’s main campus today is located in the village of Kingston.