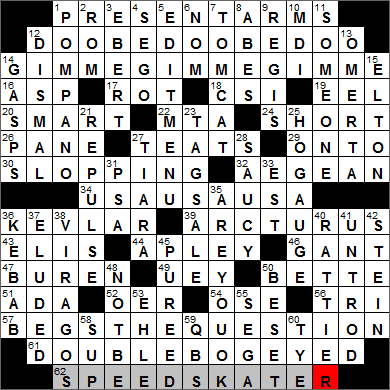 Today’s Wiki-est, Amazonian Googlies
Across
1. Drill command to rifle carriers : PRESENT, ARMS!
Two examples of drill commands are “Present, arms!”, at which point the soldiers being drilled present a rifle or hand salute. The command “Order, arms!” instructs the soldiers to ring their rifle or hand back to their sides.

19. Dragon roll ingredient : EEL
A dragon roll is a sushi dish made from eel, cucumber, seaweed, rice and avocado. Without the eel, I am sure it’s delicious!

22. N.Y.C.-based grp. with its own police department : MTA
The MTA is the Metropolitan Transportation Authority, which has public transportation responsibility in the state of New York (as well as part of Connecticut).

“Philately” is the more formal name given to the practice of collecting postage stamps. The term “philately” was coined (in French, as “philatélie) in 1864 by French collector Georges Herpin. He came up with it from the Greek “phil-” meaning “loving” and “ateleia” meaning “exemption from tax”. Apparently “exemption from tax” was the closest thing Herpin could find to “postage stamp”.

32. Like Lesbos and Lemnos : AEGEAN
The Aegean Sea is that part of the Mediterranean that lies between Greece and Turkey. Within the Aegean Sea are found the Aegean Islands, a group that includes Crete and Rhodes.

Lemnos is a Greek island in the north of the Aegean Sea. According to the Iliad, The god of metallurgy Hephaestus was hurled off Mount Olympus by Zeus and landed on Lemnos, where Hephaestus located his forge.

36. Synthetic fiber used in bicycle tires and bulletproof vests : KEVLAR
Kevlar is a remarkably strong synthetic fiber that was introduced by DuPont in 1965. The material was developed as a lightweight substitute for steel. Kevlar fits the bill, as an equal weight of the synthetic fiber is five times stronger than the alloy. One of the downsides of Kevlar is that its strength degrades when exposed to sunlight.

43. Big Green rivals : ELIS
Elihu Yale was a wealthy merchant born in Boston in 1649. Yale worked for the British East India Company, and for many years served as governor of a settlement at Madras (now Chennai) in India. After India, Yale took over his father’s estate near Wrexham in Wales. It was while resident in Wrexham that Yale responded to a request for financial support for the Collegiate School of Connecticut in 1701. He sent the school a donation, which was used to erect a new building in New Haven that was named “Yale” in his honor. In 1718, the whole school was renamed to “Yale College”. To this day, students of Yale are nicknamed “Elis”, again honoring Elihu.

The Big Green are the athletic teams of Dartmouth College. The Big Green’s unofficial mascot is Keggy the Keg, an anthropomorphic beer keg.

44. John P. Marquand’s “The Late George ___” : APLEY
“The Late George Apley” is a 1937 novel by John Phillips Marquand. It was regarded as Marquand’s first “serious” work, as prior to its publication he was famous for his series of “Mr. Moto” spy novels.

47. Part of a U.S. president’s name that’s Dutch for “neighbors” : BUREN
Martin Van Buren was the eighth President of the US, and also served as Vice President and Secretary of State under President Andrew Jackson. Although Van Buren was the first president who was born a US citizen, he was the only president whose first language wasn’t English, having grown up speaking Dutch.

50. Davis of the screen : BETTE
I must confess that I have a problem watching movies starring Bette Davis. I think I must have seen her play one of her more sinister roles when I was a kid and it gave me nightmares or something. So, I have never seen the 1950 classic “All About Eve”, given that Bette Davis gets top billing. But, the title role of Eve Harrington was played by Anne Baxter, and Ms Baxter’s movies I do enjoy. Coincidentally, on the epic television series “Hotel”, when Bette Davis became ill, it was Anne Baxter who was chosen to take on her role.

51. Nabokov heroine : ADA
The reference here is to the 1969 novel by Vladimir Nabokov called “Ada”. The story takes place in the 1800s on Antiterra, an Earth-like planet that has a history similar to ours but with interesting differences. For example, there is a United States, but the country covers all of North and South America. What we call eastern Canada is a French-speaking province called “Canady”, and western Canada is a Russian-speaking province “Estody”. The plot-line is about a man called Van Veen who, when 14 years old, meets for the first time his cousin, 11-year-old Ada. The two cousins eventually have an affair, only to discover later that they are in fact brother and sister.

54. Suffix of saccharides : -OSE
“Saccharide” is an alternative name for “carbohydrates”. Monosaccharides and disaccharides are mainly sugars, and the term “saccharide” comes from the Greek “sákkharon” meaning “sugar”.

61. Got a +2 on : DOUBLE-BOGEYED
The term “Bogey” originated at the Great Yarmouth Golf Club in England in 1890, and was used to indicate a total round that was one-over-par (and not one-over-par on a particular hole, as it is today). The name Bogey came from a music hall song of the time “Here Comes the Bogey Man”. In the following years it became popular for players trying to stay at par to be “playing against Colonel Bogey”. Then, during WWI, the marching tune “Colonel Bogey” was written and named after the golfing term. If you don’t recognize the name of the tune, it’s the one that’s whistled by the soldiers marching in the great movie “The Bridge on the River Kwai”.

Down
1. Florida food fish : POMPANO
The fish known as a pompano takes its name via Spanish from the Latin “pampinus” meaning “tendril, leaf of a vine”. The name probably comes from the shape of the fish, which somewhat resembles a vine leaf.

4. One of Utah’s state symbols : SEGO
The Sego Lily is the state flower of Utah, and is a perennial plant found throughout the Western United States.

6. Passeport detail : NOM
In France, one will see a person’s name (nom) on his or her passport (passeport).

8. Fivers : ABES
The US five-dollar bill is often called an “Abe”, as President Lincoln’s portrait is on the front. An Abe is also referred to as a “fin”, a term that has been used for a five-pound note in Britain since 1868.

9. Longtime first name in TV talk : REGIS
Regis Philbin is an amazingly popular television personality. Philbin is in such high demand and has had such a long career, that he holds the Guinness World Record for the most time spent in front of a television camera (in excess of 16,000 hours).

13. Code broken by some singers : OMERTA
Omertà is a code of honor in southern Italian society. The term has been adopted by the Mafia to mean a code of silence designed to prevent a Mafioso from becoming an informer. For example, the famous Joe Valachi was someone who broke the code of silence in 1963, informing on the New York Mafia. Valachi’s story was told in the movie “The Valachi Papers”, with Charles Bronson playing the lead.

15. John with an Oscar and a Tony : ELTON
Elton John won the 1995 Best Original Song Oscar for “Can You Feel the Love Tonight” from “The Lion King”. He won the 2000 Best Original Musical Score Tony Award for the musical “Aida”, which he wrote with Tim Rice.

23. Solution for toys in the attic? : TAG SALE
A tag sale is a sale of household belongings, so called because the prices are usually marked on tags attached to the items for sale.

28. Flip : SAUCY
Something described as “flip” is “impertinent, disrespectful”.

31. Spot that may be on the environment, briefly : PSA
Public service announcement (PSA)

36. Food stuck in preparation : KEBAB
The name “kebab” (also “kabob”) covers a wide variety of meat dishes that originated in Persia. In the West, we usually use “kebab” when talking about shish kebab, which is meat (often lamb) served on a skewer. “Shish” comes from the Turkish word for “skewer”.

38. Witchy women : VIRAGOS
The term “virago” can describe a strong or courageous woman. The term can also be used pejoratively to mean a shrewish, domineering woman. “Virago” uses the Latin root “vir” meaning “man”, with the “-ago” suffix feminizing the term.

41. Not printed up? : UNTROD
A path that is “untrod” will exhibit no footprints.

42. Container for a round : STEIN
A stein is a type of beer glass. The term is German in origin, and is short for “Steinkrug” meaning “stone jug”. “Stein” is the German for “stone”.

53. Actress Jennifer of “Pride and Prejudice” : EHLE
My favorite screen version of Jane Austen’s “Pride and Prejudice” is the 1995 miniseries starring Jennifer Ehle and Colin Firth. The wonderful chemistry that Ehle and Firth exhibited on screen extended off the screen and the pair were “an item” for a while. Jennifer Ehle was recently again cast with Colin Firth, in the excellent film “The King’s Speech” from 2010.

55. Sonic creator : SEGA
Sega is a Japanese video game company headquartered in Tokyo. Sega actually started out 1940 in the US as Standard Games and was located in Honolulu, Hawaii. The owners moved the operation to Tokyo in 1951 and renamed the company to Service Games. The name “Sega” is a combination of the first two letters of the words “Se-rvice” and “Ga-mes”.

60. Mooring rope : TYE
In the nautical world, a “tye” can be either a chain or a rope and is used to hoist a spar up a mast. I am not sure that the term can be used for a mooring rope, but I’ve been wrong!