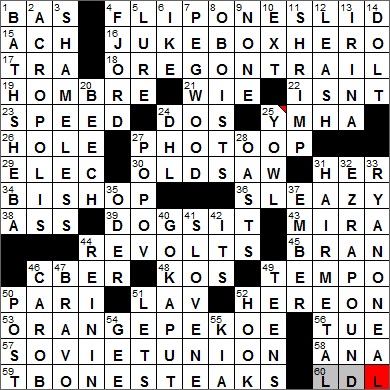 Today’s Wiki-est, Amazonian Googlies
Across
1. Things millions of people have received in history?: Abbr. : BAS
Those would be Bachelors of Arts, in history.

15. Dieter’s beef? : ACH
Clever misdirection … “Dieter” is a German name for a male.

A “beef” is a complaint or a grievance. It’s not quite clear how “beef” came to have this meaning, but one suggestion is that derives from the habit of soldiers at the end of the 1800s complaining about the quality or availability of beef in their rations.

16. Foreigner hit in the musical film “Rock of Ages” : JUKE BOX HERO
I always think that the rock band Foreigner has a very apt name. The band was formed in 1976 by two British guys along with an American who were all living in New York City. Foreigner’s biggest hit is “I Want to Know What Love Is”.

“Rock of Ages” is a 2012 musical film starring Julianne Hough, a singer and dancer who came to prominence as a professional dancer on TV’s “Dancing with the Stars”. The movie features the music of 1980s rock greats including Foreigner, Guns N’ Roses, Bon Jovi and David and Lee Roth. The film is a screen adaptation of an off-Broadway musical of the same name.

18. Western way : OREGON TRAIL
The Oregon Trail was established by fur trappers and traders as early as 1811. The first migrant wagon train traveled the route in 1836, starting off in Independence, Idaho and going as far as Fort Hall, Idaho. In the coming years, the trail was extended for wagons as far as the Willamette Valley in Oregon.

24. Lock combinations? : DOS
You can get your locks combined in different ways depending on your hairdo. Well, you can. Not me …

An “old chestnut” is a joke that is “well worn”. The origin of the expression is very specific. It dates back to a play by William Diamond, first produced in 1816. In the story, one of the characters keeps telling the same joke over and over, with minor variations. The joke is about a cork tree, and an exasperated listener after hearing the joke one time too many refutes the use of the cork tree saying, “A Chestnut. I have heard you tell the joke 27 times and I’m sure it was a Chestnut!”

31. 2013 Spike Jonze love story : HER
Spike Jonze is a movie director whose first feature film was “Being John Malkovich” (1999). Jonze also directed a couple of films for which he wrote the screenplays, namely “Where the Wild things Are” (2009) and “Her” (2013). Jonze also co-created the MTV show “Jackass”. I can’t stand that show, said he grumpily …

34. Piece in a fianchetto opening : BISHOP
In chess, when the bishop advances to the second square of the adjacent knight’s file, such a development is called a “fianchetto”.

It is believed that the game of chess originated in northwest India, evolving from a 6th-century game called “chaturanga”, a Sanskrit word meaning “four divisions”. These four (military) divisions were represented in the game:

45. Hominy makers extract it : BRAN
Hominy is a dish consisting of dried kernels of maize that have been treated with an alkali. The term “hominy” is derived from a Native American word for “maize”.

46. One attached to a handle : CBER
A CBer is someone who operates a Citizens’ Band radio. In 1945, the FCC set aside certain radio frequencies for the personal use of citizens. The use of the Citizens’ Band increased throughout the seventies as advances in electronics brought down the size of transceivers and their cost. There aren’t many CB radios sold these days though, as they have largely been replaced by cell phones.

50. ___ passu (on equal footing) : PARI
“Pari passu” is Latin for “with an equal step” and is used in the sense of “ranking equally” or “without preference”.

51. Head, for short : LAV
Our word “lavatory” originally referred to a washbasin, and comes from the Latin “lavatorium”, a place for washing. In the 1600s a “lavatory” came to mean a washroom, and in the 1920s a toilet.

The name Sri Lanka translates from Sanskrit into English as “venerable island”. Before 1970, Sri Lanka was known as Ceylon, a name given to the country during British rule. The lion on the country’s national flag symbolizes the fight against British colonialism.

56. Day of the week of the great stock market crash, Oct. 29, 1929 : TUE
The Wall Street Crash of 1929 signalled the end of the Roaring Twenties and the start of the Great Depression. That same year, 23.000 people committed suicide in the US, the highest number ever.

57. It once had many satellites in its orbit : SOVIET UNION
Before its collapse, the Soviet Union had control of many East European satellite nations.

59. Prized cuts : T-BONE STEAKS
The T-bone and porterhouse are related cuts of meat, with the latter being a larger version of the former.

60. Nutritional inits. : LDL
LDL (low-density lipoprotein) is one of the compounds responsible for transporting fats around the body. When LDL is combined with cholesterol it can be referred to as “bad cholesterol”. This is because LDL actually transports cholesterol into the inner walls of blood vessels leading to atherosclerosis.

Down
1. Biblical figure famously painted nude by Rembrandt : BATHSHEBA
According to the Bible, Bathsheba the wife, first of Uriah the Hittite and then of David, King of Israel. Bathsheba was also the mother of Solomon, who succeeded David as king.

Several artists depicted “Bathsheba at her Bath”, most famously Rembrandt.

2. Certain temple locale : ACROPOLIS
The term “Acropolis” translates from Greek as “high city” or “city on the extremity”. In English we use the term “Citadel” to mean the same thing thing. The most famous citadel bearing the name is the Acropolis of Athens. This Acropolis is a large, flat-topped rock in the city of Athens that rises almost 500 feet above sea level. The most recognizable building that stands on the Acropolis is the Parthenon, also known as the Temple of Athena.

6. Nickname on old political buttons : IKE
“I Like Ike” was a political slogan that originated with the grassroots movement to get Dwight D. Eisenhower to run for president in the 1952 presidential election.

7. Watchmaker’s cleaning tool : PEGWOOD
“Pegwood” is a soft wood that is used in skewer form for a variety of tasks by watchmakers. The pieces can be sharpened and used to remove dirt. They can also be combined with oil and used to polish precision parts.

13. “Three Sisters” sister : IRINA
Olga, Masha and Irina were the “Three Sisters” in the play by Anton Chekhov. The three title characters were inspired by the three Brontë sisters, the English authors.

24. Shipping choice : DHL
Back in the sixties, Larry Hillblom was making pocket money as a Berkeley law student by doing courier runs between San Francisco and Los Angeles. After law school, Hillblom decided to parlay his experience into his own business and set up a courier service flying bills of lading ahead of freight from San Francisco to Honolulu. He brought in two buddies, Adrian Dalsey and Robert Lynn, as partners and the three were soon hopping on and off commercial flights and gradually making more and more money. And DHL was born … D (for Dalsey) H (for Hillblom) L (for Lynn).

27. Low-priced American vodka known affectionately (and ironically) as “Russia’s finest” : POPOV
Popov vodka is is produced in America by the British company Diageo. Popov fills a niche in the low end of the vodka market. This American alcoholic drink is sometimes given the tongue-in-cheek nickname “Russia’s Finest”.

28. Brewers’ hot spots : OASTS
An oast is a kiln used for drying hops as part of the brewing process. It might also be called an “oast house”.

31. Music genre of Poison and Guns N’ Roses : HAIR METAL
“Hair metal” is also known as “glam metal” and is a sub-genre of hard rock. Glam metal is a bit much for me, but I was a fan of glam rock in the seventies.

32. Poet arrested for treason in 1945 : EZRA POUND
Ezra Pound was an American poet who spent much of his life wandering the world, spending years in London, Paris, and Italy. In Italy, Pound’s work and sympathies for Mussolini’s regime led to his arrest at the end of the war. His major work was the epic, albeit incomplete, “The Cantos”. This epic poem is divided into 120 sections, each known as a canto.

33. Golden Globes nominee who was a Golden Gloves boxer : RYAN O’NEAL
Actor Ryan O’Neal got his big break in the sixties on television. He appeared in the prime-time soap opera “Peyton Place”, opposite fellow newcomer Mia Farrow. Then in 1970 he landed a starring role in the hit movie “Love Story”, which established him in Hollywood. O’Neal was an amateur boxer before he turned to acting, and established a respectable record Golden Gloves competitions

35. River through Silesia : ODER
The Oder rises in the Czech Republic, and forms just over a hundred miles of the border between Germany and Poland.

Silesia is a region in Central Europe that lies mainly in Poland, but also in the Czech Republic and Germany. Silesia is home to large coalfields, and as a result the region if highly industrialized.

40. Quit working : GO KAPUT
“Kaput” comes to us from French via German. “Capot” means “not having won a single trick” in the French card game called Piquet. We use the term today informally, to mean incapacitated or destroyed.

41. Austrian neighbor : SLOVENE
The Republic of Slovenia is a country in Central Europe, bordered by Italy, Austria, Croatia and Hungary. Given its geographic location, the country has been part of various realms over the centuries, most recently being part of Yugoslavia. Slovenia declared independence from former Yugoslavia in 1991, and is now a member of the European Union.

46. Health store snack ingredient : CAROB
The carob is a tree or shrub in the pea family, mainly grown for its seed pods. The carob seeds are dried or roasted, and when powdered or chipped make a good substitute for chocolate.

49. Nancy Drew never left hers behind : TEENS
The “Nancy Drew” mystery stories were produced by the Stratemeyer Syndicate. The founder of the Syndicate hired a team of writers to produce the “Nancy Drew” novels, but listed the author of each book as the fictional Carolyn Keene.

50. Honeycomb maker : POST
Honeycomb is a brand of breakfast cereal that has been made by Post since 1965.

55. “The Power to Surprise” sloganeer : KIA
Kia Motors is the second largest manufacturer of cars in South Korea, behind Hyundai (and Hyundai is a part owner in Kia now). In recent years, Kia has focused on sales into Europe, and has been remarkably successful.