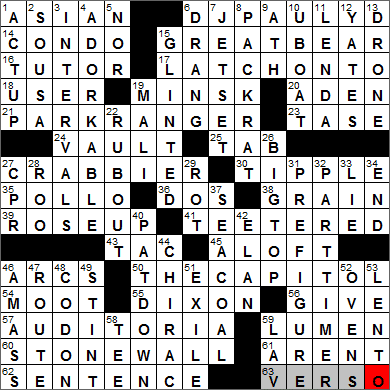 Today’s Wiki-est, Amazonian Googlies
Across
1. Like cork trees and flying lizards : ASIAN
The Cork-tree is a genus of tree with a corky bark that is native to east and northeast Asia. The Cork-tree’s bark isn’t sufficiently thick for use in commercial cork production. Most cork comes from the cork oak, a tree that is native to southwest Europe and northwest Africa.

Lizards of the Draco genus are also known as “flying lizards” or “flying dragons”. Flying lizards live in trees, and can glide from branch to branch. They “fly” because they have a a wing-like membrane that is stretched across their ribs.

6. “Jersey Shore” housemate’s music-biz name : DJ PAULY D
DJ Pauly D is the stage name of Paul DelVecchio, a television personality and disc jockey who made a name for himself on the MTV reality show “Jersey Shore”. He also has his own spin-off show called “The Pauly D Project”.

14. Jersey Shore vacation option : CONDO
The words “condominium” and “apartment” tend to describe the one type of residential property, a private living space with facilities shared with others residing in the same building or complex. The difference is that a condominium is usually owned, and an apartment is rented. At least that’s how it is in the US. The word “condominium” comes from the Latin “com” (together) and “dominum” (right of ownership).

15. Big Dipper’s setting : GREAT BEAR
The arrangement of seven stars known as the Big Dipper is made up of the seven brightest stars in the constellation Ursa Major, also known as the Great Bear.

19. Where Lee Harvey Oswald was a lathe operator : MINSK
Lee Harvey Oswald was the assassin who killed President John F. Kennedy in Dallas on November 22, 1963. Oswald served with the US Marines from 1956 until 1959. One month after leaving the military, Oswald traveled to the Soviet Union via a circuitous route across the Atlantic and Europe. He entered the Soviet Union on a visa that was only valid for one week, but once in the country he made it clear that he wanted to stay. Oswald settled in Minsk for a few years, working there as a lathe operator and living in government-subsidized housing. In 1961, Oswald married a 19-year-old Russian student and the couple had a baby girl a year later. Oswald grew tired of life in Russia though, so he and his new family moved to the US in 1962, settling in the Dallas area. Oswald’s widow still lives in Texas.

23. Take down with a charge : TASE
Victor Appleton wrote a novel for young adults called “Tom Swift and His Electric Rifle”. The company that developed the TASER electroshock weapon named its product as a homage to the novel. The acronym TASER stands for “Thomas A. Swift’s Electric Rifle”.

25. Setting that makes things right? : TAB
Like most features on our computer keyboards, the tab key is a hangover from the days of typewriters. When using a typewriter, making entries into a table was very tedious as it involved lots of tapping on the spacebar and backspace key. So, a lever was added to typewriters that allowed the operator to “jump” across the page to positions that could be set by hand. Later this was simplified to a tab key, which could be depressed causing the carriage to jump to the next tab stop in much the same way that the modern tab key works on a computer.

36. Buzzes, say : DOS
A buzzcut is a closely-cropped hairstyle (do).

46. Hyperbola parts : ARCS
A hyperbola is a curve in a plane, a curve with two parts that are mirror images of each other.

50. House meeting place : THE CAPITOL
The United States Capitol is home to the US Congress, and sits on Capitol Hill in Washington, D.C. It was Pierre Charles L’Enfant who laid out the nation’s new capital city. L’Enfant’s plans called for a “Congress House” as home for the legislative branch of the government. It was Thomas Jefferson who insisted that the name be changed to “Capitol”.

55. Predictor of fame : DIXON
Jeane Dixon was a famous American astrologer who wrote a popular syndicated astrology column for many years.

57. School meeting places : AUDITORIA
“Auditorium” (plural “auditoria”) is the Latin word for a lecture room, literally meaning a “place where something is heard”. “Auditorium” is derived from “audire” the Latin for “to hear”.

59. Photometry unit : LUMEN
The lumen is a measure of the amount of visible light emitted by a source.

63. Leaf part : VERSO
The left and right pages of a book or magazine are known in publishing circles as verso and recto. Recto comes from the Latin for “right”, and verso comes from the Latin word for “turned”. The idea is that the left side of the page is “turned” and is the reverse of the recto/right side.

Down
1. Go on the fritz : ACT UP
The American slang term “on the fritz” means “inoperative”. There doesn’t seem to be a definitive etymology for the term, although there are indications it has a theatrical origin.

2. Monty Python theme composer : SOUSA
John Philip Sousa was a composer and conductor from Washington, D.C. Sousa was well known for his patriotic marches and earned himself the nickname “The American March King”. He served as a member of the US Marine Band from 1868 to 1875, and after leaving the Marines learned to conduct and compose. One of the Sousa compositions that is well-known around the world is called “The Liberty Bell”, a tune used as the musical theme for BBC Television’s “Monty Python’s Flying Circus”. Sousa also wrote “Semper Fidelis”, which is the official march of the US Marine Corps.

4. Like cute nerds, in slang : ADORKABLE
I consider “dork” to be pretty offensive slang. It emanated in the sixties among American students, and has its roots in another slang term, a term for male genitalia.

5. “___ did you nothing hear?”: Hamlet : NOR
“Hamlet” is William Shakespeare’s longest play, and was also one of most popular of the playwright’s works during his lifetime.

6. Stress, to Strauss : DRANG
“Sturm und Drang” translates from the German into “Storm and Stress” or perhaps “Storm and Impulse”. “Sturm und Drang” was the name given to a movement in German literature and music in the latter half of the 18th century. The writer Johann Goethe was a major proponent of the movement, which took its name from a play by Maximilian Klinger.

8. Keeping buff? : PACK RAT
A pack rat is rodent that can also be called a woodrat. The pack rat is so called because it frequently drags back objects to its nest. We’ve been using the term “pack rat” for a hoarder since the mid 1800s, so it’s not certain if the rodent was named for the human, or the human for the rodent.

10. Raider in the battle of the St. Lawrence : U-BOAT
U-boat stands for the German “Unterseeboot” (undersea boat). Notably, a U-boat sank the RMS Lusitania in 1915, an event that helped propel the US into WWI.

The Battle of the St. Lawrence was a persistent marine engagement in the Gulf of St. Lawrence and surrounding area during WWII. The antagonists were German U-boats and Canadian merchant and naval ships. At the start of the war, Canada had relatively few vessels, but by the end of the war the Royal Canadian Navy had the third-largest fleet in the world.

11. “___ Paw” (Oscar-winning Disney short) : LEND A
“Lend a Paw” is an animated short from the Walt Disney studio that was released in in 1941. The cartoon features Mickey Mouse and Pluto.

12. “Eyewitness” director Peter : YATES
Peter Yates was an English film director and producer. His first film as a director is very well known by folks back in my part of the world. Released in 1963, the film “Summer Holiday” is a very lightweight vehicle for the singer Cliff Richard. Over in the US Yates is better remembered for directing the likes of “Bullitt” (1968), “Breaking Away” (1979) and “The Deep” (1977).

13. Hurdy-gurdy sound : DRONE
A hurdy gurdy is a stringed instrument with a rosined wheel that rotates and rubs against the strings to produce sounds.

19. Tuareg rebellion locale of 2012 : MALI
The Republic of Mali is a landlocked country in western Africa, south of Algeria. The country’s most famous city is … Timbuktu …

The Tuareg are a nomadic people who inhabit the Saharan interior of North Africa, mainly in Niger, Mali and Algeria.

28. Neighbor of Rabbit : ROO
Like most of the characters in A. A. Milne’s “Winnie the Pooh”, Roo was inspired by on a stuffed toy belonging to Milne’s son, Christopher Robin.

29. Bunk : ROT
The word “bunk” is short for “bunkum”, the phonetic spelling of “Buncombe”, which is a county in North Carolina. Supposedly, a state representative made a dull and irrelevant speech that was directed to his home county of Buncombe, bringing the term “bunkum” into the language with the meaning of “nonsense”. The derivative word “debunk” first appeared in a novel by William Woodward in 1923, when he used it to describe “taking the bunk out of things”.

37. Constituent of molding sand : SEA-COAL
Molding sand is a type of sand that is used in sand casting, a metal casting process that uses sand as the molding material. One of the key ingredients in the sand mixture is “sea-coal”, a material that helps prevent the liquid metal sticking to sand particles.

42. Animation : ELAN
Our word “élan” was imported from French, in which language the word has a similar meaning to ours i.e “style” or “flair”.

44. European president who attended Harvard : CHIRAC
Jacques Chirac served as French President from 1995 to 2007. He also served twice as Prime Minister of France, and as the Mayor of Paris. At the end of 2011, Chirac was found guilty of embezzling public funds and was given a 2-year suspended sentence.

48. One of 64 in a genetic table : CODON
Proteins are synthesised in the body from amino acids, which are linked together in specific sequences that are determined by the genetic code. The language of the code is sequence of nucleotides. The nucleotides are arranged in groups of three called “codons”, with each codon determining a specific amino acid.

51. Napoleon, notably : EXILE
Napoleon was sent into exile twice. A coalition of European powers sent him to the island of Elba in Tuscany in 1814, only for him to escape after a year and return to power. After Wellington defeated him at Waterloo, Napoleon was dispatched to the British-owned island of St. Helena in the South Atlantic, where he spent the last six years of his life.

53. Molto adagio : LENTO
A lento passage is a piece of music that has a slow tempo.

An adagio is a piece of music with a slow tempo. The “adagio” marking on the score is an instruction to play the piece slowly and in a stately manner. The word adagio is Latin for “at ease”.

59. Head : LAV
Our word “lavatory” originally referred to a washbasin, and comes from the Latin “lavatorium”, a place for washing. In the 1600s a “lavatory” came to mean a washroom, and in the 1920s a toilet.