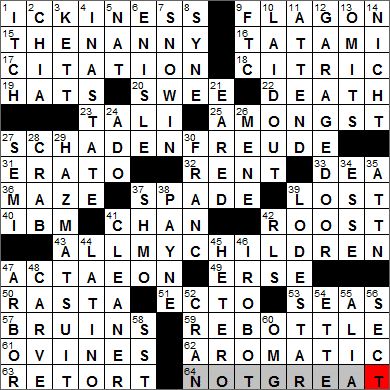 CROSSWORD SETTER: Matt Ginsberg
THEME: Distressing TV Shows … we have a mini-theme today. The names of three TV shows spell out a parent’s distressed cry, when read in sequence:

Today’s Wiki-est, Amazonian Googlies
Across
9. Container for Rip Van Winkle : FLAGON
A flagon is a large jug with a lid, traditionally used for holding beer or wine.

“Rip Van Winkle” is a short story written by Washington Irving. The story was an instant hit, and was adapted for the stage just a few years after its first publication in 1819. Since then “Rip” has featured on the small screen, big screen and even in an operetta.

15. TV show that debuted on 11/3/93 (and start of a parent’s distressed cry?) : THE NANNY
“The Nanny” is a sitcom that originally aired in the nineties and starred Fran Drescher in the title role. The show was created and produced by Peter Marc Jacobson who was Drescher’s husband at the time.

16. Furnishing in many a tearoom : TATAMI
A tatami is a traditional mat used on floors in Japan. The term “tatami” comes from the Japanese word “tatamu” meaning “to fold”, reflecting the fact that the mat is designed to be folded up for storage.

20. ___’ Pea : SWEE
Originally Popeye used the nickname “Swee’pea” to address his girlfriend Olive Oyl. Then along comes a baby, found on Popeye’s doorstep. Popeye adopts the little guy and raises him, calling him “Swee’Pea”.

23. Anklebones : TALI
The collection of seven bones in the foot just below the foot are known collectively as the tarsus. One of those bones is the talus (plural “tali”), more commonly called the ankle bone. The talus is the lower part of the ankle joint and articulates with the lower ends of the tibia and fibula in the lower leg.

27. Guilty pleasure? : SCHADENFREUDE
Our word schadenfreude of course comes from German. “Schaden” means harm or adversity, and “Freude” means joy. So, schadenfreude is pleasure derived from the misfortune of others. Quite the opposite of pity.

31. Poetic member of a Greek nonet : ERATO
In Greek mythology, the muses are the goddesses who inspire the creation of literature and the arts. The number of muses is a subject of debate at times, but the most popular view is that there are nine:

I hadn’t seen the AMC drama “Breaking Bad” until relatively recently when my wife borrowed the first and second seasons from our local library. It is a well-written show about a high school teacher stricken by lung cancer who turns to a life of crime to make money.

36. Setting for “The Shining” : MAZE
In the 1980 film “The Shining”, based on the Stephen King novel of the same name, the action takes play at the Overlook Hotel. Some of the scarier scenes takes place in the hedge maze that grows on the hotel’s grounds.

37. Bogart role : SPADE
The classic detective novel “The Maltese Falcon” was written by Dashiell Hammett and first published in 1930. The main character if of course Sam Spade, famously played by Humphrey Bogart in the third movie adaptation of the book, released in 1941.

39. TV show that debuted on 9/22/04 (middle of the cry) : LOST
“Lost” is a science fiction drama that originally aired from 2004 to 2010. The show kicks off with a passenger airliner crashing a tropical island as it flies from Sydney bound for Los Angeles. I haven’t seen the show myself and hear that the intriguing plot didn’t really come to a satisfying conclusion. Others would disagree …

40. Corporate giant co-founded by Thomas Watson : IBM
Thomas J Watson was at the helm of IBM during the company’s greatest periods of growth, from 1914 to 1956. There is a famous quotation often attributed to Watson: “I think there is a world market for maybe five computers”. However, there seems to be no evidence that he ever said such a thing, or even agreed with its substance.

41. Jackie with acting chops : CHAN
Jackie Chan is an actor from Hong Kong who is noted for his action and martial arts films. When Chan was 17-years-old he featured as a stunt actor in Bruce Lee movies. He also starred in the 1982 Hong Kong action film “Dragon Lord” which includes a fight scene that required an amazing 2900 takes, a record in the movie industry.

43. TV show that debuted on 1/5/70 (end of the cry) : ALL MY CHILDREN
“All My Children” was the first daytime soap opera to debut in the seventies. Star of the show was Susan Lucci who played Erica Kane. The show was cancelled in 2011 after having being on the air for 41 years.

47. Greek hunter trained by Chiron : ACTAEON
The hunter of Greek mythology called Actaeon was trained by the centaur Chiron, as was Achilles.

49. Language that gave us “slogan,” originally meaning “battle cry” : ERSE
Our word “slogan” comes from the Gaelic “sluagh-ghairm”, which was a battle cry used in Scotland and Ireland. We’ve been using “slogan” to mean a phrase used by a political or other movement since the early 1700s.

50. Dreaded sort? : RASTA
I must admit that I don’t really understand Rastafarianism. I do know that a “Rasta”, like Bob Marley, is a follower of the movement. Some say that Rastafarianism is a religion, some not. I also know that it involves the worship of Emperor Haile Selassie I of Ethiopia.

53. Noted septet : SEAS
The phrase “the seven seas” has been used for centuries by many different peoples. The actual definition of what constitutes the collection of seven has varied depending on the period and the culture. Nowadays we consider the seven largest bodies of water as the seven seas, namely:

57. Trojan rivals : BRUINS
The UCLA Bruins mascots are Joe and Josephine Bruin, characters that have evolved over the years. There used to be “mean” Bruin mascots but they weren’t very popular with the fans, so now there are only “happy” Bruin mascots at the games.

61. Merino, Suffolk and Dorset : OVINES
The Latin word for “sheep” is “ovis”, giving us the adjective “ovine”, meaning “like a sheep”.

Down
2. Pet project? : CHIA
Chia is a flowering plant in the mint family, and the Chia Pet is an invention of a San Francisco company. Chia Pets are terracotta figurines to which are applied moistened chia seeds. The seeds sprout and the seedlings become the “fur” of the Chia Pet.

3. “Etta ___” (old comic strip) : KETT
“Etta Kett” was a comic strip that first ran in 1925. The strip ceased to be published in 1974, when creator Paul Robinson passed away. The initial intent was to offer tips to teenagers on manners and social graces, hence the name of the title character Etta Kett (sounds like “etiquette”).

5. Turner of pages in history : NAT
Nat Turner was a slave in Virginia who led a slave rebellion in 1831 that led to the deaths of over a hundred people. Half of the casualties were white,and half were black. The 55 white deaths took place on the day of the rebellion as a growing mob of slaves traveled from house-to-house freeing fellow slaves but also killing any white people they came across; men, women and children. The rebellion was suppressed within two days by a white militia. Slaves involved in the rebellion were tried for insurrection and related crimes, and a total of 56 blacks were executed on suspicion of involvement in the uprising. In the aftermath, life for slaves became even more difficult as any freedoms that they had earned were largely curtailed.

6. Put on a key? : ENISLE
A “key” (also “cay”) is a low island offshore, as in the Florida Keys. Our term in English comes from the Spanish “cayo” meaning “shoal, reef”.

8. Burnsian “ago” : SYNE
The song “Auld Lang Syne” is a staple at New Year’s Eve, the words of which were written by Scottish poet Robbie Burns. The literal translation of “Auld Lang Syne” is “old long since”, but is better translated as “old times”. The sentiment of the song is “for old time’s sake”.

9. Govt. agency that supports competition : FTC
The Federal Trade Commission (FTC) was established in 1914 with the mission of protecting consumers. The FTC runs the National Do Not Call Registry which can limit the amount of telemarketing calls that consumers receive. To register your number, simply go to the website www.donotcall.gov.

26. Word on a biblical wall : MENE
In the Book of Daniel, there is the story of the words “Mene, Mene, Tekel u-Pharson” being written mysteriously on the walls of the royal place. This story is the origin of the phrase “the writing’s on the wall”.

37. Chucklehead : SHMO
“Schmo” (also “shmo”) is American slang for a dull or boring person, from the Yiddish word “shmok”.

38. Alexander who directed “Nebraska” : PAYNE
Alexander Payne is a film director from Omaha, Nebraska. Payne’s most famous movies would be “Election” (1999), “About Schmidt” (2002) and “Sideways” (2004), all of which I would recommend. Payne was married for a few years to actress Sandra Oh who he directed in the film “Sideways”.

39. Guiding light : LODESTAR
A lodestar (an term rarely used now) is a bright star that’s used nor navigation purposes. The most famous would be Polaris, the Pole Star, which is very close to true north. The name lodestar comes from the days of early compasses, when a naturally magnetic stone was used to detect magnetic north. These stones were called lodestones.

41. Pledge, e.g. : CLEANER
Pledge is a dusting and cleaning product made by S. C. Johnson. Pledge is sold in other countries as Pronto, Pliz and Blem.

44. Marco Rubio, for one : LATINO
Marco Rubio is the junior US Senator from Florida, a member of the Republican Party who has been in office since January 2011. Senator Rubio’s name has been closely associated with the Tea Party movement.

45. Straight : HETERO
“Heterosuxuality” is sexual attraction between person of the opposite gender. The profix “hetero-” comes from the Greek “heteros” meaning “different, other”.

46. Will Smith flick of 2004 : I, ROBOT
“I, Robot” is an interesting 2002 science fiction film starring Will Smith that is loosely based on the excellent collection of short stories of the same name by Isaac Asimov.

47. Subject of a celebration on the last Friday in April : ARBOR
Arbor Day is a holiday each year in which people traditionally plant and care for trees. The first Arbor Day was held way back in 1872.

58. Retired boomer : SST
The most famous supersonic transport (SST) is the retired Concorde. Concorde was developed and produced under an Anglo-French treaty by France’s Aérospatiale and the UK’s British Aircraft Corporation (BAC). Concordes were mainly operated by Air France and British Airways, with both companies buying the planes with substantial subsidies from the French and British governments.