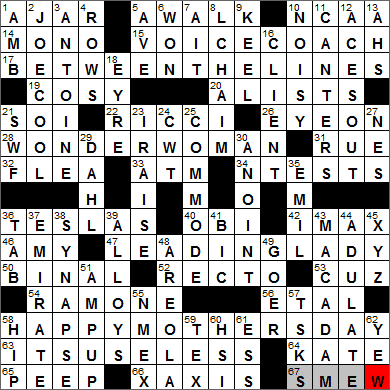 CROSSWORD SETTER: Patrick Merrell
THEME: Hi Mom! … Today’s themed answers honor Moms everywhere. There is also a hidden message in the grid as “HI, MOM” is written between BETWEEN THE LINES across the center of the grid:

17A. Interstitially, say BETWEEN THE LINES (HI, MOM!)

28A. Wearer of a red-starred tiara WONDER WOMAN
47A. Marquee actress LEADING LADY
58A. May delivery HAPPY MOTHER’S DAY!

Today’s Wiki-est, Amazonian Googlies
Across
1. Allowing some ventilation, say AJAR
Our word “ajar” is thought to come from Scottish dialect, in which “a char” means “slightly open”.

10. Org. with Divisions I, II and III NCAA
The National Collegiate Athletic Association (NCAA) dates back to the Presidency of Theodore Roosevelt. When his son broke his nose playing football at Harvard, President Roosevelt turned his attention to the number of serious injuries and even deaths occurring in college sports. He instigated meetings between the major educational institutions leading to the formation of the Intercollegiate Athletic Association of the United States (IAAUS) in 1906, which was given the remit of regulating college sports. The IAAUS became the NCAA in 1910.

14. Teen woe MONO
Mononucleosis is a viral disease that is also simply “Mono” or glandular fever. The virus that causes the disease can only be contracted through direct exposure to infected saliva. As a result, Mono is often called “the kissing disease”.

28. Wearer of a red-starred tiara WONDER WOMAN
Wonder Woman first appeared in print in 1941, in a publication from DC Comics. As she was created during WWII, Wonder Woman’s first foes were the axis powers. In the less realistic world her biggest foe was and still is Ares, a “baddie” named for the Greek mythological figure.

31. Bitter herb RUE
“Rue” is a common name for the herb Ruta graveolens. Rue can be used medicinally, and sparingly as a herb in cooking.

34. ’40s blowups N-TESTS
The testing of US nuclear weapons by the US at Bikini Atoll in the middle of 1946 went by the codename “Operation Crossroads”. The tests used A-bombs and were designed to measure the effect of blasts on navy vessels. There were three tests planned, but the third had to be cancelled as the Navy couldn’t decontaminate the ships used in the second test.

36. Modern electric cars TESLAS
Tesla Motors is a manufacturer of electric vehicles based in Palo Alto, California. Tesla is noted for producing the first electric sports car, called the Tesla Roadster. The current base price of a roadster is about $100,000, should you be interested …

40. Tokyo strip? OBI
The sash worn as part of traditional Japanese dress is known as an obi. The obi can be tied in what is called a butterfly knot.

42. Kind of screen IMAX
The IMAX Corporation, which is behind the IMAX film format, is a Canadian company. The impetus for developing the system came after Expo ’67 in Montreal. Back then large format screenings were accomplished using multiple projectors with multiple screens, with images basically stitched together. The team behind the IMAX technology set out to simplify things, and developed a single-camera, single-projector system.

46. Grant or Carter AMY
Amy Grant is known as “The Queen of Christian Pop” and her most famous songs are Gospel and Contemporary Christian works. Grant recorded two songs that made it to number one in the commercial charts: “The Next Time I Fall” (1981, duet with Peter Cetera) and “Baby Baby” (1991).

Amy Carter is the only daughter of President Jimmy Carter. She is the youngest child and has three older brothers. After growing up in the White House, Amy Carter turned to political activism and was very vocal on US policy towards South African apartheid and Central America. She was arrested at a 1986 demonstration protesting CIA recruitment on a university campus, but was later acquitted. Today she has a close relationship with her father and is on the board of counselors of the Carter Center. In 1995 she provided the illustrations for her father’s book for children, “The Little Baby Snoogle-Fleejer”.

47. Marquee actress LEADING LADY
A marquee is a sign that placed over the entrance to a theater, and often bears the names of the leading lady and leading man in a film or performance.

52. Verso’s flip side RECTO
The left and right pages of a book or magazine are known in publishing circles as verso and recto. Recto comes from the Latin for “right”, and verso comes from the Latin word for “turned”. The idea is that the left side of the page is “turned” and is the reverse of the recto/right side.

53. Explanation that doesn’t explain anything, informally CUZ
Because, ‘cause, ‘cos, cuz …

54. Surname in punk rock RAMONE
Joey Ramone was the frontman for the punk rock band called the Ramones. Joey Ramone died in 2001 and two years later the block where he lived on East 2nd Street in New York City was renamed Joey Ramone Place.

58. May delivery HAPPY MOTHER’S DAY
Note the official punctuation in “Mother’s Day”, even though one might think it should be “Mothers’ Day”. President Wilson, and Anna Jarvis who created the tradition, specifically wanted Mother’s Day to honor the mothers within each family and not just “mothers” in general, so they went with the “Mother’s Day” punctuation.

64. Title parent in a TLC reality series KATE
“Jon & Kate Plus 8” is a reality show that was later renamed to “Late Plus 8”. The show chronicles the lives of Jon and Kate Gosselin and their 8 kids, one set of twins and one set of sextuplets. The show’s change of name was necessitated by Jon and Kate getting divorced in 2009.

67. Northern duck SMEW
The smew is a beautiful-looking species of duck found right across northern Europe and Asia.

2. Cartoon character with shades JOE COOL
When Snoopy adopted his “Joe Cool” alias, he put on sunglasses and just leaned against a wall doing nothing.

3. Fats Domino’s first name ANTOINE
Antoine “Fats” Domino was born and raised in New Orleans, with Creole as his first language. He made into the big time in 1949 when he recorded an early rock and roll record called “The Fat Man”. That record sold over a million copies, the first rock and roll record to achieve that milestone.

4. Melees ROWS
“Melee” comes from the French “mêlée”, and in both languages the word means a “confused fight”.

5. Caesar’s greeting AVE
“Ave” is Latin for “hail” and was used by the Romans as a greeting and a salutation.

7. Island in the Thames AIT
Aits are little islands found in a river. Aits aren’t formed by erosion, but by the deposition of silt over time. As a result, aits often have a long and narrow shape running parallel to the banks as the sediment builds up with the flow of the water. Many of the islands in the River Thames in England have been given the name “Ait”, like Raven’s Ait in Kingston-upon-Thames, and Lot’s Ait in Brentford.

18. Literary character who says “Gentle reader, may you never feel what I then felt!” EYRE
“Jane Eyre” is of course the novel written by Charlotte Brontë, under the pen name Currer Bell. Over the years, I’ve shared here on my blogs that the “Jane Eyre” story line is a little too dark and Gothic for my taste, but a very persuasive blog reader convinced me to look more at the romantic side of the story and give it a second chance. I watched a wonderful 4-hour television adaptation of the novel made by the BBC a while back and I have to say that because I was focused on the relationship between Jane and Rochester, I was able to push past the Gothic influences (that depress me) so I really enjoyed the story. I thoroughly recommend the 2006 BBC adaptation to fans of the novel.

25. Can COMMODE
A commode is a toilet. Back in the 1700s, a commode was a chest of drawers, a name derived from the French word “commode” meaning “convenient”. In the mid-1800s, the term was applied to a chamber pot, which was regarded as a “convenience”.

27. Super ___ NES
The Nintendo Entertainment System (NES) was sold in North America from 1985 to to 1995. The NES was the biggest selling gaming console of the era.

29. Children’s author who won three Edgars DAHL
Roald Dahl’s name is Norwegian. Dahl’s parents were from Norway, although Dahl himself was Welsh. Dahl became one of the most successful children’s authors of the twentieth century. Two of his most famous titles are “James and the Giant Peach” and “Charlie and the Chocolate Factory”.

The Edgar Allan Poe Awards (the Edgars) are presented annually by the Mystery Writers of America.

35. Title boy in a 1964 Disney film EMIL
“Emil and the Detectives” is a novel first published in 1929. It was originally written in German and was titled “Emil und die Detektive”. The Disney company released a screen adaptation in 1964.

36. Space maker TAB
Like most features on our computer keyboards, the tab key is a hangover from the days of typewriters. When using a typewriter, making entries into a table was very tedious as it involved lots of tapping on the spacebar and backspace key. So, a lever was added to typewriters that allowed the operator to “jump” across the page to positions that could be set by hand. Later this was simplified to a tab key, which could be depressed causing the carriage to jump to the next tab stop in much the same way that the modern tab key works on a computer.

38. Nerve junction SYNAPSE
A synapse is a junction between a nerve cell and another cell over which an electrical or chemical signal can pass.

41. Certain lighter or highlighter BIC
Société Bic is a French company, based in Clichy in France. The first product the company produced, more than fifty years ago, was the Bic Cristal ballpoint pen that is still produced today. Bic also makes other disposable products such as lighters and razors.

43. Driving surface MACADAM
“Tarmac” and “macadam” is of course short for “tarmacadam”. In the 1800s, Scotsman John Loudon McAdam developed a style of road known as “macadam”. Macadam had a top-layer of crushed stone and gravel laid over larger stones. The macadam also had a convex cross-section so that water tended to drain to the sides. In 1901, a significant improvement was made by English engineer Edgar Purnell Hooley who introduced tar into the macadam, improving the resistance to water damage and practically eliminating dust. The “tar-penetration macadam” is the basis of what we now call Tarmac.

60. Confucian scholar Chu ___ HSI
Zhu Xi (also Chu Hsi) was a scholar in the Song Dynasty in China, and was a noted neo-Confucian.