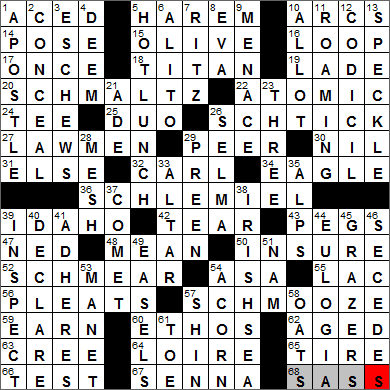 CROSSWORD SETTER: Gayle Dean
THEME: Schomething Yiddish … each of today’s themed answers is a word that has Yiddish origins, and each starts with SCH:

Today’s Wiki-est, Amazonian Googlies
Across
5. Women’s room in a Turkish palace : HAREM
“Harem” is a Turkish word, derived from the Arabic for “forbidden place”. Traditionally a harem was the female quarters in a household in which a man had more than one wife. Not only wives (and concubines) would use the harem, but also young children and other female relatives. The main point was that no men were allowed in the area.

15. ___ Oyl : OLIVE
“Thimble Theater” was the precursor comic strip to the famous “Popeye” drawn by E. C. Segar. Before Popeye came into the story, the brother and sister characters Castor Oyl and Olive Oyl were the main protagonists. And then along comes a sailor …

18. Giant : TITAN
The Titans were a group of twelve older deities in Greek mythology. In the celebrated Battle of the Titans, they were overthrown by the Olympians, who were twelve younger gods.

19. Put on cargo : LADE
The verb “lade” meaning “to load” comes from an Old English word “hladan”. Lade also used to mean “to draw water” and indeed gave us our word “ladle”. So “lade” and “ladle” are close cousins.

20. Excessive sentimentality : SCHMALTZ
“Schmaltz” is an informal term used to describe things that are excessively sentimental. The word comes from the Yiddish “shmalts”, which means “melted fat”. Indeed, the modern German word for fat or grease is Schmaltz, and it can be used in the same figurative way in that language.

22. Kind of bomb since the 1940s : ATOMIC
There are two classes of nuclear weapons, both of which get the energy for the explosion from nuclear reactions. The first nuclear bombs developed, called atomic bombs (A-bombs), use fission reactions. In an atomic bomb, uranium nuclei are split into smaller nuclei with the release of an awful lot of energy in the process. The second class of nuclear weapons are fusion bombs. Fusion devices are also called thermonuclear weapons or hydrogen bombs (H-bombs). In a fusion reaction, the nuclei of hydrogen isotopes are fused together to form bigger nuclei, with the release of even greater amounts of energy than a fission reaction.

25. Hall & Oates, e.g. : DUO
Daryl Hall & John Oates are a pop music duo, most successful in the late seventies and early eighties. They had six number one hits, including the 1982 release “Maneater”.

26. Comedian’s gimmick : SCHTICK
A “schtick” is a routine, a bit, a piece of entertainment. It comes from the Yiddish “shtick” which has the same meaning, and derives from the Middle High German word “stücke”, the word for “piece”.

32. Astronomer Sagan : CARL
Carl Sagan was a brilliant astrophysicist and a great communicator. Sagan was famous for presenting obscure concepts about the cosmos in such a way that we mere mortals could appreciate. He also wrote the novel “Contact” which was adapted into a fascinating 1997 film of the same name starring Jodie Foster.

36. Habitual bungler : SCHLEMIEL
A “schlemiel“ is an awkward and clumsy person. “Shlemiel” is the Yiddish for “a bungler”, with the term coming from the German story “The Wonderful History of Peter Schlemihl”, published in 1813.

39. State whose panhandle touches Canada : IDAHO
The US state of Idaho has a panhandle that extends northwards between Washington and Montana, right up to the border with Canada. Across that border is the Canadian province of British Columbia.

47. Beatty of “Deliverance” : NED
Ned Beatty is probably best remembered for the rather disturbing “squeal like a pig” scene in the movie “Deliverance”. Beatty also earned an Academy Award nomination for Best Supporting Actor for his performance in the 1976 movie “Network”.

50. Provide coverage for through Prudential, say : INSURE
The Prudential Insurance company was started in 1875 as The Widows and Orphans Friendly Society. The company’s first product was simply burial insurance. Prudential has been using the very memorable Rock of Gibraltar logo since the 1890s.

52. Bagel spread : SCHMEAR
The word “schmear” comes from the Yiddish word “shmir” meaning “spread”. The phrase “the whole schmear” is a relatively recent one, dating back to around 1969 and coming from the world of business.

55. Fond du ___, Wis. : LAC
“Fond du lac” is French and translates as “bottom of the lake”, an apt name for the city of Fond du Lac, Wisconsin located at the foot of Lake Winnebago. If you like to play the lottery, you might want to stop off in Fond du Lac as there is a stretch of South Main Street called “Miracle Mile”. Back in 1993, someone bought a ticket there and won $100 million. Then in 2006, another store sold a ticket that won $209 million. These things always come in threes, so buy your tickets now …

57. Chat idly : SCHMOOZE
“To schmooze” is to chat intimately, a word that comes from the Yiddish “schmusen” meaning ‘to chat” .

63. Hudson Bay native : CREE
The Cree are one of the largest groups of Native Americans on the continent. In the US most of the Cree nation live in Montana on a reservation shared with the Ojibwe people. In Canada most of the Cree live in Manitoba.

Hudson Bay in northern Canada is the second largest bay in the world, after the Bay of Bengal. Hudson Bay was named by English explorers after Henry Hudson who explored the area in 1610 on his ship “Discovery”. Hudson’s crew mutinied during that voyage and set Hudson and his officers adrift in a small boat. It is presumed that the castaways didn’t survive for very long.

64. France’s longest river : LOIRE
The Loire River is so long that it drains a full one-fifth of France’s land mass. It rises in the southeast, in the Cevennes mountain range, then it heads north and then due east, emptying into the Bay of Biscay at the city of Nantes.

BFGoodrich is a brand of tire that is now owned by Michelin. The brand was originally developed by the Goodrich Corporation, which was founded in 1870 by Dr. Benjamin Franklin Goodrich.

67. Medicinal plant : SENNA
Sennas are used as purgatives and laxatives.

Down
1. Last Supper attendee : APOSTLE
Leonardo da Vinci’s famous mural “The Last Supper” can be seen on an end wall of the dining hall in the monastery of Santa Maria delle Grazie in Milan, Italy. If you want to see it in person, you have to make a reservation ahead of time, and once you get there, you’re only allowed 15 minutes viewing time. The mural is a very, very popular tourist attraction …

6. Justice Samuel : ALITO
Associate Justice Samuel Alito was nominated to the US Supreme Court by President George W. Bush. Alito is the second Italian-American to serve on the Supreme Court (Antonin Scalia was the first). Alito studied law at Yale and while in his final year he left the country for the first time in his life, heading to Italy to work on his thesis about the Italian legal system.

7. Big name in hotels or crackers : RITZ
César Ritz was a Swiss hotelier, who had a reputation for developing the most luxurious of accommodations and attracting the wealthiest clientèle. He opened the Hotel Ritz in Paris in 1898 and the second of his most famous hotels, the Ritz Hotel in London, in 1906. Ritz was lucky in his career, as before starting his own hotel chain, he had been dismissed from the Savoy Hotel in London, implicated in the disappearance of a substantial amount of wine and spirits.

I’ve always liked Ritz crackers. They’ve been around since 1934 when they were introduced by Nabisco. The name Ritz was chosen because the marketing folks felt that the association with Ritz-Carlton would evoke images of wealth and the high life.

8. Little ___, who did the Loco-Motion : EVA
Carole King and her longtime partner Gerry Goffin have been writing hit songs since the early sixties. Carole and Gerry had a babysitter, one Eva Narcissus Boyd, who was always bopping around the house in an unusual dance style. They wrote a song about her dance and they called it “The Loco-Motion”. Then they gave it to the babysitter to record. Ms. Boyd chose as a stage name a character in “Uncle Tom’s Cabin” called Little Eva …

9. Dennis, to Mr. Wilson : MENACE
“Dennis the Menace” is a comic strip that first appeared in 1951, originally drawn by Hank Ketcham. The strip made the jump over the years from the newspaper to television and the silver screen. Dennis’s full name is Dennis Mitchell, and his parents are Henry and Alice (Johnson) Mitchell. Dennis’s nemesis is his neighbor, Mister George Everett Wilson. Hank Ketcham drew his inspiration for the story from his real life. When he introduced the strip he had a 4-year-old son called Dennis, and a wife named Alice.

21. Commercial suffix with Gator : -ADE
Gatorade was developed at the University of Florida by a team of researchers at the request of the school’s football team. And so, Gatorade is named after the Gators football team.

26. Alabama march city : SELMA
The Bloody Sunday march took place between Selma and Montgomery, Alabama on 7 March 1965. The 600 marchers involved were protesting the intimidation of African-Americans registering to vote. When the marchers reached Dallas County, Alabama they encountered a line of state troopers reinforced by white males who had been deputized that morning to help keep the peace. Violence broke out with 17 marchers ending up in hospital, one nearly dying. Because the disturbance was widely covered by television cameras, the civil rights movement picked up a lot of support that day.

35. Liechtenstein’s locale : ALPS
Liechtenstein is a tiny country with an area of just over 61 square miles, located in the Alps between Switzerland and Austria. Liechtenstein has the highest gross domestic product per person in the world. The country is a winter sports haven attracting lots of visitors, and is also a tax haven with a strong financial center. There are actually more registered companies in Liechtenstein than there are citizens!

37. Halley’s ___ : COMET
Edmond Halley was an English astronomer who lived at the turn of 17th and 18th centuries. In 1705 he declared that comet sightings recorded in 1456, 1531, 1607 and 1682 were in fact observations of the same comet returning to fly by Earth at regular intervals. He predicted that this comet would return in 1758, and he was right, and so the comet was named after him: Halley’s Comet. Sadly, Halley didn’t live long enough to see his prediction come true.

44. Laudatory tributes upon someone’s passing : EULOGIA
A eulogy is a speech or piece of writing that praises someone who has recently passed away or who is retiring. “Eulogy” comes from the Greek word “eulogia” meaning “praise”.

51. “Apocalypse Now” setting, informally : NAM
The epic war drama “Apocalypse Now” was released in 1979 and starred Martin Sheen as Captain Willard and Marlon Brando as Colonel Kurtz. The premise of the film is that both Willard and Kurtz are special ops officers, with Willard sent into the jungle to assassinate Kurtz who has “gone rogue”. The film is notorious for the trouble that director Francis Ford Coppola had completing the shoot. Brando turned up on set grossly overweight (to play a special ops guy!), and Martin Sheen had a heart attack during filming.