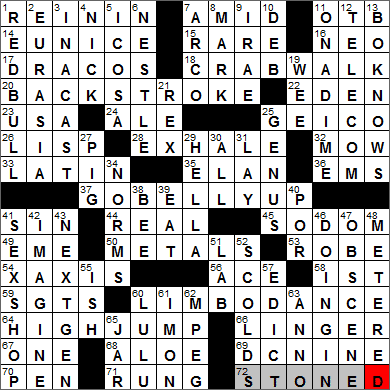 CROSSWORD SETTER: Peter Broda
THEME: On Your Back … each of today’s themed answers is an activity done with the belly facing upwards:

18A. Proceed on all fours, in a way : CRAB WALK
20A. Butterfly alternative : BACKSTROKE
60A. Caribbean party event : LIMBO DANCE
64A. Decathlon event : HIGH JUMP

Today’s Wiki-est, Amazonian Googlies
Across
11. Handicapper’s spot, for short : OTB
Off-Track Betting (OTB) is the legal gambling that takes place on horse races outside of a race track. A betting parlor can be referred to as an OTB.

14. One of the Shrivers : EUNICE
Eunice Kennedy was the sister President John F. Kennedy. Eunice married Sargent Shriver, the running mate of George McGovern in the 1972 presidential race (which was won by the incumbent President Nixon).

15. Like a day in June, according to Lowell : RARE
James Russell Lowell was a Romantic poet from Massachusetts. Lowell was also known as one of the Fireside Poets, a group of New England poets who used a simpler style to make their work accessible to the general populace. One his more famous works is the poem that starts, “What is so rare as a day in June?”

16. Prefix with platonic : NEO-
Neoplatonists were a school of mystical philosophers from the 3rd century and after who based their work on the teachings of Plato and some of his earlier followers.

25. Allstate competitor : GEICO
GEICO was founded in 1936 with a very specific mission, to provide auto insurance for employees of the federal government and their families, hence the name Government Employees Insurance Company (GEICO). GEICO is a private company, despite the word “government” in its name. The founders’ idea was to focus on government employees as they believed such a group represented a lower risk profile than the rest of the population. Nowadays any qualifying person can take out a policy with GEICO.

35. Panache : ELAN
Our word “élan” was imported from French, in which language the word has a similar meaning to ours i.e “style” or “flair”.

Our word “ambulance” originated in the French term “hôpital ambulant” meaning field hospital (literally “walking hospital”). In the 1850s, the term started to be used for a vehicle transporting the wounded from the battlefield, leading to our “ambulance”.

In the US Bankruptcy Code, Chapter 11 allows for a company or individual to reorganize affairs in the event that debts become so cumbersome that they cannot be cleared. Should the reorganization be unsuccessful, then Chapter 7 of the code might apply, which covers the sale of assets and distribution of proceeds to creditors.

45. Gomorrah’s sister city : SODOM
The two cities of Sodom and Gomorrah, as well as Admah and Zeboim, were destroyed by God for the sins of their inhabitants, according to the Bible. The name Sodom has become a metaphor for vice and homosexuality, and gives us our word “sodomy”.

49. Suffix with lex- : -EME
“Lexeme” is a term from linguistics. A lexeme is a fundamental unit in a language, a set of forms of a particular word e.g. the lexeme “find” contains the forms “find, finds, found, finding.”

53. Cabana wear : ROBE
Our word “cabana” comes from the Spanish “cabaña”, the word for a small hut or a cabin.

56. It may be high or low in blackjack : ACE
The game of “twenty-one” was first referred to in a book by Cervantes, the author famous for writing “Don Quixote”. He called the game “ventiuna” (Spanish for “twenty-one”). Cervantes wrote his story just after the year 1600, so the game has been around at least since then. Twenty-one came to the US but it wasn’t all that popular so bonus payments were introduced to create more interest. One of the more attractive bonuses was a ten-to-one payout to a player who was dealt an ace of spades and a black jack. This bonus led to the game adopting the moniker “Blackjack”.

60. Caribbean party event : LIMBO DANCE
The limbo dance originated on the island of Trinidad in the Caribbean. The name “limbo” is an alteration of our word “limber”, which isn’t surprising given what one has to do to get under that bar!

64. Decathlon event : HIGH JUMP
The decathlon event is a track and field competition, with the name “decathlon” coming from the Greek “deka” (ten) and “athlos” (contest). The ten events in the men’s decathlon are:

69. Old McDonnell Douglas aircraft : DC NINE
The McDonnell Douglas DC-9 made its maiden flight in 1965, and was produced until 2006. It was designed for landing and takeoff in smaller airports. With that in mind, the aircraft’s two engines were mounted on the rear of the fuselage so that the wings were left “clean”, with flaps running the full length creating more lift and so helping to lower takeoff and approach speeds.

72. Like Cheech & Chong, in most of their movies : STONED
The comedy duo Cheech & Chong are made up of Richard “Cheech” Marin and Tommy Chong. Cheech and Chong worked together from 1971 to 1985, and have been back working together again since 2002. A lot of the duos comedy was based on their being stoned, on cannabis.

Down
1. Popular energy drink : RED BULL
Red Bull is a drink from Austria, created in 1987. Red Bull is the most popular “energy drink” in the world. There was controversy in 2009 when it was discovered that Red Bull imported from Austria contained trace amounts of cocaine.

2. Landmass that spans over 180 degrees of longitude : EURASIA
Eurasia covers 36% of the land mass on the planet, and is home to 71% of its population.

4. “Jolly old” saint : NICK
Saint Nicholas of Myra is the inspiration for Santa Claus. Nicholas was the Bishop of Myra (now in modern-day Turkey) during the 4th century AD, and was known for being generous to the poor. Centuries after he died, his remains were desecrated by Italian sailors and moved to Bari in Italy. One legend has it that the relics were moved again centuries later and reburied in the grounds of Jerpoint Abbey in Co. Kilkenny in Ireland, where you can visit the grave today. I choose to believe that Santa Claus’s relics are indeed buried in Ireland …

5. Twenty: Prefix : ICOSA-
The prefix “icosa-” is most often seen in the word “icosahedron”, which describes a polyhedron with 20 faces shaped as equilateral triangles. “Icosa-” comes from the Greek “eikosi” meaning “twenty”.

7. With the bow, in music : ARCO
“Arco” is a musical direction instructing a string player to return to normal bowing technique after a passage played using some other technique (perhaps pizzicato).

9. “Dies ___” : IRAE
“Dies Irae” is Latin for “Day of Wrath”. It is the name of a famous melody in Gregorian Chant, one that is often used as part of the Roman Catholic Requiem Mass.

10. Girl with a ball : DEB
Deb is short for “debutante”, which translates from French as “female beginner”.

13. Onetime catchphrase for athlete Jackson : BO KNOWS
Bo Jackson is a former professional baseball and football player. Jackson was named All-Star in both sports, the first athlete to be so honored. Bo Jackson worked alongside R&B guitarist in a famous “Bo Know” advertising campaign for Nike.

25. The “Homo” in Homo sapiens : GENUS
Biological classification is a method used to group organisms by biological type. The method uses a hierarchy of nested classes, with an organism being classified with reference to evolutionary traits. The major taxonomic ranks used are:

30. The whole enchilada : ALL
“Enchilada” is the past participle of the Spanish word “enchilar” meaning “to add chile pepper to”. An enchilada is a basically a corn tortilla rolled around some filling and then covered in chili pepper sauce.

38. Scripps-sponsored event for kids : BEE
The Scripps National Spelling Bee is sponsored and managed by the E. W. Scripps Company.

42. 1971 hit with the lyric “You may say I’m a dreamer” : IMAGINE
John Lennon’s magnus opus is his song “Imagine”, released in 1971. “Imagine” was quite successful at the time of its release, but sadly, it only became a number one hit when Lennon was murdered in 1980. According to Lennon, the message behind the song is very simple: a world without countries or religion would be a peaceful place.

60. Ripsnorter : LULU
“Ripsnorter” is a slang term for a person or thing noted for strength to excellence, a “lulu”.

62. Compressed video file format : MPEG
The Moving Picture Experts Group (MPEG) was established in 1988 to set standards for audio and video compression. The standards they’ve come up with use the acronym MPEG.

63. The “A” in A.D. : ANNO
The designations Anno Domini (AD, “year of Our Lord”) and Before Christ (BC) are found in the Julian and Gregorian calendars. The dividing point between AD and BC is the year of the conception of Jesus, with AD 1 following 1 BC without a year “0” in between. The AD/BC scheme dates back to AD 525, and gained wide acceptance soon after AD 800. Nowadays a modified version has become popular, with CE (Common/Christian Era) used to replace AD, and BCE (Before the Common/Christian Era) used to replace BC.