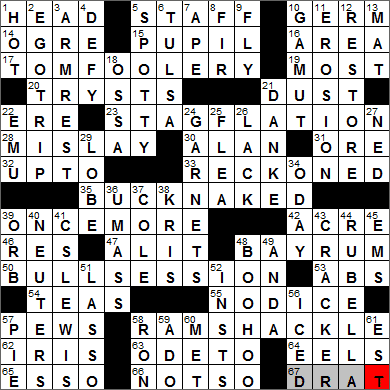 CROSSWORD SETTER: Robert Fisher
THEME: Males! Animals! … each of today’s themed answers starts with the term for a male animal:

17A. Prankish activity : TOMFOOLERY
23A. Double-whammy economic condition : STAGFLATION
35A. Without a stitch on : BUCK NAKED
50A. Impromptu, wide-ranging conversation : BULL SESSION
58A. Shoddy and unsturdy : RAMSHACKLE

Today’s Wiki-est, Amazonian Googlies
Across
1. Noggin : HEAD
A slang term for a “head” might be “dome” or “noggin”.

15. Part of the eye : PUPIL
The pupil of the eye is the “hole” located in the center of the iris through which light enters the retina. The term “pupil” came into English via French from the latin “pupilla”, which is the diminutive form of “pupa” meaning “girl, doll”. The term came about due to the tiny doll-like image that one can see of oneself when looking into the center of another’s eyes.

17. Prankish activity : TOMFOOLERY
In Middle English, in the middle of the 14th century, a mentally deficient man would be called a Thom Foole, sort of a nickname. We retain the name today in our word “tomfoolery” meaning “clowning around”.

20. No-tell motel get-togethers : TRYSTS
In its most general sense, a tryst is a meeting at an agreed time and place. More usually we consider a tryst to be a prearranged meeting between lovers. The term comes from the Old French “triste”, a waiting place designated when hunting.

23. Double-whammy economic condition : STAGFLATION
Stagflation is a portmanteau word, as one might expect, formed from the words stagnation and inflation. Stagflation is the condition when a country’s inflation rate is high, and at the same time unemployment is high (i.e. the economy is stagnating). So our recent economic woes wouldn’t fall into the category of stagflation, because even though the unemployment rate has climbed (the economy is stagnating), inflation remains under control and relatively low.

30. The “A” of Chester A. Arthur : ALAN
Chester Arthur was the 21st President of the US, and came to power after the assassination of James Garfield in 1881. President Arthur was known to be socially adept, and was very conscious of his role in society. He was always immaculately attired, apparently even changing his pants several times in a day. He was called “Chet” by family and friends, and sometimes answered to his middle name, Alan. However, he insisted that Alan be pronounced with the stress on the second syllable, Al-an.

35. Without a stitch on : BUCK NAKED
Apparently the term “buck-naked” is just a polite way of saying “butt-naked”, and has nothing to do with a buck at all.

42. Farm unit : ACRE
At one time, an acre was defined as the amount of land a yoke of oxen could plow in a day. This was more precisely defined as a strip of land one furlong long (660 feet) and one chain wide (66 feet). The word “furlong” is actually derived from the Old English words meaning “furrow long”, the length of the furrow plowed by the oxen.

46. Hi-___ graphics : RES
In the digital world, resolution of a display, television, image etc. is defined by the number of pixels that can be displayed in a standard area (say a square inch). The emphasis today is on producing larger area displays/televisions, i.e increasing the number of pixels simply by increasing the size of the screen. In the past couple of decades the emphasis was on adding more pixels within the same screen size to increase resolution. This would just be wasted effort these days as further increases in resolution cannot be perceived by the eye. Now that TVs are capable of displaying such high resolutions, broadcasters are responding by producing a video signal of higher resolution that they call high-definition television, HDTV.

48. Men’s grooming scent : BAY RUM
Bay rum is a distillate from rum and the leaves of the Indian bay tree that is used as a cologne or aftershave. Bay rum has been used since the 16th century, initially by sailors in the West Indies who found that it masked the natural “scent” they exuded after months at sea. Initially it was just the dry leaves that was used on the skin, and then the leaves were soaked in rum to extract the essential oils.

54. Oolong and Earl Grey : TEAS
The name for the Chinese tea “oolong” translates into English as “black dragon”.

62. Part of the eye : IRIS
The iris is the colored part of the eye with an aperture in the center that can open or close depending on the level of light hitting the eye.

63. “___ a Nightingale” : ODE TO
The poet John Keats is famous for writing a whole series of beautiful odes. The most renowned are the so-called “1819 Odes”, a collection from the year 1819 that includes famous poems such as “Ode on a Grecian Urn”, “Ode to a Nightingale” and “Ode to Psyche”.

65. Bygone U.S. gas brand : ESSO
The brand name Esso has its roots in the old Standard Oil company as it uses the initial letters of “Standard” and “Oil” (ESS-O). The Esso brand was replaced by Exxon in the US, but ESSO is still used in many other countries.

Down
6. Oklahoma oil city : TULSA
Tulsa is the second-largest city in the state of Oklahoma (after Oklahoma City). Tulsa started out as a settlement established by the Lochapoka and Creek Native American tribes in 1836. These early settlers called their new home “Tallasi” meaning “old town”, and this name morphed into “Tulsa” that we use today.

10. Full range : GAMUT
In medieval times, the musical scale was denoted by the notes “ut, re, mi, fa, sol, la”. The term “gamma ut” was used to describe the whole scale, and this was shorted to “gamut”. By the 1620s, “gamut” was being used to mean the entire range of anything, the whole gamut.

18. Greek peak : OSSA
Mt. Ossa in Greece is located between Mt. Pelion in the south, and the famed Mt. Olympus in the north. Mount Ossa is also known as Kissavos.

25. One nipping Nipper, maybe : FLEA
Nipper is the name of the dog that appeared in the RCA logo. Nipper was a real dog, actually from England. His owner, Francis Barraud, made a painting of Nipper listening to a gramophone. Barraud then approached several gramophone manufacturers in the hope they would be interested in using the image for advertising. Nipper’s likeness was indeed picked up, and around that time it was Barraud himself who came up with the slogan “His Master’s Voice”.

27. Flanders of “The Simpsons” : NED
Ned Flanders lives next door to Homer on TV’s “The Simpsons”. Ned is voiced by actor Harry Shearer and has been around since the very first episode aired in 1989.

34. Jazz chanteuse Anita : O’DAY
Anita O’Day was the stage name of the jazz singer Anita Colton. O’Day had problems with heroin and alcohol addiction leading to erratic behavior and earning her the nickname “The Jezebel of Jazz”.

36. Amherst school, informally : UMASS
The University of Massachusetts Amherst (UMass) is the largest public university in New England. UMass was founded back in 1863, although it took a while to get the school into service. Construction work was delayed and the college went through two presidents before William S. Clark took charge. He cracked the whip, completed the construction and enrolled the first students in the same year that he took over the reins, in 1867. As a result, although Clark was the third President of UMass, he is regarded by most as the school’s founding father.

37. ___ slaw : COLE
The term “coleslaw” is an Anglicized version of the Dutch name “koolsla”, which in itself is a shortened form of “Koolsalade” meaning “cabbage salad”.

38. ___ Kringle : KRIS
“Kris Kringle” is the name sometimes used here in North America for Santa Claus. “Kris Kringle” is an anglicised form of “Christkind”, the bringer of gifts in many other countries including Austria, the Czech Republic and parts of Germany. “Christkind” is German for “Christ-child”.

41. “The Lion, the Witch and the Wardrobe” writer : C S LEWIS
Irishman C. S. Lewis moved to Britain after serving in the British Army in WWI. A man of many achievements, he is perhaps today best remembered for his series of novels for children called “The Chronicles of Narnia” (which includes “The Lion, the Witch and the Wardrobe”). He also wrote the “The Four Loves”, a non-fiction work exploring the nature of love from a Christian perspective.

44. German measles : RUBELLA
German measles is a diseased caused by the rubella virus, with the name “rubella” coming from the Latin for “little red” (a reference to the red rash symptom). The disease is known as “German” measles because it was first described by physicians in Germany in the mid-1900s. Rubella is most serious for pregnant women as it can cause spontaneous abortion or cause the baby to be born with life-threatening organ disorders. When I was growing up in Ireland, I remember my brother and I catching German measles, and then having young girls from the neighborhood paraded through the house. The hope was that they would catch the disease and acquire the resulting immunity before they entered their childbearing years. Most children in North America receive a German measles vaccine as part of the MMR vaccine.

57. ___ à la mode : PIE
In French, “à la mode” simply means “fashionable”. In America, the term has come to describe a way of serving pie, usually with ice cream, or as I recall from when I lived in Upstate New York, with cheese.