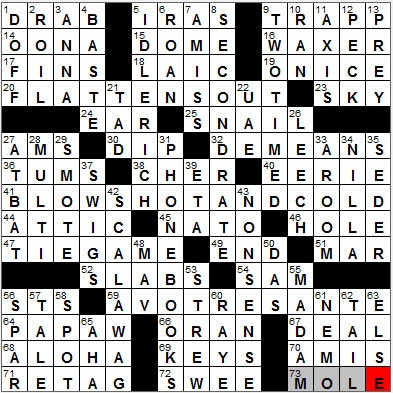 CROSSWORD SETTER: Ed Sessa
THEME: Breakfast … At first sight, all of today’s themed clues seem to point to breakfast items, and then we discover that the answers have nothing do with breakfast at all:

Today’s Wiki-est, Amazonian Googlies
Across
9. Von ___ family (“The Sound of Music” group) : TRAPP
“The Sound of Music” is a Rodgers and Hammerstein musical made into a celebrated movie in 1965 starring Julie Andrews and Christopher Plummer. The musical is based on “The Story of the Trapp Family Singers”, a memoir by Maria von Trapp. The von Trapp family ended up in Stowe, Vermont after the war and one family descended from the Vermont von Trapps lives here in the same town in which I reside in California.

14. Wife of Charlie Chaplin : OONA
Oona O’Neill dated J. D. Salinger and Orson Welles in her teens, but ended up marrying Charlie Chaplin. Oona was still pretty young when she married Chaplin, much to the dismay of her famous father, the playwright Eugene O’Neill. After the marriage Eugene disowned Oona as he was pretty upset about 54-year-old Chaplin marrying his 18-year-old daughter.

18. Of a church flock : LAIC
Anything described is laic (or laical) is related to the laity, those members of the church who are not clergy. The term “laic” ultimately comes from the Greek “laikos” meaning “of the people”.

23. Firmament : SKY
“Firmament” is an old term for the sky or the heavens. Back then the sky was considered to be “firm”, a solid dome covering the Earth.

25. Escargot : SNAIL
In order to eat snails, apparently they have to be “purged” before killing them. That means starving them or feeding them on something “wholesome” for several days before cooking them up. Ugh …

30. Salsa or guacamole : DIP
“Salsa” is simply the Spanish for “sauce”.

Guacamole is one of my favorite dishes, and is made by mashing avocados and perhaps adding the likes of tomato, onion and lime juice. The guacamole recipe dates back as early as the 16th century, to the time of the Aztecs. “Guacamole” translates as “avocado sauce”.

36. Rolaids competitor : TUMS
The main ingredient in Tums antacid, made by GlaxoSmithKline, is calcium carbonate. Tums have been on the market since 1930. If you want to save a few pennies, Target brand antacid is identical to Tums, so I hear …

38. Chaz’s mother : CHER
Chaz Bono is the only child of the singers Sonny and Cher (although they both have children from other marriages). Chaz was named Chastity Sun Bono at birth and told her parents at the age of 18 that she was a lesbian. More recently Bono underwent gender reassignment surgery, and Chastity has legally changed his name to Chaz.

45. Western alliance since 1949 : NATO
NATO is the North Atlantic Treaty Organization (or OTAN in French, “l’Organisation du Traité de l’Atlantique Nord”). NATO was founded not long after WWII in 1949 and is headquartered in Brussels, Belgium. The first NATO Secretary General was Lord Ismay, Winston Churchill’s chief military assistant during WWII. Famously, Lord Ismay said the goal of NATO was “to keep the Russians out, the Americans in, and the Germans down.”

54. Walton of Walmart : SAM
Sam Walton used to work for Penney’s in Des Moines, Iowa, before founding the Walmart empire.

59. French toast : A VOTRE SANTE
“À votre santé” is French for “to your health”. Cheers!

64. Bananalike fruit : PAPAW
The papaw (also “pawpaw”) tree is native to North America and has a fruit that looks similar to a papaya. Papaw probably gets its name from the word papaya, but papaw and papaya are two distinct species.

66. Algerian port : ORAN
Oran lies on the Algerian coast, and is famous for being the port where the French Navy was largely destroyed by the British during WWII in order to avoid the French vessels falling into the hands of Nazi Germany after France surrendered. This decisive and unexpected unilateral action by the British sent a very strong message around the world that Britain was willing to fight alone against the axis powers if necessary.

68. Wahine’s greeting : ALOHA
The Hawaiian word “Aloha” has many meanings in English: affection, love, peace, compassion and mercy. More recently “aloha” has come to mean “hello” and “goodbye”, but only since the mid-1800s.

“Wahine” is the word for “woman”, in both Hawaiian and Maori.

70. Bordeaux buddies : AMIS
Bordeaux is perhaps the wine producing capital of the world. Wine has been produced in the area since the eighth century. Bordeaux has an administrative history too. During WWII, the French government relocated from Paris to the port city of Bordeaux when it became clear that Paris was soon to fall to the Germans. After the German’s took France, the capital was famously moved to Vichy.

72. Popeye’s ___’ Pea : SWEE
Originally Popeye used the nickname “swee’pea” to address his girlfriend Olive Oyl. Then along comes a baby, found on Popeye’s doorstep. Popeye adopts the little guy and raises him, calling him “Swee’Pea”.

73. Distinctive Marilyn Monroe facial feature : MOLE
Marilyn Monroe was born in 1926 in LA County Hospital, the child of Gladys Pearl Baker. The young girl was given the name of Norma Jeane Mortenson on her birth certificate, but her mother changed this to Norma Jeane Baker almost immediately. She and her estranged husband, Martin Edward Mortensen, had separated before Baker became pregnant so it is suggested that the Mortensen name was used to just to give Norma Jeane “legitimacy”. Norma Jeane married a Jim Dougherty when she 16 years old, and took his name to become Norma Jeane Dougherty in 1932. During WWII she was discovered by a photographer and became quite a successful model. The modelling earned her a screen test, at which time it was suggested that Norma Jean change her name yet again. The first name chosen for her by studio executives was Carole Lind (after Carole Lombard and Jenny Lind), but then Norma Jeane chose “Jeane Monroe” for herself, using her mother’s maiden name. It didn’t take long before the studio intervened again, suggesting that they had too many “Jeans” already. The name Marilyn Monroe was floated as it had a nice ring to it. Along with the new name, Marilyn changed from a brunette to a blonde and a star was born …

Down
1. Remove, as a hat : DOFF
One doffs one’s hat, usually as a mark of respect. To doff is to take off, with “doff” being a contraction of “do off”.

3. She was the “I” in “The King and I” : ANNA
“The King and I” is a Rodgers and Hammerstein musical based on a book by Margaret Landon called “Anna and the King of Siam” first published in 1944. Landon’s book is based on a true story, told in the memoirs of Anna Leonowens. Leonowens was the governess of the children of King Mongkut of Siam in the 1860s, and she also taught the king’s wives.

6. Horse color : ROAN
A roan horse has an even mixture of white and colored hairs on the body with the head, lower legs, mane and tail having a more solid color.

12. Amount for Peter Piper : PECK
The earliest written version of the “Peter Piper” nursery rhyme and tongue twister dates back to 1813 London:

22. Dubai’s federation: Abbr. : UAE
The United Arab Emirates (UAE) is a federation of seven emirates (states) in the Middle East. Included in the seven are Abu Dhabi and Dubai, with the city of Abu Dhabi being the UAE capital and cultural center.

33. Virginia Woolf’s “___ of One’s Own” : A ROOM
Virginia Woolf was an English author active in the period between the two World Wars. Woolf’s most famous novels were “Mrs. Dalloway”, “To the Lighthouse” and “Orlando”. She also wrote a long essay entitled “A Room of One’s Own” in which she states “A woman must have money and a room of her own if she is to write fiction.”

34. Nabisco’s ___ wafers : NILLA
As one might expect, Nilla is a shortened from of “vanilla”. However, you won’t find any vanilla in Nilla cookies or wafers. They have always been flavored with vanillin, synthetic vanilla. Is nothing sacred …?

35. Passover supper : SEDER
The Passover Seder is a ritual feast that marks the beginning of the Jewish Passover holiday, celebrating the liberation of the Israelites from slavery in Egypt. One of the traditions at the meal is that the youngest child at the table asks “The Four Questions”, all relating to why this night is different from all other nights in the year:

39. Greek vowel : ETA
Eta is the seventh letter of the Greek alphabet, and is a forerunner of our Latin character “H”.

42. Scamp : SCALAWAG
Scallywag is actually a term we use in Ireland to describe a rogue, usually one that is harmless, and it comes from the Irish word “sgaileog” meaning a farm servant. The American use of “scalawag” as a rogue was originally borrowed as a nickname for southern white people that supported reconstruction after the Civil War.

48. Dallas cager, for short : MAV
The Mavericks is the name of the NBA franchise in Dallas, Texas. The team was founded in 1980, and the Mavericks name was chosen by fan votes. The choice of “Mavericks” was prompted by the fact that the actor James Garner was a part-owner of the team, and Garner of course played the title role in the “Maverick” television series.

In the early days of basketball, when a ball went out of bounds possession was awarded to the player who first retrieved the ball. This led to mad scuffles off the court, often involving spectators. As the game became more organized courts were routinely “caged”, largely because of this out of bounds rule, to limit interaction with the crowd. It’s because of these cages that basketball players are sometimes referred to today as “cagers”.

50. “Law & Order” figs. : DAS
“Law & Order” ran for many, many years on NBC, from 1990 to 2010. “Law & Order” is a police drama that spawned a huge franchise of shows both here in the US and overseas. I am probably a bit biased, but my favorite is the trans-Atlantic version shown on BBC America called “Law & Order: UK”.

One of my favorite words is “Aibohphobia”, although it doesn’t appear in the dictionary and is a joke term. It is a great way to describe a fear of palindromes, by creating a palindrome out of the suffix “-phobia”.

57. Scheherazade offering : TALE
Scheherazade was a Persian queen of legend, and the storyteller of the wonderful “One Thousand and One Nights”.

58. Good name for a Dalmatian : SPOT
The Dalmatian breed of dog originated in Dalmatia, in the Republic of Croatia. Here in the US, Dalmatians are known as “firehouse dogs”. This association dates back to the use of Dalmatians in firehouses to guard the valuable horses that pulled the fire engines.

60. Funny Martha of old TV : RAYE
Martha Raye was a comic actress as well as a singer. Strangely enough, Raye was famous for the size of her mouth, something that she used to her own advantage. As her nickname was “The Big Mouth”, she made a little money appearing in commercials for the Polident denture cleaner in the eighties. Her line was, “So take it from the Big Mouth: new Polident Green gets tough stains clean!”

61. Pixar’s “Finding ___” : NEMO
“Finding Nemo” is a 2003 animated blockbuster from Pixar. The film was the winner of the Oscar that year for Best Animated Feature. Believe it or not, “Finding Nemo” is the best-selling DVD of all time and, until 2010’s “Toy Story 3”, it was the highest-grossing, G-rated movie at the box office.