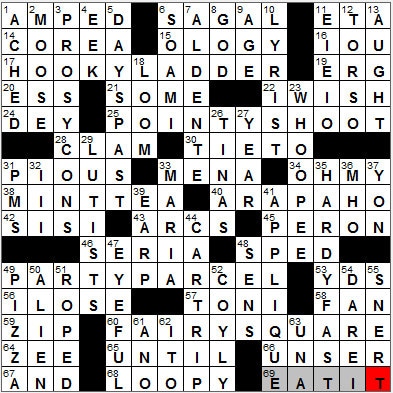 CROSSWORD SETTER: Joe DiPietro
THEME: And Spanish … each of the theme answers is a noted expression with the English “and” replaced by the Spanish “and” i.e. “y”:

Today’s Wiki-est, Amazonian Googlies
Across
6. Katey of “Married … With Children” : SAGAL
Katey Sagal played Peggy Bundy on “Married … with Children”. Later she took over as star of the show “8 Simple Rules” in the middle of its run, when John Ritter passed away unexpectedly in 2003.

14. Jazzman Chick : COREA
Chick Corea is an American jazz pianist. Corea is noted for his work in the area of jazz fusion, as well as for his promotion of Scientology.

17. Aid for skipping out of school? : HOOKY LADDER (from “hook-and-ladder”)
A hook-and-ladder truck is a specialized type of firefighting apparatus. It is an extending ladder on a turntable pulled behind a semi-trailer. There are two drivers on board, one controlling the front wheels and one the back wheels. A hook-and-ladder truck is particularly useful in downtown areas of large cities as the long ladder helps with access to tall buildings and the independent rear steering adds maneuverability for driving through narrow streets.

19. Physics unit : ERG
An erg is a unit of energy or mechanical work. “Erg” comes from the Greek word “ergon” meaning “work”. A dyne is a unit of force. The name “dyne” comes from the Greek “dynamis” meaning “power, force”. Ergs and dynes are related to each other in that one erg is the amount of energy needed to move a force of one dyne over a distance of one centimeter.

28. Blabber’s opposite : CLAM
Someone who blabs speaks out quite freely, and someone who clams up keeps his or her mouth shut.

33. Actress Suvari, co-star of “American Pie” : MENA
Mena Suvari’s most famous role to date is the “beauty” in the 1999 movie “American Beauty”. In the film, Suvari plays the teenage girl with whom the Kevin Spacey character becomes infatuated.

40. Allies of the Cheyenne : ARAPAHO
The Arapaho tribe lived on the eastern plains of Colorado and Wyoming. The Arapaho traditionally wintered in small camps in the foothills of the Rockies, and then relocated to plains in the spring where they hunted buffalo that were gathering to give birth to their young.

45. 1950s coup victim : PERON
Nowadays, President Juan Perón of Argentina is perhaps less well-known than his second wife, Eva Perón of “Evita” fame. Juan and Eva Perón were overthrown in a military coup in 1955, although Juan Perón was returned to power in 1973 when he served for only nine months before he passed away. Juan was succeeded in office by his third wife, Isabel Perón.

57. Novelist Morrison : TONI
Toni Morrison won the Nobel Prize for Literature in 1993. Amongst other things, Morrison is noted for coining the phrase, “our first black President”, a reference to President Bill Clinton.

64. Final letter : ZEE
The letter named “zed” has been around since about 1400, and derives from the Greek letter zeta. The spelling and pronunciation of “zee” used in America today first popped up in the 1670s.

66. Auto-racing family name : UNSER
The Unser family seems to have racing cars in its blood. Al Unser, Sr. won the Indy 500 on four occasions. Al’s brother Jerry was the first of the Unsers to compete at Indianapolis. Al’s other brother Bobby, won the Indy three times. Al’s son, Al Junior, won the Indy twice. Al Junior’s son is also a racing driver who competes at the Indy Speedway.

69. First Top 40 hit for Weird Al Yankovic : EAT IT
Weird Al Yankovich is famous for his parodies of songs like “Eat It”, his parody of Michael Jackson’s “Beat It”. Yankovic also takes a lot of popular songs and rearranges them as polkas, such as “Bohemian Polka” which is based on Queen’s “Bohemian Rhapsody”.

Down
3. Prisoners who write tediously? : PROSY CONS (from “pros and cons”)
Something that is “prosy” lacks impact and is dry, prosaic in fact.

4. Reggae’s ___-A-Mouse : EEK
Eek-A-Mouse is a Jamaican reggae artist, born Ripton Hylton. Hylton took the name “Eek-A-Mouse” from a racehorse, one on which he frequently placed bets.

7. Spaghetti specification : AL DENTE
The Italian expression “al dente” literally means “to the tooth” or “to the bite” and is used to describe not only pasta, but also vegetables that are cooked so that they are tender yet still crisp.

10. Apollo, for one, musically speaking : LYRIST
A lyre is a stringed instrument most closely associated with Ancient Greece, and with the gods Hermes and Apollo in particular. According to myth, Hermes slaughtered a cow from a sacred herd belonging to Apollo and offered it to the gods but kept the entrails. Hermes used the entrails to create the first lyre. Apollo liked the sound from the lyre and agreed to accept it as a trade for his herd of cattle.

11. Children’s song refrain : E-I-E-I-O
There was an American version of the English children’s song “Old MacDonald Had a Farm” (E-I-E-I-O), that was around in the days of WWI. The first line of the US version went “Old Macdougal had a farm, in Ohio-i-o”. I think that the “Old MacDougal” version eventually bit the dust and “Old MacDonald” won out in American nursery schools.

12. Arms flank it : TORSO
“Torso” (plural “torsi”) is an Italian word meaning the “trunk of a statue”, a word that we imported into English.

26. “Tony n’ ___ Wedding” : TINA’S
“Tony n’ Tina’s Wedding” is described as “environmental theater” as there is a lot of audience participation. The play is basically an Italian-American wedding and reception, with the audience playing the guests.

31. U.K. V.I.P.’s : PMS
The Prime Minister (PM) of the UK has powers equivalent to the US President, but with major differences. The office of prime minister exists by convention and not by any constitution. The convention is that the King or Queen of England appoints as PM the person most likely to have the confidence of the House of Commons, and that person is usually the leader of the party with the most seats in the Commons. There is no term limit and the PM serves “at his/her majesty’s pleasure”. The first UK PM wasn’t actually called “Prime Minister” and the person first attributed with the equivalent powers was Sir Robert Walpole, the First Lord of the Treasury in 1721. The incumbent PM is David Cameron, the leader of the Conservative Party.

32. First Super Bowl that was actually called a Super Bowl : III
Super Bowl I was played in January 1967 between the Green Bay Packers and the Kansas City Chiefs. The Packers emerged victorious in a game with a score of 35-10. That game was officially known as the AFL-NFL Championship Game, as the name “Super Bowl” wasn’t applied until two seasons later. That “first” Super Bowl is now known as Super Bowl III and was played between the New York Jets and the Baltimore Colts. The Jets came out on top.

33. Santa ___ : MARIA
When Columbus made his famous voyage of discovery, the largest of his three ships was the Santa Maria. The Santa Maria ran aground on the coast of Hispaniola on Christmas Day in 1492 and was lost. 39 of Columbus’s men were left behind with the permission of the locals. These men stripped the timbers from the Santa Maria and used them to build a settlement they called La Navidad (Spanish for “Christmas”). La Navidad is now the modern town of Môle-Saint-Nicolas in the Republic of Haiti.

The famous Earp brothers of the Wild West were Wyatt, Virgil and Morgan. All three brothers participated in what has to be the most celebrated gunfight in the history of the Old West, the Gunfight at the O.K. Corral in Tombstone, Arizona. Strangely enough, the fight didn’t happen at the O.K. Corral, but took place six doors down the street in a vacant lot next to a photography studio.

49. Something delivered in a box : PIZZA
Pizza was invented in Naples where it has a long tradition that goes back to Ancient Rome. During an 1889 visit to Naples, Queen Margherita of Savoy was served a special pizza that was created with toppings designed to mimic the colors of the Italian flag. The ingredients of tomato (red), mozzarella (white) and basil (green) can still be found together on menus today on a pie usually named Pizza Margherita after the queen. I do love basil on my pizza …

55. Comic strip canine : SNERT
Snert is the clever dog who belongs to Hägar the Horrible in the classic comic strip.

62. Skater Midori : ITO
Midori Ito is a Japanese figure skater. Ito was the first woman to land a triple/triple jump and a triple axel in competition. In fact she landed her first triple jump in training, when she was only 8 years old …