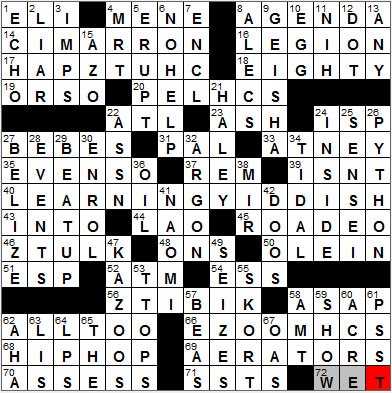 17A. Effrontery : CHUTZPAH (HAPZTUHC)
20A. Lug : SCHLEP (PELHCS)
33A. Gossip : YENTA (ATNEY)
40A. Title on certain language videos … with a hint to entering six answers in this puzzle : LEARNING YIDDISH
46A. Butterfingers : KLUTZ (ZTULK)
56A. Offer unwanted advice : KIBITZ (ZTIBIK)
66A. Shoot the breeze : SCHMOOZE (EZOOMHCS)


Today’s Wiki-est, Amazonian Googlies
Across
1. Director Roth : ELI
Eli Roth is one of a group of directors of horror movies known quite graphically as “The Splat Pack”. I can’t stand “splat” movies and avoid them as best I can. Roth is also famous for playing Donny Donowitz in the Quentin Tarantino movie “Inglourious Basterds”, a good film I thought, if you close your eyes during the gruesome bits.

4. Biblical word on a wall : MENE
In the Book of Daniel, there is the story of the words “Mene, Mene, Tekel u-Pharson” being written mysteriously on the walls of the royal place. This story is the origin of the phrase “the writing’s on the wall”.

14. Edna Ferber novel : CIMARRON
“Cimarron” is a 1929 novel by Edna Ferber, adapted into a film of the same name two years later. The novel is all about the Oklahoma Land Rush. Unsettled land back then was known as Cimarron Territory, a familiar name used by settlers, giving the title to the novel.

17. Effrontery : CHUTZPAH (HAPZTUHC)
Our word “chutzpah” meaning “nerve, gall, impudence” is derived from the Yiddish “khutspe”, which has the same meaning.

20. Lug : SCHLEP (PELHCS)
Our word “schlep” means “to carry, drag”. As one might expect, “schlep” comes from Yiddish, with “shlepen” having the same meaning.

24. AOL, for one : ISP
An Internet Service Provider (ISP) is just what the name indicates, a company that provides its customers with access to the Internet. One way that ISPs differentiate themselves from each other is in the way in which end users are connected to the ISP’s network. So, there are cable ISPs, DSL ISPs, dial-up ISPs and satellite ISPs. I’d go with cable if I were you, if it’s available in your area …

27. Mères’ charges : BEBES
In French speaking countries a “bébé” (baby) is cared for by its “mère” (mother).

37. ___ sleep : REM
REM is an acronym standing for Rapid Eye Movement sleep. REM sleep takes up 20-25% of the sleeping hours and is the period associated with one’s most vivid dreams.

40. Title on certain language videos … with a hint to entering six answers in this puzzle : LEARNING YIDDISH
Yiddish is a High German language that is written in the Hebrew alphabet. Like Hebrew, and unlike German, Yiddish is written from right-to-left.

44. Cuisine whose staple food is sticky rice : LAO
The official name for the country of Laos is the Lao People’s Democratic Republic. In the Lao language, the name is “Meuang Lao”. France ruled the country as part of French Indochina, having united three separate Lao kingdoms. As there was a plural of “Lao” entities united into one, the French added the “S” and so today we tend to use “Laos” instead of “Lao”.

Sticky rice is actually a type of rice, and not a means of preparation. Sticky rice is more usually called “glutinous rice”, even though it does not contain dietary gluten.

45. Competition for truckers : ROADEO
A “roadeo” is a competition held between drivers of buses or trucks. Obviously, the term is a play on the words “road” and “rodeo”.

46. Butterfingers : KLUTZ (ZTULK)
“Klutz” of course comes from Yiddish. The Yiddish word for a clumsy person is “klots”.

48. Walk-___ : ONS
A “walk-on” is a minor role in a theatrical production, usually one that has no spoken lines.

50. Liquid fat : OLEIN
Triolein (also called “olein”) is a triglyceride, a liquid fat. Triolein is found in various amounts in most fats and oils. For example, olive oil can contain up to 30% triolein.

56. Offer unwanted advice : KIBITZ (ZTIBIK)
To kibitz (or less commonly “kibbitz”) is to look on and offer unwanted advice. The term comes into English from German via Yiddish. “Kibitz” developed in German from the name of the bird “Kiebitz” which had the reputation as a meddler.

66. Shoot the breeze : SCHMOOZE (EZOOMHCS)
“To schmooze” is to chat intimately, a word that comes from the Yiddish “shmuesn” meaning ‘to chat” .

68. Genre for Q-Tip : HIP-HOP
Hip-hop originated in New York City in the seventies, developing in inner-city African-American, Jamaican and Latina-American communities. Some say that the term “hip-hop” was first used by the group Grandmaster Flash and the Furious Five. I know practically nothing about hip-hop, I must admit …

Q-Tip is the stage name of rapper Kamaal Ibn John Fareed from Queens, New York. That’s about all I know.

71. Concordes, e.g. : SSTS
The most famous Supersonic Transport (SST) was the Concorde, a plane that’s no longer flying. Concorde had that famous “droop nose”. The nose was moved to the horizontal position during flight to create the optimum aerodynamic shape thereby reducing drag. It was lowered during taxi, takeoff and landing, so that the pilot had better visibility. The need for the droop nose was driven largely by the delta-shaped wings. The delta wing necessitates a higher angle of attack at takeoff and landing than conventional wing designs, so the pilot needed the nose lowered so that he or she could see the ground.

Down
2. “A ___ should have a good memory”: Quintilian : LIAR
Quintilian was a Roman rhetoric, someone whose aim it was to improve the ability and effectiveness of speakers.

4. Villain player in “Rocky III” : MR T
Mr. T’s real name is Laurence Tureaud. Mr. T is famous for many things, including the wearing of excessive amounts of jewelry. He started this habit when he was working as a bouncer, wearing jewelry items that had been left behind by customers at a night club so that the items might be recognized and claimed. It was also as a bouncer that he adopted the name Mr. T. His catchphrase comes from the movie “Rocky III”. In the film, before he goes up against Rocky Balboa, Mr. T says, “No, I don’t hate Balboa, but I pity the fool”. He parlayed the line into quite a bit of success. He had a reality TV show called “I Pity the Fool”, and produced a motivational video called “Be Somebody … or Be Somebody’s Fool!”.

8. Smart ___ : ALECS
Apparently the original “smart Alec” was Alec Hoag, a pimp, thief and confidence trickster who plied his trade in New York City in the 1840s.

9. Woman with many fans? : GEISHA
The Japanese term “geisha” best translates as “artist” or “performing artist”.

15. Kind of dye : AZO
Azo compounds have very vivid colors and so are used to make dyes, especially dyes with the colors red, orange and yellow.

21. ___ Joel Osment of “The Sixth Sense” : HALEY
Haley Joel Osment was excellent in “The Sixth Sense”, playing the young boy who saw “dead people”. Before Osment got that role, he had played Forrest Gump’s young son on screen (bet you didn’t know that!). Since then, he starred in “Pay It Forward” and “A.I”, both very entertaining films.

22. Part of A.M.A.: Abbr. : ASSN
The American Medical Association (AMA) was founded in 1847 at the Academy of Natural Sciences in Philadelphia. The first female member was allowed to join in 1868, but the first African American members weren’t admitted until one hundred years later, in 1968.

26. Popular programming language : PYTHON
Python is a computer language, one that my computing son uses quite often apparently. The developers of the language tried hard to make it fun to use, and even chose its name from the comedy show “Monty Python’s Flying Circus”.

27. Locale of some Mayan ruins : BELIZE
Belize was formerly known as British Honduras, and English is the country’s official language. Belize is located on the northeastern coast of Central America, bordering Mexico and Guatemala.

29. Ragged : BEAT-UP
“Beat-up” is a slang term, with “beaten-up” being the more correct spelling.

38. It spent 5,519 days in orbit : MIR
Mir was a remarkably successful project, with the station still holding the record for the longest continuous manned presence in space, at just under ten years. Towards the end of the space station’s life however, the years began to take their toll. There was a dangerous fire, multiple system failures, and a collision with a resupply ship. The Russian commitment to the International Space Station drained funds for repairs, so Mir was allowed to reenter the Earth’s atmosphere and burn up in 2001.

42. Ski-___ : -DOOS
Ski-Doo is a brand name of snowmobile produced by the Canadian company, Bombardier Recreational Products. The first Ski-Doo went on sale in 1959 and was intended to be named a “Ski-Dog” as the marketing concept was that the personal snowmobile would replace the dogsleds used by hunters and trappers. A painter misread instructions and wrote “Ski-Doo” on the side of the vehicle instead of Ski-Dog, and the name stuck.

47. Buzzers : KAZOOS
The modern instrument we know today as the kazoo was invented by one Alabama Vest of Macon, Georgia in the 1800s. The kazoo first came to the public’s attention at the Georgia State Fair of 1852, when it was known as the “Down-South Submarine” (because of it’s shape, I would imagine).

53. Sporty car roofs : T-TOPS
A T-top is a car roof that has removable panels on either side of a rigid bar that runs down the center of the vehicle, above the driver.

55. Article of female tennis attire : SKORT
Skorts are a hybrid between shorts and a skirt.

57. Arthur and Benaderet : BEAS
Actress Bea Arthur’s most famous roles were on television, as the lead in the “All in the Family” spin-off, “Maude”, and as Dorothy Zbornak in “The Golden Girls”. Arthur also won a Tony for playing Vera Charles on stage in the original cast of “Mame” in 1966, two years after she played Yente the matchmaker in the original cast of “Fiddler on the Roof”.

Bea Benaderet, as well as playing Kate Bradley on “Petticoat Junction”, was the voice of Betty Rubble on “The Flintstones”.

67. Alliance created in ’48 : OAS
The Organization of American States (OAS) has its headquarters in Washington, D.C. All the independent states in the Americas are members of the group, except Honduras which had its membership suspended after the country’s 2009 coup.