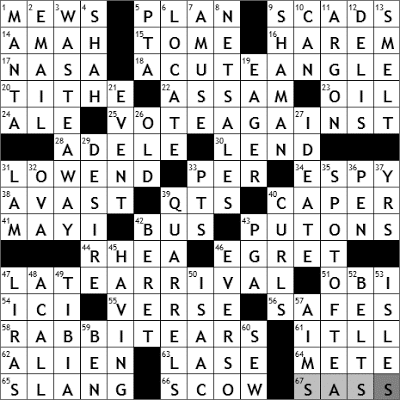 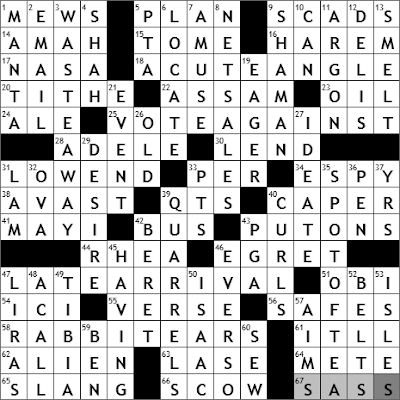 9. Lots and lots : SCADS
The origin of the word “scads”, meaning “lots and lots”, is unclear, although back in the mid-1800s, scads was used to mean “dollars”.

14. Indian housemaid : AMAH
“Amah” is an interesting word in that we associate it so much with Asian culture, and yet it actually comes from the Portuguese “ama” meaning “nurse”. Ama was imported into English in the days of the British Raj in India when it was used to describe a wet-nurse, an amah.

15. Hefty volume : TOME
Tome first came into English from the Latin “tomus” which means “section of a book”. The original usage in English was for a single volume in a multi-volume work. By the late 16th century “tome” had come to mean “a large book”.

16. Women’s area in a palace : HAREM
“Harem” is a Turkish word, derived from an Arabic word meaning “forbidden place”. Traditionally a harem was the female quarters in a household in which a man had more than one wife. Not only wives (and concubines) would use the harem, but also young children and other female relatives. The main point was that no men were allowed in the area.

17. LEM maker : NASA
In the Apollo program, the Lunar Excursion Module (LEM) was the vehicle that actually landed on the moon and returned the astronauts to the command module that was orbiting overhead. The third LEM built was named “Spider”, and it participated in the Apollo 9 mission which tested the functionality of the LEM design in space. The fourth LEM was called “Snoopy”, and it flew around the moon in the Apollo 10 mission, the dress rehearsal for the upcoming moon landing. Apollo 11’s LEM was of course called “Eagle”, and it brought Neil Armstrong and Buzz Aldrin to and from the moon’s surface.

20. Church’s percentage : TITHE
A tithe is traditional payment of one tenth of one’s annual income often given to one’s church. Tithing is a practice taught in many traditions, and according to a 2002 survey, about 3% of American adults actually donate 10% or more of their income to a church.

22. Silk-producing region of India : ASSAM
Assam is a state in the very northeast of India, just south of the Himalayas. Assam is noted for its tea, as well as its silk.

28. Fred’s dancing sister : ADELE
As you may well know, Fred Astaire’s real name is Frederick Austerlitz. Fred was from Omaha, Nebraska and before he made it big in movies, he was one half of a celebrated music hall act with his sister, Adele. The pair were particularly successful in the UK, and Adele ended up marrying into nobility in England, taking the name Lady Charles Cavendish.

30. Act the pawnbroker : LEND
I remember the bad old days growing up in Dublin, Ireland, when my mother had to go to the pawn shop (I hope she doesn’t read this!). I’d wait outside with my brother, looking up at the pawnbroker’s sign, three gold balls hanging down from a metal bar. This traditional sign used by pawnbrokers is said to date back to the Medici family as the sign had symbolic meaning in the province of Lombardy where the Medici family reigned supreme. Because of this connection, pawn shop banking was originally called Lombard banking.

38. Nautical “Stop!” : AVAST
Avast is a nautical term, used to tell someone to stop or desist from what they are doing. The word comes from the Dutch “hou vast” meaning “hold fast”.

42. Greyhound, e.g. : BUS
Speaking as someone who lived much of my life outside of the US, I have to say that the Greyhound bus is real symbol of America, famous from so many old movies. In Ireland the official provincial bus service “stole” the famous logo that gracefully adorns the sides of these buses, and uses an Irish Wolfhound in place of the iconic greyhound.

44. Cousin of an emu : RHEA
Rheas are native to South America, and named after Rhea from Greek mythology, one of the Titans and “the mother of the gods”.

46. Plumed wader : EGRET
At one time the egret was in danger of extinction as it was hunted for its feathers, which were used as plumes in hats.

51. Kimono accessory : OBI
An obi is a sash worn in some forma of dress in Japan, both by men and women, although the styles for women tend to be more ornate.

58. Old TV antenna : RABBIT EARS
Remember the television antenna called a “rabbit ears”? I don’t recall being told this when I was younger, but to get the best reception the length of the “ears” needs to be set at about one half of the wavelength of the signal for the channel to picked up. If only I had known …

64. Allot, with “out” : METE
To “mete out” is to distribute by allotments. The verb comes from the Old English word “metan” meaning “to measure”, likely to be the same root as our word “meter”.

66. Garbage hauler : SCOW
A scow is that flat-bottomed boat with squared off ends that’s often used for transportation, usually pushed or pulled by a barge. Often a scow can be seen carrying junk or garbage.

67. Mouth off to : SASS
“Sass”, meaning “impudence”, is a back formation from the word “sassy”. “Sassy” is an alteration of the word “saucy” that first appeared in English in the 1830s.

1. Powerful ray : MANTA
The manta ray is the largest species of ray, with the largest one recorded as over 25 feet across and weighing 5,100 pounds.

2. iPhone capability : EMAIL
Apple started selling the iPhone at 6 pm local time on June 29, 2007, with hundreds of customers lined up outside stores all over the world. Not me. I use a pay-as-you-go phone from T-Mobile, that cost me less than $45 for the whole of last year for calls and text (including many to Ireland)  …

4. Deposed Iranian ruler : SHAH
The last Shah of Iran was Mohammed-Reza Shah Pahlavi, who was overthrown by the revolution led by the Ayatollah Khomeini 1979. The post-revolution government sought the extradition of the Shah back to Iran while he was in the United States seeking medical care (he had cancer). His prolonged stay in the United States, recovering from surgery, caused some unrest back in Iran and resentment towards the United States. Some say that this precipitated the storming of the US Embassy in Tehran and the resulting hostage crisis.

8. Income statement figure : NET SALES
Gross sales is the total value of all goods or services sold in a period. Net sales is the same number, reduced by the amount of credits given for goods returned for refunds and perhaps any discounts that have been given beyond a reduced sales price.

9. Tribal healer : SHAMAN
A shaman is a supposed intermediary between the human world and the spirit world.

10. Pokey : CAN
“The pokey, poky” is a slang term for prison, possibly a corruption of “pogie”, a term for a “poorhouse”.

12. Places to get Reubens : DELIS
There are conflicting stories about the origin of the Reuben sandwich. One is that it was invented around 1914 by Arnold Reuben, a German-Jew who owned Reuben’s Deli in New York.

13. Remove impurities from : SMELT
Metal is present in ore in the form of oxides. In order to get pure metal from the ore, it is heated and the oxides reduced (the oxygen is removed) in the chemical process known as smelting. The oxygen is extracted by adding a source of carbon or carbon monoxide which uses up the excess oxygen atoms to make carbon dioxide, a waste product of smelting.

29. Tennessee Williams “streetcar” : DESIRE
Desire is the name of a neighborhood in New Orleans, a destination for a streetcar line. The name “Desire” appears on the front of streetcars bound for that neighborhood, hence the title, “A Streetcar Named Desire”.

31. Skedaddle : LAM
To be “on the lam” is to be in flight, to have escaped from prison. It is American slang that originated at the end of the 19th century. The word “lam” also means to “beat” or “thrash”, as in “lambaste”. So “on the lam” might derive from the phrase “to beat it”, to scram.

36. International writers’ org. with appropriate initials : PEN
The worldwide association of writers was founded in London in 1921, and is now called International PEN. The acronym PEN originally stood for Poets, Essayists and Novelists, but that meaning has been dropped as the association now includes writers in other fields e.g. journalists and historians. It is the oldest international writers organization and, as it fights for writers who are harassed for voicing their views. it is also the world’s oldest human rights group.

42. Special Forces cap : BERET
The US Army Special Forces are known as the Green Berets because they wear … green berets. The Green Beret is also worn by the Royal Marines of the British Army. When US Army Rangers and OSS operatives were trained by the Royal Marines in Scotland during WWII, graduates of the gruelling training program were awarded green berets by their British instructors. The US soldiers, although proud of their new headgear, were not allowed to wear it as part of their uniform and had to wait until 1961 when President Kennedy authorized the green beret for exclusive use by US Special Forces.

43. Masters org. : PGA
Golf’s Masters Tournament is the first of the four major championships in the annual calendar, taking place in the first week of April each year. It is played at Augusta National Golf Club in Georgia, and has a number of traditions. One is that the winner is awarded the famous “green jacket”, but he only gets to keep it for a year and must return it to the club after twelve months.

47. Turkish money : LIRAS
The name “lira” is used in a number of countries for currency. It comes from the Latin word for a pound, and is derived from a British pound sterling, the value of a Troy pound of silver. The Turkish lira has been around since the mid 1870s.

49. Neighbor of the fibula : TIBIA
The tibia is larger of the two bones below the knee, and is the strongest weight-bearing bone in the human body. “Tibia” is the Roman name for a Greek flute called an “aulos”. It is thought that the shin bone was given the name “tibia” because often flutes were fashioned out of the shin bones of animals.

50. Hayes or Newton : ISAAC
Isaac Hayes was a soul singer and songwriter. Hayes wrote the score for the 1971 film “Shaft”, and the enduring “Theme from ‘Shaft'” won him an Academy Award in 1972.

Isaac Newton was of course one of most influential people in history, the man who laid the groundwork for all of classical mechanics. The story about an apple falling on his head, inspiring him to formulate his theories about gravity, well that’s not quite true. It probably didn’t hit him on the head, but Newton himself often told the story about observing an apple falling in his mother’s garden and how this made him acutely aware of the Earth’s gravitational pull.

53. Cays : ISLES
A key is a low island offshore, also known as a cay (as in the Florida Keys). Our term in English comes from the Spanish “cayo” meaning “shoal, reef”.

59. Gridder Roethlisberger : BEN
Ben Roethlisberger is an NFL quarterback, playing for the Pittsburgh Steelers. He has the nickname “Big Ben”, and even has own line of barbecue sauce you might want to check out, “Big Ben’s BBQ”.

60. Use a Singer : SEW
Isaac Singer was not only an inventor, but also an actor. For much of his life, profits made from his inventions supported him while he pursued his acting career. Singer didn’t actually invent the sewing machine, and never claimed to have done so. What he did do though, was invent a version of the machine that was practical and easily used in the home.