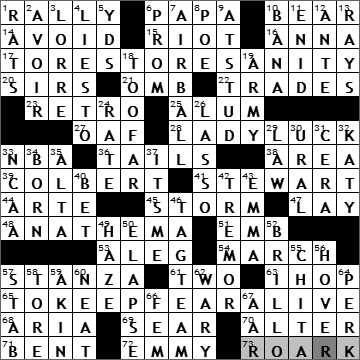 THEME: 10/30/10 … all the theme answers are related to the RALLY TO RESTORE SANITY and the MARCH TO KEEP FEAR ALIVE, organized by Jon Stewart and Stephen Colbert.
COMPLETION TIME: 6m 45s
ANSWERS I MISSED: 2 ROARK (ROURK), CHITA (CHITU)

Glenn Beck of fox News held a “Restoring Honor” rally at the Lincoln Memorial on August 28, 2010. Al Sharpton organized a counter-rally for the same day, calling it the “Reclaim the Dream” march. These politically right- and left-leaning events sparked a satirical response on “The Daily Show” with Jon Stewart announcing a “Rally to Restore Insanity” closely followed by Stephen Colbert announcing a counter-rally, a “March to Keep Fear Alive”. The two events have now been combined, and scheduled for October 30, 2010. One of the stated objectives by Stewart is to give representation to the “70-80 percenters”, the people of the country who don’t relate comfortably to the extreme right nor the extreme left of politics.

Bill O’Reilly is best known as the host of “The O’Reilly Factor” on the Fox News Channel. O’Reilly’s positions are very much on the right side of the political spectrum, with at least one notable exception, his opposition to the death penalty. He suggests that convicted murderers should be locked up without the possibility of parole, in a military prison with forced labor for eight hours a day.

16. Tolstoy’s Karenina : ANNA
I have to admit to not having read the Tolstoy’s “Anna Karenina”, but I did see the excellent 1977 British television adaptation starring Nicola Pagett.

21. White House fiscal grp. : OMB
The Office of Management and Budget is the successor to the Bureau of the Budget, formed in 1970 during the Nixon administration.

25. Reunion goer : ALUM
An alumnus (plural … alumni) is a graduate or former student of a school or college. The female form is alumna (plural … alumnae). The word comes into English from Latin, in which alumnus means foster son or pupil.

33. Wizards’ and Celtics’ org. : NBA
The Washington Wizards used to be called the Washington Bullets. The team owner back in 1995, Abe Pollin, had grown uncomfortable with the “Bullets” moniker due to its association with violence and crime. The Prime Minister of Israel,Yitzhak Rabin, was a very close friend of Pollin. When Rabin was assassinated, the violent act moved Pollin to make the name change. The downside to the change was that “Wizard” offended some in the African-American community due to the name’s association with the Klu Klux Klan.

38. Pi r squared, for a circle : AREA
By definition, the ratio of the circumference of a circle to its diameter is the mathematical constant known as pi. The same constant shows up as the ratio of a circle’s area to its radius squared.

39. Organizer of the 54-/65-Across : COLBERT
54. With 65-Across, event of 10/30/10 : MARCH
65. See 54-Across : TO KEEP FEAR ALIVE
Stephen Colbert is a political satirist who hosts his own show on Comedy Central, “The Colbert Report”. Colbert’s first love was theater, and so he studied to become an actor. He then moved into comedy, and landed up on the “The Daily Show with Jon Stewart”. He left “The Daily Show” in 2005 to set up his own spin-off, “The Colbert Report”.

41. Organizer of the 1-/17-Across : STEWART
1. With 17-Across, event of 10/30/10 : RALLY
17. See 1-Across : TO RESTORE SANITY
Jon Stewart is a political satirist and the current host of “The Daily Show” on Comedy Central. Stewart started out as a stand-up comic, and took over “The Daily Show” from Craig Kilborn in 1999. Stewart is a great fan of the New York Times Crossword, and appears in the fabulous movie about the New York Times Crossword “Wordplay

” (if you love this crossword, you will love this fantastic film

!). Stewart actually proposed to his wife using a personalized crossword that he created with the help of Will Shortz!

44. Uffizi display : ARTE
The Uffizi Gallery is one of the oldest art museums in the western world, housed in the Palazzo degli Uffizi in Florence, Italy. The Palazzo was built in 1560, intended to house the offices of the Florentine magistrates. This original usage gave the gallery its name, as “uffizi” is Italian for “offices”.

47. Troubadour’s song : LAY
In the mid-13th century, a lay was a short song, a word that evolved from the Old French word “lai” meaning “song, lyric”.

48. Object of loathing : ANATHEMA
An anathema or bane is a source of persistent annoyance. Anathema is the Latin word for an excommunicated person.

51. Envoy’s bldg. : EMB
An envoy works at an embassy and is a representative of a government, someone ranking below an ambassador. The name comes from the concept of the envoy being a “messenger” from his or her government. “Envoyer” is the French word for “to send”.

“Rigoletto” is one of Giuseppe Verdi’s most famous and oft-performed operas. The storyline comes from the Victor Hugo play “Le roi s’amuse” (usually translated as “The King’s Fool”). Rigoletto is that King’s fool, the jester.

72. Award won for 39- and 41-Across’s programs : EMMY
The Emmy Awards are the television equivalent of the Oscars for film, the Grammy Awards for music and the Tony Awards for the stage. Emmy Awards are presented throughout the year, depending on the sector of television being honored. The most famous of these ceremonies is the Primetime Emmy Awards, followed by the Daytime Emmy Awards. The distinctive name of “Emmy” is a softened version of the word “immy”, the nickname given to the video camera tubes found in old television cameras.

73. “The Fountainhead” hero : ROARK
“The Fountainhead” by Ayn Rand was first published in 1943, her first novel to achieve public success. The story focuses on an idealistic architect, Howard Roark. Roark is uncompromising in his designs, refusing the give the public what it wants, staying doggedly loyal to his own vision.

Ayn Rand was a Russian-American novelist born Alisa Rosenbaum. Her two best known works are her novels “The Fountainhead” published in 1943 and “Atlas Shrugged” in 1957. Back in 1951, Ayn Rand moved from Los Angeles to New York City. Soon after, she gathered a group of admirers around her with whom she discussed philosophy and shared drafts of her magnum opus, “Atlas Shrugged”. This group called itself “The Collective”, and one of the “founding members” was none other than future Federal Reserve chairman, Alan Greenspan.

3. Peter of “Casablanca” : LORRE
The marvelous actor Peter Lorre was born in what is now modern-day Slovakia. His real name was Laszlo Lowenstein. He started acting in Vienna, when he was quite young, only 17 years old. When Hitler came to power, the Jewish Lowenstein headed to Paris, then London, eventually ending up in Hollywood. He found himself typecast as the wicked foreigner in American movies, but I think he sneered and snarled his way to the bank.

6. Annual coronation site : PROM
There is usually a king and queen crowned at the prom (sort for promenade).

Edgar Allan Poe lived a life of many firsts. He is considered to be the inventor of the detective-fiction genre. He was also the first notable American writer to make his living through his writing, something that didn’t really go too well for him as he was always financially strapped. In 1849, he was found on the streets of Baltimore, delirious from either drugs or alcohol. He died a few days later in hospital, at 39 years of age.

9. Offered for breeding : AT STUD
The word “stud”, meaning “a male horse kept for breeding”, is derived from the Old English word “stod” which described a whole herd of horses.

10. Eric who played the Hulk in 2003 : BANA
Eric Bana is an Australian actor, who enjoyed a successful career in his home country before breaking into Hollywood playing an American Delta Force sergeant in “Black Hawk Down”. A couple of years later he played the lead in Ang Lee’s 2003 movie “The Hulk”, the role of Dr Bruce Banner.

13. Tampa Bay team : RAYS
The Tampa Bay Rays is a relatively “young” franchise, being formed in 1998. They are apparently still working on building the team, as it has finished in last place in the Eastern Division of the American League in all but three seasons so far.

30. ___ Mountains, Europe/Asia separator : URAL
The Ural Mountains are generally regarded as the natural divide between the the continents of Europe and Asia.

32. 1918 song girl whose name was sung with a stutter : KATY
“K-K-K-Katy” is a song telling the story of a young soldier who stutters when he talks to girls. It was recorded by Billy Murray in 1918, and again by Mel Blanc of cartoon fame, in 1949 using the voice of Porky Pig.

33. Final Four inits. : NCAA
The National Collegiate Athletic Association dates back to the Presidency of President Theodore Roosevelt. When President Roosevelt’s son broke his nose playing football at Harvard, Roosevelt turned his attention to the number of serious injuries and even deaths occurring in college sports. He instigated meetings between the major educational institutions, leading to the formation of the Intercollegiate Athletic Association of the United States in 1906 with the remit of regulating college sports. The IAUSS evolved into the NCAA in 1910.

42. 2 or 3 on the Richter scale, maybe : TREMOR
The Richter scale was developed in 1935, by Charles Richter at the California Institute of Technology. Maybe that’s why we still use it out here, while the rest of the world has moved to the “moment magnitude scale”. Reports of earthquake magnitude are usually given using the “moment magnitude scale”, but the media don’t bother to specify which scale is being quoted.

43. Jane Austen meddler : EMMA
“Emma” is just a wonderful novel by Jane Austen, first published in 1815. I had the privilege a few years ago of attending the premier of “Emma”, a delightful musical adaptation for the stage. If you ever get the chance to see it, I highly recommend it …

52. S.O.S alternative : BRILLO
S.O.S is a brand name of scouring pads made from steel wool impregnated with soap. The product was invented as a giveaway by an aluminum pot salesman in San Francisco called Ed Cox. His wife gave it the name “S.O.S” as an acronym for “Save Our Saucepans”. Note the punctuation! There is no period after the last S, and that is deliberate. When Cox went to register the trademark, he found that S.O.S. could not be a trademark because it was used as an international distress signal. So, he dropped the period, and I hope made a lot of money for himself and his wife.

Brillo Pad is a soapy, steel wool pad, patented in 1913. The company claims that the name “Brillo” is derived from the Latin word for “bright”. The problem with the assertion is that no such word exists in Latin, although the prefix brill- is used for words meaning “bright” in Italian, French and Spanish.

55. Tony-winning Rivera : CHITA
Chita Rivera is an actress best known for her work in musical theater. She was honored with the Presidential Medal of Freedom in 2009.

67. Swiss river : AAR
The Aar (also called the Aare in German) is a major river in Switzerland. A famous spot along the river is The Reichenbach Falls in the center of the country, actually a series of waterfalls near the city of Meiringen. The falls are famous in the world of literature as it was here that Sherlock Holmes fell to his supposed doom with his nemesis, Professor Moriarty (in “The Adventure of the Final Problem”).