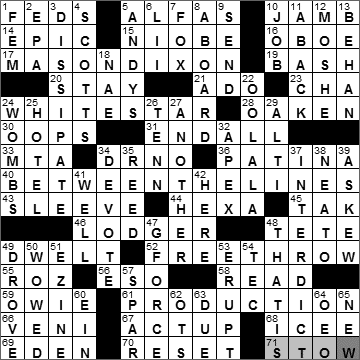 THEME: STAY and READ … BETWEEN THE LINES. The theme answer STAY and READ are located in the grid between two “lines” i.e. STAY between the MASON-DIXON and WHITE STAR lines, and READ between the FREE THROW and PRODUCTION lines
COMPLETION TIME: 13m 25s
ANSWERS I MISSED: 0

5. Some Spiders, informally : ALFAS
The Spider is a roadster that was manufactured by the Italian auto company, Alfa Romeo. It was in production from 1966 to 1993, and considered a design classic.

10. Part of a frame : JAMB
A door jamb is the vertical portion of a door frame. The term “jamb” comes from the French word “jambe” meaning “leg”.

15. Petrified weeper of myth : NIOBE
In Greek mythology, when Niobe’s children were killed, she fled to Mt. Sipylus where she was turned into stone and weeped for eternity. There is in fact a Niobe’s Rock on Mt. Sypylus which resembles a female face, and is known as “The Weeping Rock”.

16. Member of a pit crew? : OBOE
An oboe player can be found in an orchestra pit.

The oboe is perhaps my favorite of the reed instruments. The name “oboe” comes from the French “hautbois” which means “high wood”. When you hear an orchestra tuning before a performance, you’ll note (pun intended!) the oboe starts off the process by playing an “A”. Everyone tunes in turn to that oboe’s “A”. Oh, and if you want to read a fun book (almost an “expose”) about life playing the oboe, you might try “Mozart in the Jungle

17. Border names : MASON-DIXON
The original Mason-Dixon line was surveyed by Charles Mason and Jeremiah Dixon in the 1760s. The line was used to resolve a border dispute between some of the original British colonies. The Mason-Dixon now forms part of the state lines of Pennsylvania, Maryland, Delaware and West Virginia. The line has come to symbolize the cultural boundary between the Northern and Southern United States.

20. With 40-Across, coloring advice … and literally so : STAY
STAY … BETWEEN THE LINES (MASON-DIXON & WHITE STAR)

23. Half a dance : CHA
I think this is technically an error, as the dance is correctly called a cha-cha-cha, not a cha-cha.

The cha-cha-cha is a Latin dance with origins in Cuba, where it was introduced by composer Enrique Jorrin in 1953.

24. Owner of the Titanic : WHITE STAR
The RMS Titanic set off on her tragic maiden voyage in 1912, sailing from Southampton, England, bound for New York City. Regulations only required that the ship have lifeboat capacity for 1,178 people, even though a full complement of passengers and crew was 3,547. When the order was given to abandon ship, the captain adhered to the traditional protocol of “women and children first”. As a result, only 20% of male passengers survived the disaster, compared to 75% of the female passengers. Perhaps more telling is that 61% of those in first class survived, and only 25% of those in third class. The crew fared even worse though, with only 24% making it.

28. Old ___ Bucket (Big Ten conference football prize) : OAKEN
An old oaken bucket is a traditional trophy awarded in Indiana, and was chosen as the prize when an annual trophy game was inaugurated between Purdue and Indiana in 1925. The particular bucket selected is supposedly one that dates back to the 1840s. Each year the football game is played, a link is added to the chain attached to the bucket. Each link is engraved with either a “P” or and “I”, or perhaps an “I-P”, depending on who wins the football game.

33. 1959 hit with the lyric “Did he ever return? No, he never returned” : M.T.A.
“M.T.A.” was a 1958 hit for the Kingston Trio. The song tells of a man stuck on board an MTA subway car in Boston. His problem is that “exit fares” had been introduced on the system to supplement “entrance fares” (true story!), and the man didn’t have the extra nickel needed to get off the train.

34. Fictional villain whose given name is Julius : DR. NO
“Dr. No” may have been the first film in the wildly successful James Bond franchise, but it was the sixth novel in the series of books penned by Ian Fleming. Fleming was inspired to write the story after reading the Fu Manchu tales by Sax Rohmer, and if you’ve read the book or seen the film, you’ll recognize the similarity in characters.

36. Antique asset, often : PATINA
Patina is the oxide film that develops on brass and similar metals over time. It’s patina that make Lady Liberty the lovely green color that she is.

48. Head of Haiti : TETE
The Caribbean island of Hispaniola was a target for European settlers, and ended up being a disputed territory between France and Spain. The two countries divided the island, with the French taking control of the western third, which they named Saint-Domingue. Saint-Domingue was later to become the independent, and French-speaking, Republic of Haiti.

“Tete” is the French word for “head”.

55. The New Yorker cartoonist Chast : ROZ
Roz Chast had her first cartoon publlished in “The New Yorker” in 1978, and has had more than 800 published since then.

58. With 40-Across, infer something … and literally so : READ
READ … BETWEEN THE LINES (FREE THROW & PRODUCTION)

66. Start of an old boast : VENI
The oft-quoted “Veni, vidi, vici” (I came, I saw, I conquered) was apparently written by Julius Caesar. The words date back to 47 BC and refer to the short war between Rome and Pharnaces II of Pontus.

68. Frozen drink brand : ICEE
Icee is the brand name of one of those slushy drinks. Ugh …

69. Elysium : EDEN
In Greek mythology Elysium was part of the Underworld where heroic and virtuous souls were laid to rest. Nowadays we use the word Elysium to mean a place or condition of ideal happiness, a Garden of Eden.

Down
2. Abbr. in many car ads : EPA
The Environmental Protection Agency was set up during the Nixon administration, and began operation at the end of 1970.

4. Big name in lawn care : SCOTT’S
Scott’s Miracle-Gro Company was founded in 1868 by one Orlando Scott, initially selling seed to the agricultural industry. In the early 1900s it started to sell to homeowners, mainly supplying lawn seed. The company merged with the gardening company Miracle-Gro in 1955.

5. Some male dolls : ANDYS
Raggedy Andy was introduced as the brother to Raggedy Ann in a the 1920 book “Raggedy Andy Stories”.

Raggedy Ann is a rag doll, created by Johnny Gruelle in 1915, for his daughter, Marcella. He decided to name the doll using the titles of two poems by James Whitcomb Riley, “The Raggedy Man” and “Little Orphan Annie”. Gruelle introduced Raggedy Ann in a series of books three years later. Sadly, Marcella died at 13 years of age, with her father blaming a smallpox vaccination she was given at school. Gruelle became very active in the movement against mass vaccination, for which Raggedy Ann became a symbol.

10. Butcher, baker or candlestick maker : JOB
The nursery rhyme “Rub-a-Dub-Dub” dates back to at least 1798 when it was first published in London:

“Rub-a-dub-dub,
Three men in a tub,
And how do you think they got there?
The butcher, the baker,
The candlestick-maker,
They all jumped out of a rotten potato,
‘Twas enough to make a man stare.”

12. ___ Arens, former Israeli defense minister : MOSHE
Moshe Arans is a former Israeli politician, one with a lot of experience. He served as Minister of Defense three times, Minister of Foreign Affairs once, and was also Ambassador the United States.

13. Irish writer Brendan : BEHAN
Brendan Behan was an Irish writer and playwright. His most famous work is probably “Borstal Boy”, an autobiographical novel. Borstal is a term used in the British Isles for juvenile detention. Behan was quite a character, famous for being a heavy drinker (“a drinker with a writing problem”, as he described himself). The drink eventually put him in an early grave, at 41 years. I used to walk to school in Dublin right past the pub where he spent many hours every day.

24. Sonogram targets : WOMBS
A sonogram is an image made created using ultrasound. “Ultrasound” is the name given to sound energy that has frequencies above the audible range.

29. Prefix with meter : ALTI
An altimeter is an instrument used to measure altitude.

41. Wisher’s spot : WELL
A wishing well is a phenomenon that comes from European folklore. The concept arose from the belief that water housed friendly gods.

47. Pressing concern for an astronaut? : G FORCE
The force of gravity that we all feel is referred to as one G. As gravity is a actually an accelerating force, acceleration is measured relative to the force of gravity. So, if we are sitting in a vehicle that accelerates at 3G, then we will experience a force that is three times that which we experience from the gravitational pull of the earth.

49. Was the designated one? : DROVE
The designated driver concept originated in Scandinavia, way back in the 1920s. We really started promoting the idea here in the US in the late eighties. It’s a very good idea to designate the driver before the evening begins. You don’t want too many cars to drive home at the end of the night …

54. Gumshoe : TEC
Gumshoe is a slang term for a private detective or private investigator (P.I.). Apparently the term “gumshoe” dates back to the early 1900s, and refers to the rubber-soled shoes popular with private detectives.

62. Some game enders, for short : OTS
There might be overtime at the end of the game.

64. Antipoverty agcy. : OEO
The Office of Economic Opportunity was created during the Lyndon Johnson administration. The agency was responsible for administering the War on Poverty programs that were part of the President Johnson’s Great Society agenda. The OEO was shut down by President Nixon, although some of the office’s programs were transfered to other agencies. A few of the OEO’s programs are still around today, like Head Start for example.