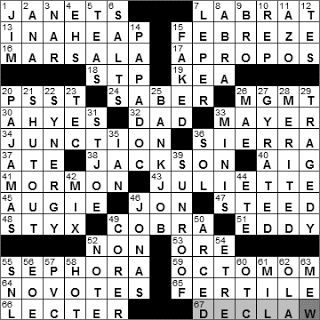 THEME: Months of the Year … The twelve theme answers all start with the 3-letter abbreviations for the months of the year, in order e.g. JAN-ETS, FEB-REZE, MAR-SALA
COMPLETION TIME: 9m 30s
ANSWERS I MISSED: 0

Janet Reno was Attorney General of the US from 1993 to 2001, the second longest serving person, and the first woman to hold the post. In 2002, Reno ran for Governor of Florida but failed to win the Democratic nomination. Thereafter she retired from public life.

The odor eliminating product we know today as Febreze was developed in England, and is now produced by Product & Gamble.

Marsala is a seaport lying in the very west of Sicily. If you visit Marsala, you’ll find what’s called “vintage” Marsala wine, a “regular” red wine. If you buy a bottle of Marsala at the local store though, it will be a fortified wine, wine with a higher alcohol content.

Apropos comes into English directly from French, in which “a propos” means “to the purpose”.

19. Mauna ___ : KEA
Mauna Kea is a dormant volcano on the Big Island of Hawaii, the peak of which is the highest point in the whole state. Mauna Kea is in effect the tip of a gigantic volcano rising up from the seabed. So, the real height of the volcano is over 33,000 feet, quite a bit higher than Mount Everest (at 29,029 feet).

26. Band with the 2008 song “Electric Feel” : MGMT
MGMT is a band from Brooklyn, New York. In 2009, MGMT settled a famous legal dispute with the French political party headed by Nicolas Sarkozy, the French President. The party had used some of the band’s music illegally, so MGMT sued. The settlement payment awarded was donated to the relief effort for victims of the devastating earthquake in Haiti in 2010.

Lazar Meir was born in Belarus in 1884, but we know him better as Louis B. Mayer, the famous American film producer and boss of MGM (Metro-Goldwyn-Meyer).

34. *Roundabout, for one : JUNCTION
JUN-CTION

36. ___ Nevada : SIERRA
The American Sierra Nevada range lies along the border between the states of California and Nevada. The “original” Sierra Nevada is in Andalusia in Spain, with the name meaning “snowy range” in Spanish.

38. See 1-Across : JACKSON
Janet Jackson is the youngest of the famed Jackson family of musicians. She is a very successful musical artist (she has sold over 100 million records!) but also devotes a lot of time to acting. When she was quite young she appeared on the TV show “Fame”, and in 1993 had her first starring role in a film, “Poetic Justice”. She followed that up with a part in “Nutty Professor II” playing opposite Eddie Murphy. As usual, she got to sing on the movie’s soundtrack and produced a number one with the song “Doesn’t Really Matter”. Then there was the 2004 Super Bowl half time show, and a wardrobe malfunction …

40. Bailed-out co. in 2009 news : AIG
AIG is the American International Group, a giant insurance corporation (or at least it was). After repeated bailouts by American taxpayers, the company made some serious PR blunders by spending large amounts of money on executive entertainment and middle management rewards. These included a $444,000 California retreat, an $86,000 hunting trip in England, and a $343,000 getaway to a luxury resort in Phoenix. Poor judgment, I’d say …

41. Latter-day Saint : MORMON
Joseph Smith, Jr. published the Book of Mormon in 1830, and founded his church, originally called the Church of Christ, later known as the Church of the Latter Day Saints. Today, the largest of the churches descended from Smith’s organization is called the Church of Jesus Christ of Latter-day Saints, with the members of the church referred to as Latter Day Saints. The name “Mormons” is just a nickname, derived from the title of Joseph Smith’s book.

Juliette Lewis is an actress whose big break came in 1991 playing the traumatized daughter in the Martin Scorsese remake of “Cape Fear”. Another famous role for Lewis was the female lead in Oliver Stone’s 1994 hit, “Natural Born Killers”.

Augie Doggie and his father, Doggie Daddy, appeared in the Hanna-Barbera cartoon classic series, “The Quick Draw McGraw Show”. Doggy Daddy was famous for his regular line referring to Augie, “Dat’s my boy who said dat”.

” (if you love this crossword, you will love this fantastic film!). Stewart actually proposed to his wife using a personalized crossword that he created with the help of Will Shortz!

48. Dead river? : STYX
The River Styx in Greek mythology was the river that formed the boundary between Earth and the Underworld (also called Hades). The souls of the newly dead had to cross the River Styx in a ferryboat piloted by Charon.

49. Mongoose’s foe : COBRA
The name “mongoose” has no relationship with the “goose” as such, as the name is derived from an Indian name for the beast, “mangus”. The mongoose does indeed eat snakes as part of its diet, along with other small creatures. However, it usually avoids the dangerous cobra, although humans have used the mongoose to fight cobras for sport and entertainment. The mongoose fares well against poisonous snakes because the mongoose is agile and wily, and it has a thick skin, literally.

55. *Cosmetics chain whose name comes from the Greek for “beauty” : SEPHORA
SEP-HORA

Sephora is a French chain of cosmetic stores, founded in 1969. The name “Sephora” is derived from the Greek for “beauty” (sephos). We’ve been able to visit Sephora outlets in JCPenney stores since 2006.

Octomom is the name the media gave to Nadya Doud-Suleman Gutierrez. There was a lot of controversy surrounding the birth of her octuplets in 2009, with the aid of in vitro fertilization. She already had six children, and was unemployed and using public assistance programs.

2. Santa ___ : ANA
Santa Ana is the county seat of Orange County, California, taking its name from the Santa Ana River that runs through the city. The Santa Ana winds are the very dry air currents that sweep offshore late in the year in Southern California. Because they are so dry, they are noted for their influence over forest fires in the area, especially in the heat of the fall. The winds arise from a buildup of air pressure in the Great Basin that lies between the Rocky Mountains and the Sierra Nevada. Under the right conditions, the air spills over the peaks of the Sierra Nevada, and basically “falls” down the side of the Sierra range, heading for the ocean. As the air falls, it becomes drier and heats up, so that the relative humidity can even be below 10% as it hits the coast.

5. Oolong and others : TEAS
The name for the Chinese tea “oolong” translates into English as “black dragon”.

7. Outcast : LEPER
The horrible disease known as leprosy is also called Hansen’s disease, named after the Norwegian physician famous for isolating the bacterium that causes the disease.

8. Start of a spell : ABRA
Abracadabra has a long history. It was used as far back as the 2nd century AD in Ancient Rome, when the word was prescribed by a physician to be worn on an amulet, to help his emperor recover from disease. The word is Aramaic, and has the approximate translation of “I will create as I speak”.

11. ___ dye : AZO
Azo compounds have very vivid colors, and so are used to make dyes, especially with the colors, red, orange and yellow.

12. Parisian possessive : TES
“Tes” means “your”, when referring to a single individual. The plural “your” is “votre”.

14. Nickname of the dictator who said “I know the Haitian people because I am the Haitian people” : PAPA DOC
The dictatorial President of Haiti known as “Papa Doc” was in fact a medical doctor. Francois Duvalier graduated with a medical degree from the University of Haiti in 1934, and even spent a year studying public health at the University of Michigan. It was his grateful patients who used to call him Papa Doc. When he came to power as President, he was less caring, and ruled with an iron fist until he died in office in 1971.

20. Sleepers : PAJAMAS
Our word “pajamas” comes to us from the Indian subcontinent, where “pai jamahs” were loose fitting pants, tied at the waist, that were worn at night by locals and eventually by the Europeans living there. And “pajamas” is another of those words that I had to learn to spell differently when I came to America. In the British Isles the spelling is “pyjamas”.

22. Working well together : SYNERGY
The word “synergy”, meaning “working together”, comes from the Greek “syn-” (together) and “ergon” (work).

27. Did the watusi, e.g. : GYRATED
The Watusi was almost as popular as the twist in the early sixties. The dance took its name from the Batutsi tribe in Rwanda.

31. Missouri city, informally : ST JOE
The city of Saint Joseph in Missouri was the westernmost point in the US that was accessible by rail after the Civil War. As such, it was a final stopping-off point as people headed out to the Wild West. The city takes its name from its founder, fur trader Joseph Robidoux. Robidoux apparently like things named after himself and his family, as eight of the main streets downtown were named after his children, and another was named for his second wife.

33. Some skirts : MINIS
Mary Quant introduced what we now know as the miniskirt in 1965.

35. Actor Holm : IAN
English actor Sir Ian Holm is very respected on the stage in the UK, but is better known for his film roles here in the US. Holms played the hobbit Bilbo Baggins in two of the “Lord of the Rings” movies, and he also played the character who turns out be an android in the film “Alien”.

44. Summer on the Seine : ETE
Ete is the French word for summer.

46. Pop’s ___ Brothers : JONAS
A young neighbor of mine went to see the Jonas Brothers in concert not so long ago. She came home swooning …

55. “___ Digital Shorts” : SNL
Since 2005, the “Saturday Night Live” comedy show has been airing a feature called “SNL Digital Shorts”. These spots break away from the “live” format of the show, and are prerecorded for airing during the Saturday broadcast. The Digital Shorts are filmed on consumer-grade digital cameras, and are edited on personal computers. They can feature members of the regular cast, musical guests, and celebrity cameos.

57. Common pipe material, briefly : PVC
PVC is polyvinyl chloride, the third most widely produced plastic in the world (after polyethylene and polypropylene). PVC is resistant to corrosion from biological and chemical agents making it a favored choice these days for sewage lines, replacing the traditional metal materials. It is so chemically stable, that it isn’t going away any time soon …

60. Like some stocks, for short : OTC
Over-the-counter (OTC) trading of stocks is a way of trading directly mean two parties, as opposed to exchange trading in which trading occurs in an exchange.

62. Suffix with pay or plug : OLA
Payola is the illegal practice of paying radio stations or disk jockeys to repeatedly play a particular piece of music. The idea is that the more often a song is played, the more likely it is to sell. The term “Payola” comes from the words “pay” and “Victrola”, an RCA brand name for an early phonograph.

“Plugola” is similar to “payola” in that it is a form of promotion, but unlike payola, I believe it’s perfectly legal. Plugola is the public self-promotion of something in which the promoter has a financial interest, without disclosing that interest.