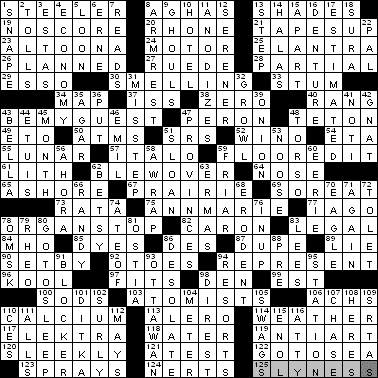 Completion Time: not timed.
Theme: “Cross Words” … 11 answers contain two words, one horizontal, one vertical, and crossing at the central letter.
Answers I missed: none.

TODAY’S GOOGLIES (all links go to Amazon.com) …
Across
8 AGHAS: Aghas were officials in the Ottoman (Turkish) Empire

is in the south of France, on the River Rhone. It was home to several popes

during the 14th and 15th centuries.
23 ALTOONA: Altoona

is in central Pennsylvania, and is home to the Ivyside Park Campus of Pennsylvania State University

is a famous road in Paris, running by the Louvre

. It is named after Napoleon’s victory against the Austrians at the Battle of Rivoli

in 1797.
33 STUM: Stum is wine that fails to ferment, perhaps due to the presence of too much sulfur.
47 PERON: Nowadays, President Juan Peron of Argentina

is less well known that his wife, Eva Peron

was in command of the European Theater of Operations during WWII. If you’re a WWII buff like me, there’s a great made-for-TV movie starring Tom Selleck as Eisenhower called “Ike: Countdown to D-Day

novel “Palomar” was translated into English as “Mr. Palomar”

sits on the Baltic Sea in Northern Europe.
67 PRAIRIE: The three Prairie Provinces are also known as the Canadian Prairies

is a play by William Shakespeare

, with Othello as the hero, and Iago as the villain of the piece.
78 ORGAN STOP: Organ stops can be grouped into the type of tone produced. The dulciana is classified as a “string” (as opposed to say a flute or a reed).
82 CARON: Leslie Caron

was just beautiful as “Gigi”

in the 1958 movie, playing alongside Maurice Chevalier

have been around since the mid-sixties, and are most famous for their hit “Celebration”

.
99 EST: EST is Electroshock Therapy.
103 ATOMISTS: The atomists believed that the world was composed of just atoms and voids, and that the atom was an indestructible particle. How wrong they were …
119 ANTI-ART: Anti-art

is a movement that rejects the accepted definitions of what is art, the first example of which is Dadaism

is a character in the Harry Potter novels

, played by the wonderful Alan Rickman in the movies.
14 HALAS: George Halas (Sr.)

.
35 AGAR: Agar is a jelly extracted from seaweed, with many uses. It is found in Japanese desserts, can be used as a laxative, and is the most common growth medium used for growing bacteria in petri dishes.
41 NOT I:  Who will help the Little Red Hen

, an actor from Switzerland, was the first person to receive an Oscar. He was the star of the silent movie “The Last Command

” from 1928.
48 TORSO: The Belvedere Torso sits in the Vatican Museum, and it takes it name from the Courtyard of the Belvedere in Rome, where it was once installed.
51 SLOAN: John French Sloan

was an American artist who painted “McSorley’s Bar

is a character in the Oz books by L. Frank Baum

. In some stories, she shows up as a great friend of Dorothy, of “Wizard of Oz”

was written by Erma Bombeck

and published in 1979.
68 ERODENT: The adjective from “erode”, tending to erode.
78 OMSK: Omsk in in southwest Siberia.
81 OSTIA: Ostia Antica

was the harbor city for Ancient Rome. Ostia is a the Latin for “mouth”, and Ostia lies at the mouth of the River Tiber.
108 HERE’S: Here’s Johnny! (Johnny Carson).
109 SRTAS: Madrilenas (feminine form) are people from Madrid, hence the answer is senoritas.