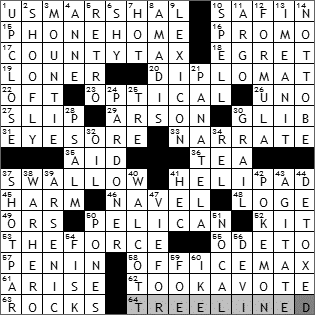 
TODAY’S GOOGLIES (all links go to Amazon.com) …
Across
10 SAFIN: Marat Safin is a tennis player from Russia, now retired.
15 PHONE HOME: The catchphrase from the 1982 Spielberg movie “E.T.

is “ET, phone home!”
18 EGRET: At one time the egret species was in danger of extinction due to hunting driven by the demand for plumes for hats.
23 OPTICAL: Optical fiber is used for most of the communication trunk lines installed these days.
53 THE FORCE: Darth Vader

was a 1994 hit for Irish band, the Cranberries

, from the album “No Need to Argue”

is a molasses pie, a specialty of the Pennsylvania Dutch

was the last of the Stuarts

to rule in the British Isles, and the first sovereign of the Kingdom of Great Britain (after England and Scotland united).
7 HOT: “Hot Rocks”

is a great, great album released by the Rolling Stones featuring all their hits from 1964-1971.
8 AMADIS: “Amadis de Gaula”

is a four-volume collection of knightly tales from Spain, of disputed origin.
11 ARGO: Jason and the Argonauts

sailed on the Argo to rescue the Golden Fleece

.
21 PANATELA: A panatela is a slim cigar.
24 PARDONER: The Pardoner’s Tale

is one of “The Canterbury Tales”

.
30 GRAIL: Percival is one of King Arthur’s Knights of the Round Table

, and was involved in the quest for the grail.
32 OIL: The Permian Basin is an oil and gas producing area covering much of Texas and New Mexico.
34 REL: Holy sisters study religion.
39 ARSENIC: A metalloid

is also known as a semi-metal. The metalloids are a group of elements that have physical and chemical properties of both metals and non-metals.
40 WALCOTT: Derek Walcott

is a poet, playwright and writer from Saint Lucia in the Caribbean.
41 HEC: “Hec Ramsey”

was a TV western starring Richard Boone aired in the early seventies.
50 PONES: Pones are southern cakes or bread made from maize.
54 FISK: Carlton “Pudge” Fisk

played for the Red Sox and White Sox (apparently!).
56 DEVI: Devi is the Sanskrit word for “goddess”, and Devi is in essence present in all Hindu goddesses.