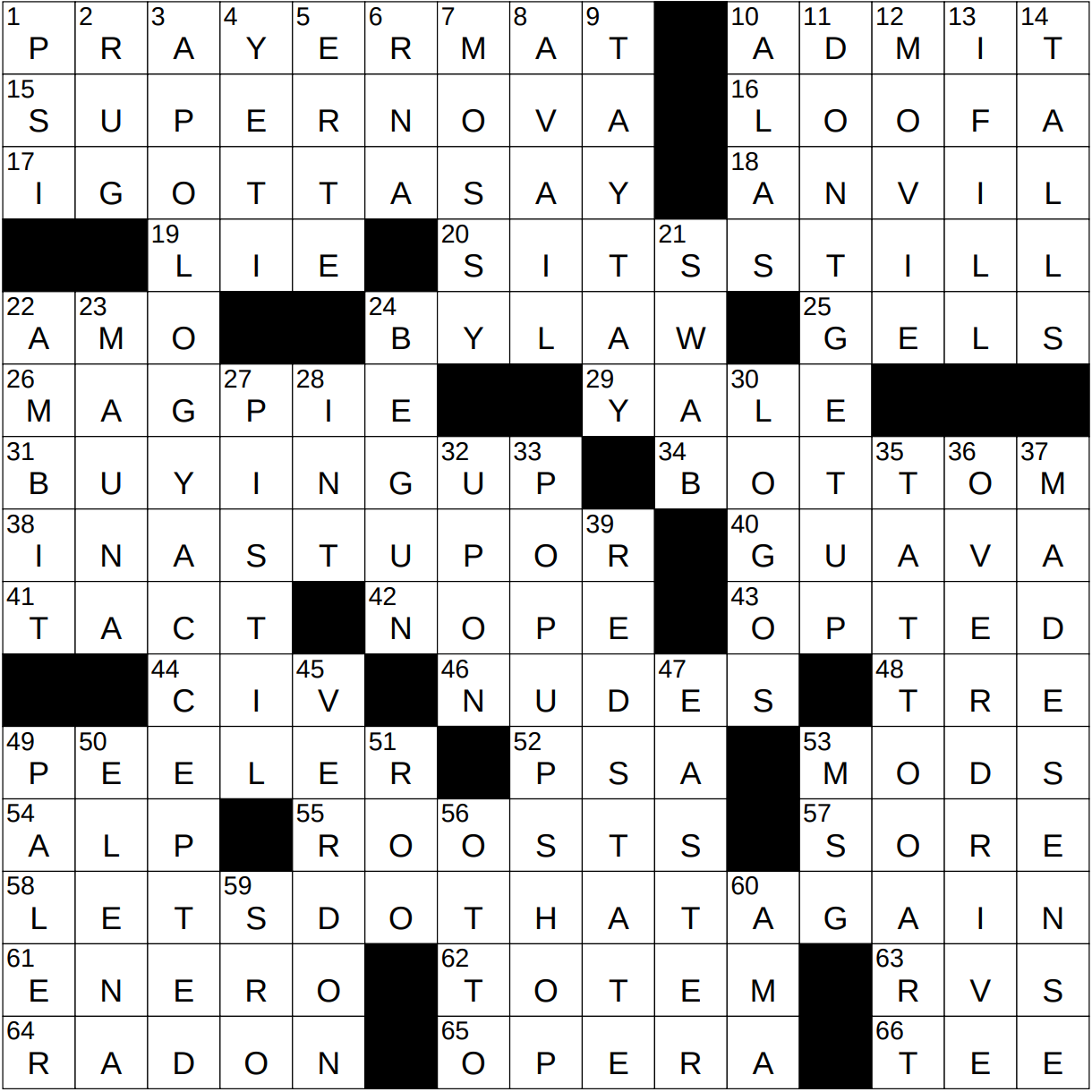 Constructed by: Brooke Husic and Hoang-Kim Vu
Edited by: Will Shortz

Eric Hoffer was a philosopher from the Bronx in New York, and the author of the much respected 1951 book “The True Believer”. The book examines the rise of totalitarian governments, such as those of Adolf Hitler in Germany and Joseph Stalin in Russia, and discusses how such regimes may have arisen and prospered in societies.

Gaius Valerius Catullus was a Latin poet active in the days of the Roman Republic. Here is the text of the poem “Catullus 85” that the Latin poet Catullus wrote for his lover “Lesbia” (a pseudonym):

These lines translate from Latin into English as:

I hate and I love. Why I do this, perhaps you ask.
I know not, but I feel it happening and I am tortured.

26 Bird that can recognize itself in a mirror : MAGPIE

The bird known as a “jay” is sometimes called a “magpie”, although the terms are not completely interchangeable.

40 Fruit in some agua fresca : GUAVA

The name “guava” applies to several tropical fruit species. The most frequently eaten species is the apple guava (also “common guava”). Almost half of the world’s guava is produced by India.

An agua fresca is a blended drink made with sugar and water flavored with fruit, cereal, flowers or seeds. Traditional aguas frescas are sold by street vendors, especially in Mexico and the American Southwest. Common flavorings are hibiscus and tamarind.

49 Tool in a mixologist’s set : PEELER

A mixologist is someone who is well versed in the mixing of cocktails, said he, reaching for the shaker …

54 One may have a name in Italian, German and French : ALP

An ambit is an outer boundary or limit, a circumference. The term “ambit” can also be used to mean the sphere or scope of influence. “Ambit” comes from the Latin “ambire” meaning “to go around”.

“Mauna” is a Hawaiian word meaning “mountain”, as in “Mauna Loa” and “Mauna Kea”.

27 Part of a flower’s gynoecium : PISTIL

The ovary of a flowering plant is part of the female reproductive organ, the gynoecium. When pollen lands on the gynoecium, it germinates and grows down into the ovary to fertilize an individual ovule within that ovary and form a seed.

Gwen Verdon was one of Broadway’s biggest stars, and an actress, singer and dancer. She is also famous for playing Lola in the 1958 movie adaptation of “Damn Yankees”, in which she sings the unforgettable “Whatever Lola Wants, Lola Gets”. Verdon’s second marriage was to celebrated choreographer Bob Fosse.