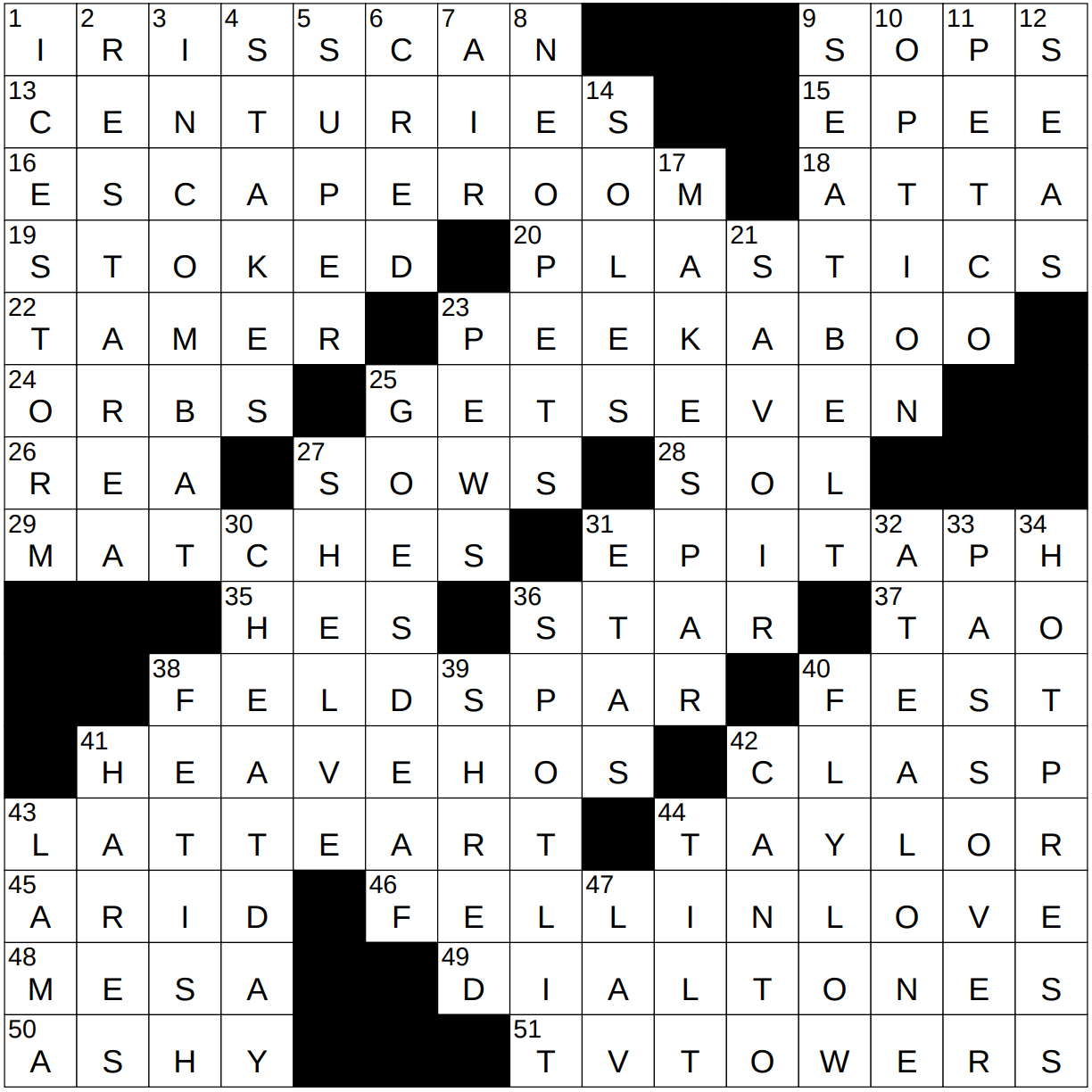 An iris scan is a method of biometric identification. It relies on the fact that the complex patterns in the irises are unique to an individual. Note that an iris scan differs from a retinal scan. The latter uses technology that scans the unique pattern of blood vessels in an individual’s retina.

15 Weapon with a point d’arrêt : EPEE

18 Flour ground in a chakki : ATTA

Chakki are grinding stones used to grind spices and grains for Indian cuisine.

Solfège (also “sol-fa”) is a teaching method used in the world of music. The technique involves the use of the sol-fa syllables for each note, and associating each syllable with a specific pitch.

31 Passage in a cemetery : EPITAPH

Our word “epitaph” ultimately comes from the Greek “epitaphion”, which translates as “funeral oration”.

Actor DeForest Kelley is best known for playing Bones McCoy in the original “Star Trek” cast. The show’s creator, Gene Roddenberry, originally offered Kelley the role of Spock, but Kelly refused it and so was given the part of the ship’s medical officer.

37 Mathematician Terence who won a Fields Medal at age 31 : TAO

38 Rock-forming mineral that makes up over half of the earth’s crust : FELDSPAR

The minerals known as feldspars are found in many types of rocks, and in fact make up about 60% of the earth’s crust. As a former ceramic engineer (for my sins), I can appreciate how important feldspars are in the manufacture of ceramics. Feldspars melt at relatively low temperatures and form essential glass phases in the final ceramic product.

The Preakness Stakes is a thoroughbred horse race that’s run at the Pimlico Race Course in Baltimore in May of each year. The Preakness is the second most popular horse race in the US in terms of attendance, after the Kentucky Derby. The race was given its name by former Maryland Governor Oden Bowie in honor of the racehorse named Preakness. Preakness won the inaugural Dixie Stakes that was run at Pimlico in 1870.

11 Its symbol is WOOF on Nasdaq : PETCO

Petco is a chain of retail stores that sells live animals and pet supplies. The Petco logo includes the two company mascots, Red Ruff the dog and Blue Mews the cat.

Flats are shoes with a very thin heel, or no neel at all.

A pew is a church bench, usually one with a high back. The original pews were raised and sometimes enclosed seats in the church used by women and important men or families. “Pew” comes from the Old French “puie” meaning “balcony, elevation”.

33 Time to read the Haggadah : PASSOVER

The Haggadah is an ancient Jewish text that is traditionally read aloud at the Passover seder. The Haggadah (“telling” in Hebrew) acts as a guide to the seder ritual, which commemorates the Israelites’ Exodus from Egypt.

At the beginning of the 19th century, fetishism was the worship of “fetishes”. Back then, a fetish was an object that was revered and considered to have mysterious powers. A few decades later, the usage of the term “fetish” was extended, probably by New England Transcendentalists such as Ralph Waldo Emerson and Henry David Thoreau, to describe an object of blind devotion. The concept of sexual fetishism arose at the end of the 19th century.

A canto is a section of a long poem. “Canto” is the Italian for “song”, and is a term first used by the Italian poet Dante.

In the Buddhist tradition, a bhikkhuni is a female monk. The male equivalent is a bhikkhu.