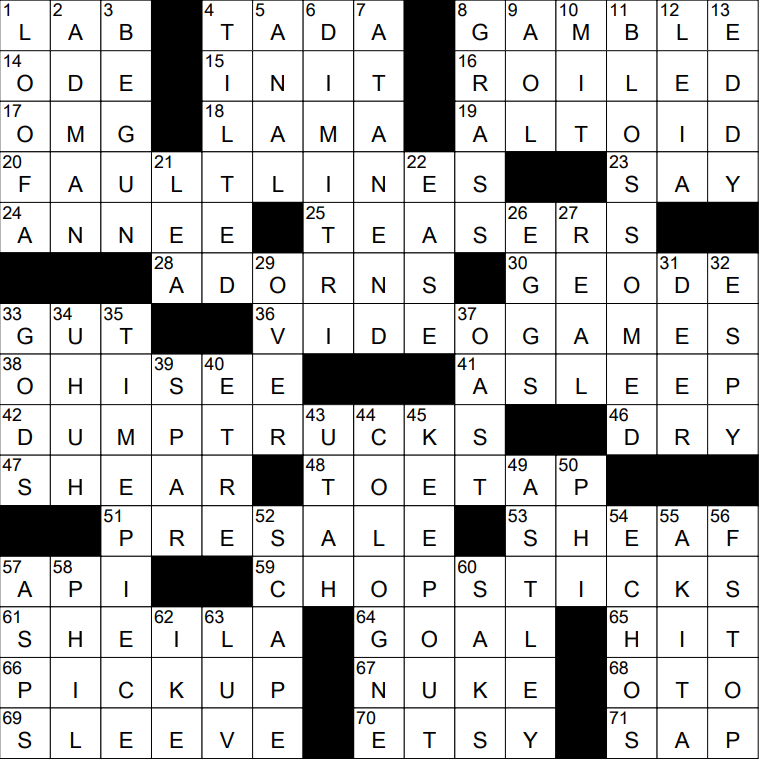 Constructed by: Rachel Simon
Edited by: Will Shortz

Themed answers each end with a word that often follows “PICK UP”:

The stretch of South Las Vegas Boulevard on which most of the big casinos are concentrated is referred to as the “Las Vegas Strip”. The Strip was named for LA’s Sunset Strip by former Los Angeles law enforcement officer Guy McAfee. McAfee was a notoriously corrupt head of the LAPD vice squad in the 1920s and 1930s who ran several brothels and gambling saloons. McAfee moved to Las Vegas in 1939 where he opened several casinos, including the Golden Nugget.

19 Alternative to a Tic Tac : ALTOID

Altoids breath mints have been around since 1780, when they were introduced in Britain. The famous tin in which Altoids are sold is often reused for other purposes. The most famous use is as a container for a mini-survival kit.

67 Throw in the microwave : NUKE

One might rewarm a meal by nuking it, by zapping it in the microwave.

“Anastasia” is an 1997 animated musical from Don Bluth and Gary Goldman. The storyline is based on the urban myth that Anastasia, the youngest daughter of Tsar Nicholas II, survived the family’s execution by the Bolsheviks in 1918. Anastasia is voiced by Meg Ryan, although when Anastasia sings, her voice is dubbed by Liz Callaway.

The iconic phrase “You’ve got mail” was first used by AOL in 1989. The greeting was recorded by voice actor Elwood Edwards. Edwards has parlayed his gig with AOL into some other work. He appears in an episode of “The Simpsons” as a doctor who says the line “You’ve got leprosy”. Edwards also worked as a weatherman for a while and got to use the line “You’ve got hail” …

44 Old Spice is a popular one : COLOGNE

49 Rick who sang “Never Gonna Give You Up” : ASTLEY

Rick Astley is an English singer best known for his 1987 worldwide hit “Never Gonna Give You Up”. He retired in 1993 but became a huge hit on the Internet in 2007 when a YouTube video of “Never Gonna Give You Up” was chosen by tricksters as a link (labeled as something else) that was sent around the world so that the clip was seen by millions online. The phenomenon was given the name “Rickrolling”. With all the new exposure that the song received Astley made a whopping $12 in royalties from YouTube. Yep, 12 whole dollars.

English musician Phil Collins is best known for his work as drummer with the rock group Genesis, as well as for his solo career. In fact, Collins is often grouped with Paul McCartney and Michael Jackson, two other artists who had tremendous solo success after careers with very well-known bands.