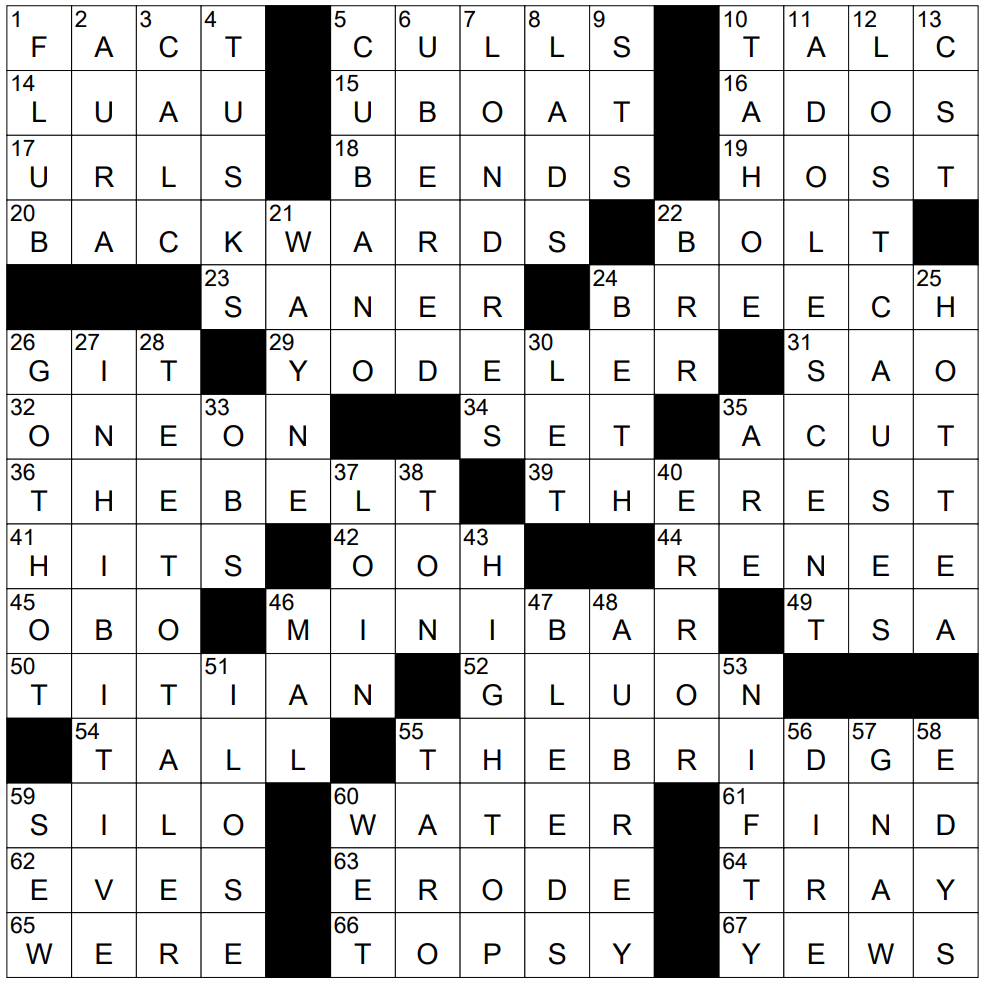 Constructed by: Meredith Colton Hazy
Edited by: Will Shortz

Themed answers are each in two parts. The relative position of each part in the grid is used to give the full answer:

1 Basis of a trivia question : FACT

To cull is to pick out the best, get rid of the rejects.

The metamorphic rock known as soapstone or steatite has a myriad of uses, largely because it is relatively soft. It feels quite soapy to the touch, hence the name “soapstone”. It can be used for making countertops, or as a medium for artistic and decorative carving. It’s also used by tailors as a marking tool on cloth.

45 “The price is negotiable,” in classified ads : OBO

Titian was an Italian painter and a founding member of the Venetian School of the 16th century. His most famous work is probably “Assumption of the Virgin”, which was commissioned for the Basilica di Santa Maria Gloriosa dei Frari in Venice and which can be seen there on the high altar to this very day.

A gluon is a hypothetical, subatomic particle postulated as being necessary to bind (or “glue”) together quarks, hence the name “gluon”.

The prefix “were-” as in “werewolf” derives from an old word “wer” meaning “man”. Hence a werewolf is a “man-wolf”.

Yew is the wood of choice for the longbow, a valued weapon in the history of England. The longbow is constructed with a core of yew heartwood (as the heartwood resists compression) that has a sheath of yew sapwood (as the sapwood resists stretching). The yew was in such demand for longbows that for centuries yew trees were in short supply in Britain and the wood had to be imported from all over Europe.

3 Class with integrals, for short : CALC

Walruses are large marine mammals with very prominent tusks. Their natural habitat is in and around the northern hemisphere’s Arctic Ocean.

In Spanish, “la capital de Inglaterra” (the capital of England) is “Londres” (London).

10 Vehicle named after a lake : TAHOE

The Chevrolet Blazer SUV was renamed, and is now known as the Chevy Tahoe. And, the GMC Yukon is basically the same car. All very confusing …

Bruce Wayne is the secret identity of Batman in the comic series created by DC Comics. The first name of Bruce was chosen as a homage to the Scottish king and heroic figure, Robert the Bruce. The family name was a nod to “Mad Anthony” Wayne, the US Army general and statesman who rose to prominence in the Revolutionary War.

In Latin, the word for midwife is “obstetrix”. “Obstetrix” translates more literally as “one who stands opposite” i.e. the one opposite the woman giving birth. The Latin term gives rise to our modern word “obstetrics” used for the branch of medical science concerned with childbirth.