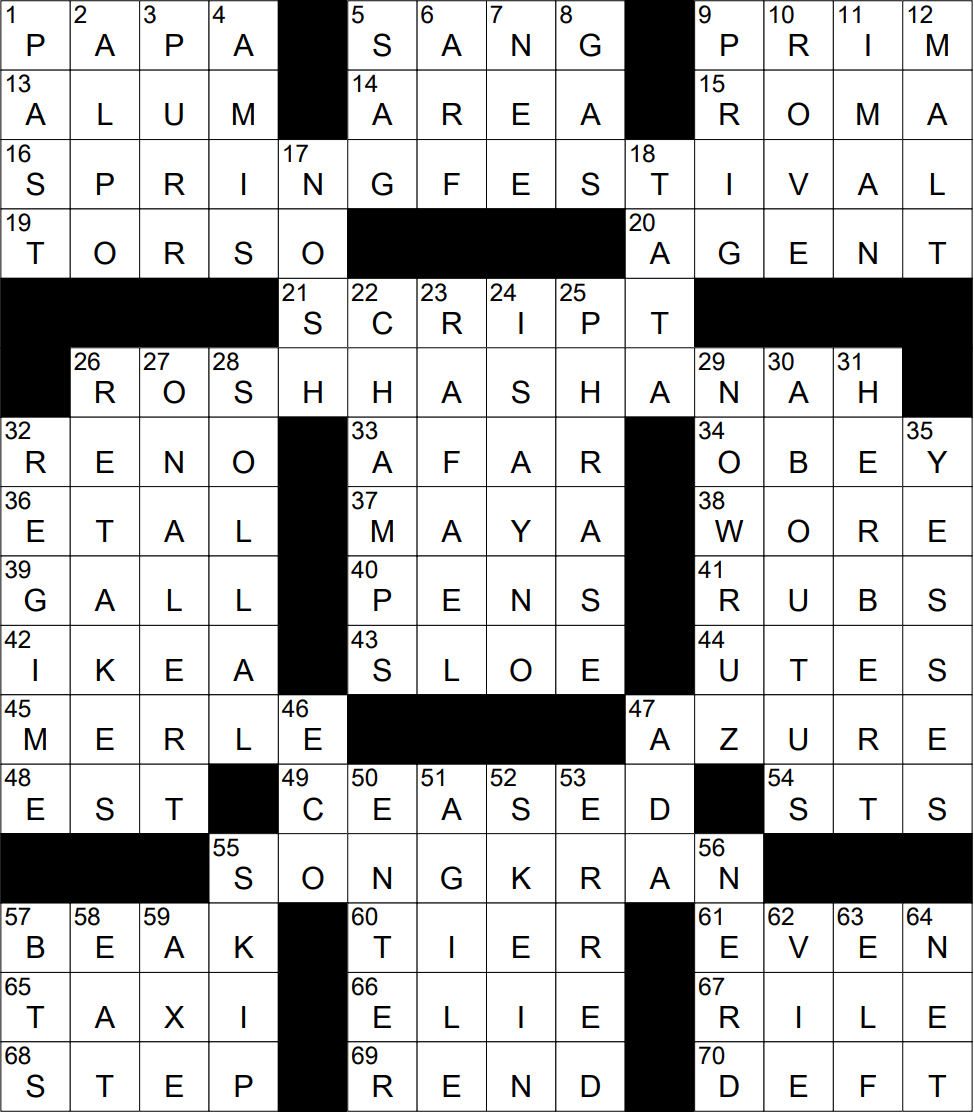 Themed answers are New Year celebrations around the world:

14 Algeria has the largest one among African countries : AREA

Algeria is a huge country, the largest in Africa, and the largest country on the Mediterranean. The capital of Algeria is Algiers, and the country takes its name from the city.

Rosh Hashanah is loosely referred to as “Jewish New Year”. The literal translation from Hebrew is “head of the year”.

“The Good Place” is a fantasy-comedy TV show about a woman who wakes up in the afterlife. The woman is played by Kristen Bell, and the afterlife is a heaven-like utopia designed by Michael, an immortal architect portrayed by Ted Danson. I haven’t seen this one …

The Greek word “stadion” was a measure of length, about 600 feet. The name “stadion” then came to be used for a running track of that length. That “running track” meaning led to our contemporary term “stadium” (plural “stadia”).

Elie Tahari is an American fashion designer, although he was born in Jerusalem. Tahari immigrated to the US from Israel in 1971 and started work as an electrician in the Garment District in New York City. It was there that he became interested in fashion.

I suppose the successful English novelist Martin Amis must have writing in his blood. He is the son of the respected author Kingsley Amis, a Booker Prize winner. Martin Amis’s best-known novels comprise his so-called “London Trilogy” consisting of “Money” (1984), “London Fields” (1989) and “The Information” (1995).

Mogadishu is a major port city on the east coast of Africa, and is the capital of Somalia. The city is known locally as “Xamar”.

Malt is germinated cereal grains that have been dried. The cereal is germinated by soaking it in water, and then germination is halted by drying the grains with hot air.

“Tourney” is another word for “tournament”. The term comes from the Old French word “tornei” meaning “contest of armed men”, from “tornoier” meaning “to joust, jilt”.

31 President between Calvin and Franklin : HERBERT

President Calvin Coolidge, the only US President to have been born on July 4th, was known as a man of few words. It was while he was serving as US Vice President, in the administration of Warren G. Harding, that Coolidge earned the nickname “Silent Cal”. There are a couple of anecdotes about Coolidge that illustrate his renowned reticence. The first involves a lady sitting beside the president at dinner one evening who remarked to him, “Mr. Coolidge, I’ve made a bet against a fellow who said it was impossible to get more than two words out of you.” His famous reply was, “You lose.” A second tale recalls the comment made by poet Dorothy Parker in 1933 when she heard that Coolidge had just died. She inquired archly, and perhaps a little coldly, “How could they tell?”

Quite often, the terms “regime” and “regimen” seem to be used interchangeably. In contemporary usage, “regime” is applied more generally, and “regimen” more specifically. A “regimen” is a systematic approach that one might apply to something, to exercise or diet for example. The term “regime” can also be used in such contexts, but can have additional definitions, such as “government in power”. A form of government cannot be described as a “regimen”.

An acrobat is someone who performs gymnastic feats. The term “acrobat“ comes into English via French from the Greek “akrobatos” meaning “going on tip-toe, climbing up high”.