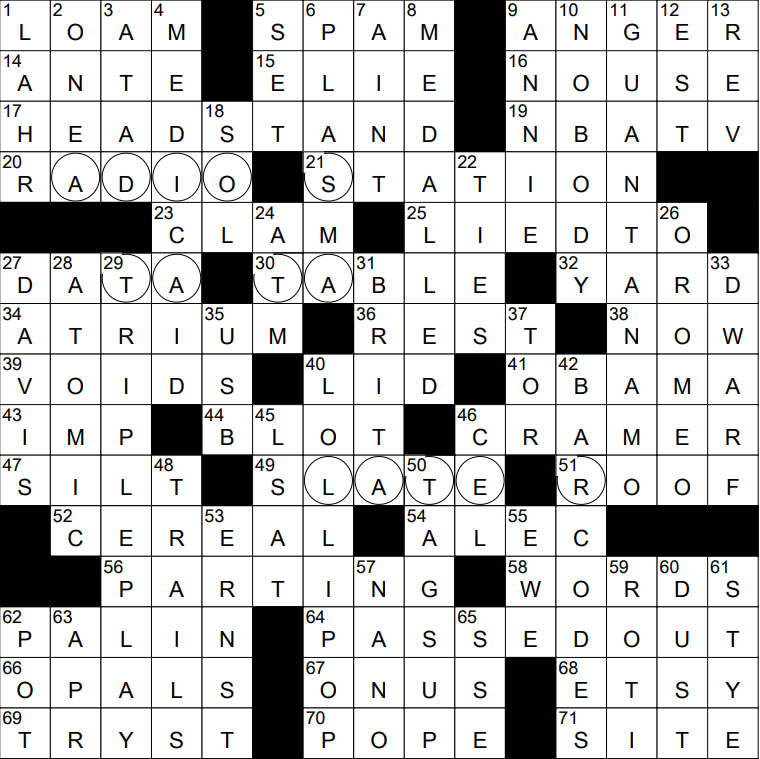 5 Send too many emails : SPAM

27 With 30-Across, numbers displayed in rows and columns : DATA …

A hellion is a mischievous and wild person. “Hellion” is a North American term, one probably derived from the word that we use for the same thing on the other side of the Atlantic, namely “hallion”.

The television show “Mad Money” started airing in 2005, and is hosted by the ebullient Jim Cramer. Cramer recommends that essential funds, such as those reserved for retirement, be safely locked away in conservative investment vehicles. Any money left over (still looking for that here!) is classed as “Mad Money” and can be invested in more risky stocks.

10 Fake name given by Odysseus to the Cyclops : NOBODY

Actress Viola Davis is probably best known on the small screen for playing the lead in the drama “How to Get Away with Murder”. On the big screen, I’d say that her most famous role is the starring role in the 2011 film “The Help”.

37 Home of the Raptors, on scoreboards : TOR

The Raptors are an NBA basketball team based in Toronto, Ontario. The franchise was founded, along with the Vancouver Grizzlies, when the NBA expanded into Canada in 1995. However, the Grizzlies moved to Memphis in 2001, leaving the Raptors as the only Canadian member of the league. The selection of the name “Raptors” in 1995 was strongly influenced by the popularity of the movie “Jurassic Park in the mid-nineties.

40 Something to lick on a stick : LOLLIPOP

50 Touches base before running home, say : TAGS UP

What we call “dust bunnies” in American English, have similar inventive names in other languages. The Finns know them as sheep, the Germans wool mice, the Hungarians dust kittens, the Italians dust cats, and the Swedish dust rats.

63 Figure that a bank charges for a loan, for short : APR