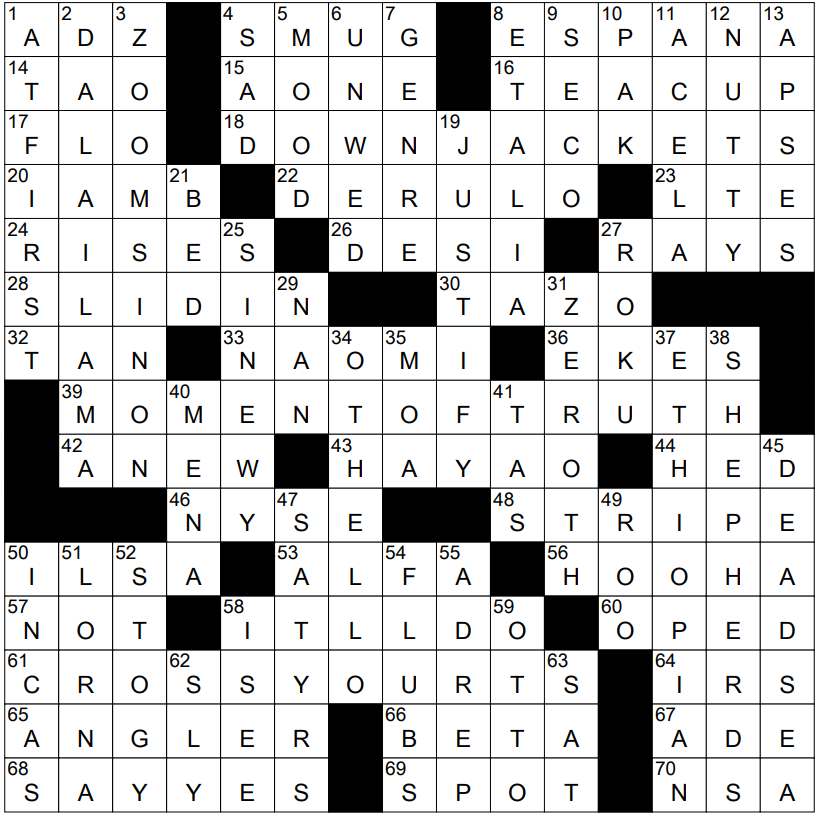 Every apparent letter “l” in the clues is really a letter “t”, because we forgot to CROSS OUR TS. Very clever …

“Jason Derulo” is the stage name of singer Jason Desrouleaux from Miramar, Florida.

In the world of telecommunications, the initialism LTE stands for Long-Term Evolution, and is wireless broadband communication standard. In general terms, LTE improves broadband speeds. As I understand it, LTE technology allows a 3G network to perform almost as well as a true 4G network, and so LTE is sometimes marketed as 4G LTE, even though it’s really “3G plus”.

Desi Arnaz has two stars on the Hollywood Walk of Fame. One was placed to mark his contribution to motion pictures, and the other for his work in television.

The New York Stock Exchange (NYSE) is nicknamed the “Big Board”.

53 Preceder of Romeo or Bravo : ALFA

Edward Snowden is a former NSA contractor who leaked several top secret NSA documents to the media beginning in June 2013. After disclosing his name as the source of the leaks, Snowden tried to seek asylum in Ecuador. While traveling to Ecuador he had a layover in Moscow. While in Moscow, the US government revoked his passport, which effectively left him stranded in the transit area of Moscow Airport. The Russian government eventually granted him annually-renewable temporary asylum.

5 Kind of ring or music : MOOD

In Spain, one might drink “vino seco” (dry wine).

The famous university city of Cambridge in England takes its name from an Old English term meaning “Bridge on the River Granta”. The river in question is now called the River Cam, with “Cam” being a back formation from “Cambridge”.

Ethiopia holds an important position within the nations of Africa, with the capital of Addis Ababa being home to many international organizations that are focused on the continent.

45 Some of Jordan’s border : DEAD SEA