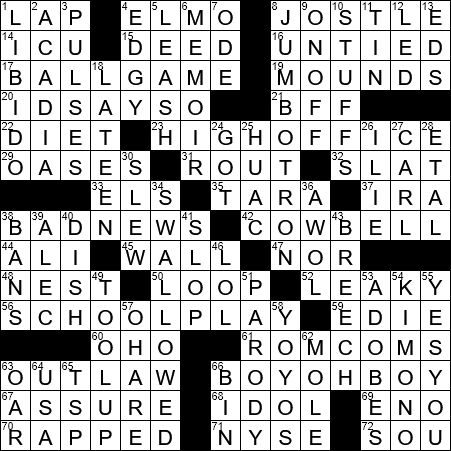 Themed answers each comprise two parts, both of which are types of BOY:

“Take Me Out to the Ball Game” is a 1908 song that is traditionally sung during the seventh inning stretch of a baseball game. Even though the song is now inextricably linked to baseball, neither of the two composers had ever been to a game before they wrote it.

The Game Boy is a hugely successful handheld video game player that was released in 1989 by Nintendo. I remember that my kids were so eager to get hold of the devices when they first came out that I bought a couple of them in a Japanese railroad station, while over there on a business trip.

The roots of the New York Stock Exchange (NYSE) go back to 1792 when a group of 24 stock brokers set up the New York Stock & Exchange Board. They did so in an agreement signed under a buttonwood tree outside 68 Wall Street. That document became known as the Buttonwood Agreement. Today, the NYSE is located in a National Historic Landmark building with the address 11 Wall Street in Lower Manhattan, New York City.

Acadia National Park in Maine was created in 1919, although back then it was called Lafayette National Park in honor of the Marquis de Lafayette who famously supported the American Revolution. The park was renamed to Acadia in 1929.

8 Giant-sized TV, as in a stadium : JUMBOTRON

53 Homes made of sun-dried bricks : ADOBES