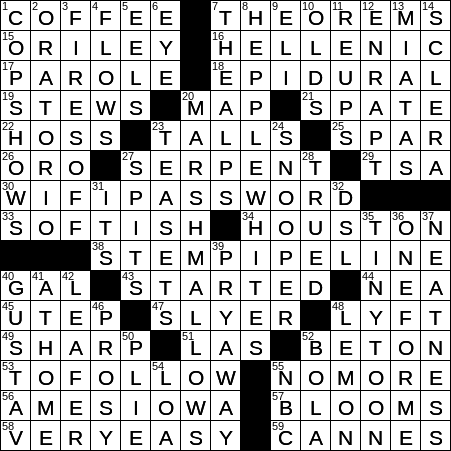 Dan Blocker was the actor who played Eric “Hoss” Cartwright in the Western TV series “Bonanza”. Hoss was the “slow” character on the show. Paradoxically, Dan Blocker was the most-educated member of the cast, having earned a master’s degree in the dramatic arts. Blocker passed away while “Bonanza” was still running. He was undergoing relatively routine gallbladder surgery and developed a pulmonary embolism which killed him. Bonanza ran for just one more season after Blocker passed away.

The doubloon was a Spanish gold coin worth two escudos. The name comes from the Spanish “doblón”, which means “double”.

34 Sam who won at the Battle of San Jacinto : HOUSTON

Sam Houston was the first President of the Republic of Texas, a US Senator for Texas, and governor of the state. Houston was also Governor of Tennessee in his earlier life and is the only person in US history to have been governor of two different states. The city of Houston is named for Sam, and the nearby city of Huntsville boasts a statue of Houston that’s the largest freestanding statue of any American.

38 Metaphorical source of the next generation of coders and researchers : STEM PIPELINE

Gran Canaria, or Grand Canary Island, may be grand but it isn’t quite as big as Tenerife, the largest island of the group and the most populated. The capital of Gran Canaria is Las Palmas, which was a port of call for Christopher Columbus in 1492 on his way to the Americas.

59 City in Fitzgerald’s “Tender Is the Night” : CANNES

“Tender Is the Night” is a novel by F. Scott Fitzgerald that was adapted into a 1962 film starring Jennifer Jones, Jason Robards and Joan Fontaine.

2 Stravinsky’s “Oedipus Rex,” for one : ORATORIO

7 Home to Blofeld’s lair in “On Her Majesty’s Secret Service” : THE ALPS

“On Her Majesty’s Secret Service” is the sixth of the James Bond series films, and the only one to star George Lazenby in the leading role. He wasn’t a great choice for 007 …

20 Pac-Man and the ghosts, in Pac-Man cereal : MARSHMALLOWS

23 Collections dating back to the Han dynasty : TEA SETS

40 Name shared by the composers Holst and Mahler : GUSTAV

Long before we associated the term “lemon” with a defective car, it was used to describe defective items in general.