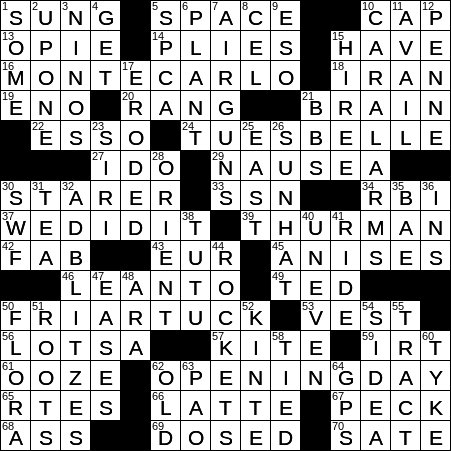 Themed answers OPEN with DAYS of the week:

21 Scarecrow’s desire in “The Wizard of Oz” : BRAIN

The movie “The Wizard of Oz” is full of irony. The Scarecrow wants to be intelligent and discovers he is already very smart. The Tin Man wants to be able to love and finds out that he already has a heart. The Lion thinks he is a coward but turns out to be fearless. And the big reveal is that the Wizard of Oz, who is positioned as all-powerful, is actually just a bumbling and eccentric old man.

Nausea is a sick feeling in the stomach. The term derives from the Greek “naus” meaning “ship”. Originally, “nausea” was associated only with seasickness.

Uma Thurman started her working career as a fashion model, at the age of 15. She appeared in her first movies at 17, with her most acclaimed early role being Cécile de Volanges in 1988’s “Dangerous Liaisons”. Thurman’s career really took off when she played the gangster’s “moll” in Quentin Tarantino’s “Pulp Fiction” in 1994. My favorite of all Thurman’s movies is “The Truth About Cats & Dogs”, a less acclaimed romcom released in 1996. She took a few years off from acting from 1998 until 2002 following the birth of her first child. It was Tarantino who relaunched her career, giving her the lead in the “Kill Bill” films.

43 Where Slovakia and Slovenia are: Abbr. : EUR

Friar Tuck is a character who appears in the legends of Robin Hood. Tuck is a jovial man, found of his food and wine, and a member of Robin’s merry band of outlaws.

62 Start of the baseball season … or what the start of each starred clue is? : OPENING DAY

67 Fraction of a bushel : PECK

23 Voice of the Apple Watch : SIRI

The Apple Watch was announced in 2014 and started shipping in 2015. The device works as an extension to a user’s smartphone, although it also has capabilities of its own. I’m not a big fan of smartwatches; I really don’t see the point …

Tchaikovsky’s “The Nutcracker” is one of the most popular ballets in the repertoire, although that popularity really only emerged in the late sixties. It’s “must-see ballet” during the Christmas holidays.