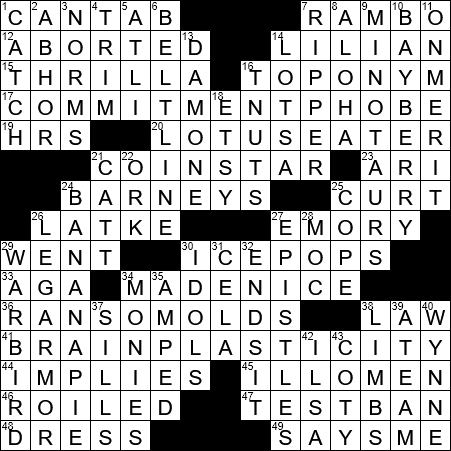 The term “Cantabrigian” is used for things pertaining to the city of Cambridge. Often, the term is narrowed to refer to things associated with Cambridge University in particular. “Cantabrigian” comes from the Latin “Cantabrigia”, the medieval name for the city, from the Anglo-Saxon name “Cantebrigge”. The term is frequently shortened to “Cantab”.

Lilian Jackson Braun was the author of the “The Cat Who” series of mystery novels. The main characters in the stories are an ex-reporter named James Qwilleran and his Siamese cats called KoKo and Yum-Yum.

16. Champagne is one : TOPONYM

The lotus-eaters were a race of people that featured in Greek mythology. The lotus flowers and fruits that were consumed were supposedly narcotic and addictive, and so the lotus-eaters enjoyed a life largely asleep in peaceful apathy.

Ari Gold is a fictional character in the HBO series “Entourage”. “Entourage” tells the story of a rising film star, Vincent Chase (played by Adrian Grenier), a native of New York but now learning to handle himself in Hollywood. Vincent’s Hollywood agent is Ari Gold, played by Jeremy Piven.

A latke is a delicious potato pancake (I’m Irish … so anything made with potato is delicious!).

Ransom Eli Olds was a pioneer in the automotive industry, and the founder of the Oldsmobile and REO brands. Olds introduced the first modern stationary assembly line (Henry Ford’s famous innovation was the moving assembly line).

Atli is a character in the Volsunga Saga of 13th century Icelandic lore. It is believed that the Atli character is loosely based on Attila the Hun. According to myth, Atli was murdered by his wife Gudrun.

Jack the Ripper was one of the names given to a serial killer who terrorized the Whitechapel district of London in 1888. The murders were particularly gruesome, and were all directed towards female prostitutes that worked in the area. The victims had their throats cut and then had their abdominal organs mutilated and sometimes removed. Eleven women were killed, and the murderer was never apprehended.

A sobriquet is an affectionate nickname. “Sobriquet” is French for “nickname”.

“Aloha from Hawaii” was a concert broadcast in 1973, live from Honolulu, with Elvis Presley as the headline act. The show cost $2.5 million to produce, making it the most expensive entertainment special up to that time. It was aired in over 40 countries worldwide and to this day it holds the record for being the most-watched broadcast by a single entertainer. The album containing music from the show was also a big hit, the first chart-topping album for Elvis since 1965.

Minos was the King of Crete in Greek mythology, and the son of Zeus and Europa. Minos had an elaborate labyrinth built under the island, designed by the architect Daedalus and his son Icarus (who famously died trying to escape from the island by “flying” away). In the labyrinth, King Minos kept the Minotaur, a dreadful creature with the head of a bull on the body of a man.

Vic Damone is a singer from Brooklyn, New York. As a young man Damone started taking voice lessons, inspired by his favorite singer, Frank Sinatra. Decades later, Sinatra said that Damone had “the best pipes in the business”.

“Mork & Mindy” is a sitcom that originally aired from 1978 to 1982. The title characters were played by Robin Williams and Pam Dawber. Mork is an alien from the planet Ork who reports back to his superior called Orson. Orson is played by voice actor Ralph James. Ralph James was also known for providing the voice of Mr Turtle in famous Tootsie Pop commercials in the seventies. Nanu nanu!

By definition, an epistle is a writing sent by one person to a group of people, with the name “epistle” coming from the Greek word for “a letter”. The 21 epistles of the New Testament are letters from various of the Apostles to groups of Christians, with most of them being written by Paul.

Warbirds are vintage military aircraft that are operated by civilian organizations, often at airshows.

Fox’s “American Idol” is a spin-off show that was created after the amazing success of the British television show “Pop Idol”. Neither program(me) would be my cup of tea …

“Sill plate” or simply “sill” is an architectural term for a bottom horizontal member to which vertical members are attached. A windowsill is a specific sill plate that is found at the bottom of a window opening.

Detritus is the loose material that results from the process of erosion. The usage of the term has evolved to man any accumulated material or debris. “Detritus” is Latin for “a wearing away”.

16. Champagne is one : TOPONYM

17. One difficult to tie down : COMMITMENTPHOBE

25. Short but not necessarily sweet : CURT