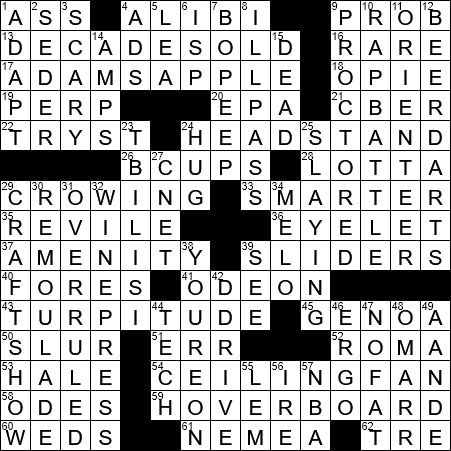 Today’s Wiki-est, Amazonian Googlies
Across
4. One may be cast-iron : ALIBI
“Alibi” is the Latin word for “elsewhere” as in, “I claim that I was ‘elsewhere’ when the crime was committed … I have an ‘alibi’”.

17. What can’t hold still during lectures? : ADAM’S APPLE
The voice box or larynx is where pitch and volume of sound are manipulated when we talk. The structure called the Adam’s apple that protrudes from the human neck is formed by the thyroid cartilage that surrounds the larynx. The Adam’s apple of males tends to increase in size during puberty, so the feature tended to be associated more with males in days gone by, perhaps leading to the name “Adam’s” apple.

18. 1960s TV character who says “Aw, shucks” : OPIE
Opie Taylor is the character played by Ron Howard on “The Andy Griffith Show”. Opie lives with widowed father Andy Taylor (played by Andy Griffith) and his great-aunt Beatrice “Aunt Bee” Taylor (played by Frances Bavier). Ron Howard first played the role in 1960 in the pilot show, when he was just 5 years old. Howard sure has come a long way since playing Opie Taylor. He has directed some fabulous movies including favorites of mine like “Apollo 13”, “A Beautiful Mind” and “The Da Vinci Code”.

19. Kind of walk : PERP
When a crime suspect in the custody of the police is walked through a public place, often to and from a courthouse, it is known as a “perp walk”.

21. Bear trap fearer : CBER
In the world of CB radio, a bear trap is a police speed trap.

A CBer is someone who operates a citizens’ band (CB) radio. In 1945, the FCC set aside certain radio frequencies for the personal use of citizens. The use of the Citizens’ Band increased throughout the seventies as advances in electronics brought down the size of transceivers and their cost. There aren’t many CB radios sold these days though, as they have largely been replaced by cell phones.

22. Intriguing meeting : TRYST
In its most general sense, a tryst is a meeting at an agreed time and place. More usually we consider a tryst to be a prearranged meeting between lovers. The term comes from the Old French “triste”, a waiting place designated when hunting. Further, a tryst taking place at lunchtime is sometimes referred to as a nooner.

29. Braggadocio : CROWING
A “braggadocio” is one who brags. The term was coined by poet Edmund Spenser in his epic poem “The Faerie Queene”. One of the characters in the poem is a comic knight who is prone to bragging, someone Spenser names “Braggadocchio”.

37. Free Wi-Fi, e.g. : AMENITY
“Wi-Fi” is nothing more than a trademark, a trademark registered by an association of manufacturers of equipment that use wireless LAN (Local Area Network) technology. A device labeled with “Wi-Fi” has to meet certain defined technical standards, basically meaning that the devices can talk to each other. The name “Wi-Fi” suggests “Wireless Fidelity”, although apparently the term was never intended to mean anything at all.

39. Little beefs? : SLIDERS
Sliders are small hamburgers. One suggestion is that the “slider” originated in the US Navy, with the name being a reference to greasy hamburgers sliding back and forth across the grill as a ship pitches and rolls. More recently, the slider became associated with the White Castle fast food chain of restaurants. White Castle introduced the “Slyder” in 1985.

40. Links words : FORES
No one seems to know for sure where the golfing term “fore!” comes from. It has been used at least as far back as 1881, and since then has been called out to warn other golfers that a wayward ball might be heading their way. My favorite possibility for its origin is that it is a contraction of the Gaelic warning cry “Faugh a Ballagh!” (clear the way!) which is still called out in the sport of road bowling. Road bowling is an Irish game where players bowl balls along roads between villages, trying to reach the end of the course in as few bowls as possible, just like in golf!

41. Ancient theater : ODEON
In Ancient Greece an odeon (also “odeum”) was like a small theater, with “odeon” literally meaning a “building for musical competition”. Odea were used in both Greece and Rome for entertainments such as musical shows and poetry readings.

45. Largest Italian seaport : GENOA
Genoa is a seaport in the very north of Italy, in the region known as Liguria. One of Genoa’s most famous sons was Christopher Columbus. Another was the violinist Niccolò Paganini.

50. Score symbol similar to a tie : SLUR
That would be a musical score.

53. In prime condition : HALE
Both the words “hale” and “healthy” derive from the Old English “hal” meaning healthy.

58. Certain Confucian compilation : ODES
The sayings of the Chinese philosopher Confucius (anglicized from “K’ung Fu-Tse”) are collected in a work called “The Analects” or “Linyu”. It wasn’t Confucius who wrote down his thoughts though, but rather his pupils, some 40 or so years after his death in 479 BC.

61. Site of Hercules’ first labor : NEMEA
“The Twelve Labors of Hercules” is actually a Greek myth, although Hercules is the Roman name for the hero that the Greeks called Heracles. The first of these labors was to slay the Nemean Lion, a monster that lived in a cave near Nemea. Hercules had a tough job as the lion’s golden fur was impenetrable to normal weapons. One version of the story is that Hercules killed the lion by shooting an arrow into its mouth. Another version says that Hercules stunned the monster with a club and then strangled him with his bare hands.

Down
2. Hours-long meal : SEDER
The Passover Seder is a ritual feast that marks the beginning of the Jewish Passover holiday, celebrating the liberation of the Israelites from slavery in Egypt. One of the traditions at the meal is that the youngest child at the table asks “The Four Questions”, all relating to why this night is different from all other nights in the year:

5. Gamboling place : LEA
“Gambol” is a such a lovely word, meaning to frolic and leap about.

6. Connection letters : ISP
An Internet Service Provider (ISP) is just what the name indicates, a company that provides its customers with access to the Internet. One way that ISPs differentiate themselves from each other is in the way in which end users are connected to the ISP’s network. So, there are cable ISPs, DSL ISPs, dial-up ISPs and satellite ISPs.

7. Nursery rhyme girl : BO PEEP
The lines that are most commonly quoted for the rhyme about “Little Bo Peep” are:

9. Supervised : PROCTORED
A “proctor” is a supervisor, especially of an examination in a school, or perhaps of a dormitory. The word “proctor” originated in the late 1500s, a contraction of the word “procurator”, the name given to an official agent of a church.

10. Climactic scene in the Eminem film “8 Mile” : RAP BATTLE
The movie “8 Mile” stars Eminem as a young rap artist in Detroit, and feature the song “Lose Yourself” that was performed and written by Eminem. The song won Eminem the 2002 Oscar for Best Original Song, making him the first rap artist to be so honored.

12. Pub game : BEER DARTS
Darts is a wonderful game that’s often played in English and Irish pubs, even over here in America. The scoring in a traditional game of darts is difficult to describe in a sentence or two, but the game of darts called “Round the Clock” is simply hitting the numbers 1 through 20 in sequence.

14. Concert lineup : AMPS
An electric guitar, for example, needs an amplifier (amp) to take the weak signal created by the vibration of the strings and turn it into a signal powerful enough for a loudspeaker.

27. Site that reviews 44-Down products : CNET
(44D. See 27-Down : TECH)
c|net is an excellent technology website. c|net started out in 1994 as a television network specializing in technology news. The host of “American Idol”, Ryan Seacrest, started off his career as host of a c|net show.

30. Cousin of tartar sauce : REMOULADE
Tartar sauce is basically mayonnaise with some chopped pickles, capers and onion or chives. The recipe was invented by the French (as “sauce tartare”) with the name somehow linked to the Tatars, a people who once occupied Ukraine and parts of Russia.

48. Astrologer known for annual forecast books : OMARR
Sydney Omarr was an astrology consultant to the rich and famous, and author of a horoscope column that appeared in the Los Angeles Times. While Omarr (real name Sidney Kimmelman) was in the US Army he even wrote a horoscope column for “Stars and Stripes”. He claimed that he got the job of writing for “Stars and Stripes” after having giving a consultation to President Franklin D. Roosevelt.

49. “Storage Wars” channel : A AND E
“Storage Wars” is a reality TV show about buyers looking for great deals when storage lockers are opened due to non-payment of rent.

55. Historic vehicle, briefly : LEM
In the Apollo program, the Lunar Excursion Module (LEM) was the vehicle that actually landed on the moon and returned the astronauts to the command module that was orbiting overhead. The third LEM built was named “Spider”, and it participated in the Apollo 9 mission which tested the functionality of the LEM design in space. The fourth LEM was called “Snoopy” and it flew around the moon in the Apollo 10 mission, the dress rehearsal for the upcoming moon landing. Apollo 11’s LEM was called “Eagle” and it brought Neil Armstrong and Buzz Aldrin to and from the moon’s surface. Another famous LEM was Apollo 13’s Aquarius. Although Aquarius never landed on the moon, it did serve as a “lifeboat” for the three astronauts after the explosive rupture of an oxygen canister in the Service Module.

56. Dudgeon : IRE
“Dudgeon” is a noun describing a state of sullen, ill humor.