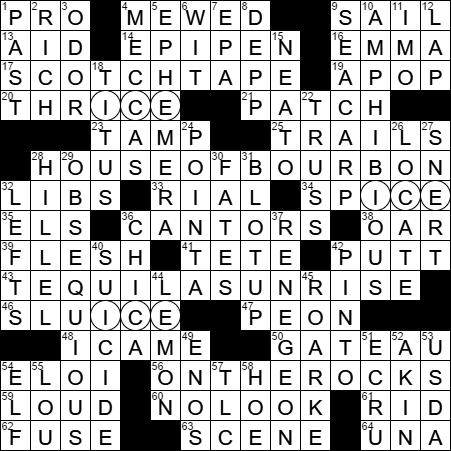 CROSSWORD SETTER: Timothy Polin
THEME: On the Rocks
Today’s themed answers each contain the name of an alcoholic drink. Those drinks are “served” over ICE (“on the rocks”). The letters ICE are circled in the grid, under the name of each drink:

56A. How this puzzle’s three drinks have been served? : ON THE ROCKS

28A. French royal line : HOUSE OF BOURBON
34A. Cardamom or turmeric : SPICE

43A. Cocktail usually served with an orange slice and a cherry : TEQUILA SUNRISE
46A. Sloping water trough : SLUICE

14. Allergy sufferer’s lifesaver : EPIPEN
EpiPen is a brand name of epinephrine auto-injector. An EpiPen delivers a measured dose of epinephrine, usually for the treatment of an allergic reaction.

16. Title heroine who says “I would much rather have been merry than wise” : EMMA
Jane Austen’s novel “Emma” is the tale of Emma Woodhouse and the wonderful George Knightley. At the end of the story, Emma marries Knightley and her young friend Harriet marries Robert Martin, who had been trying to get Harriet’s attention practically from page one of the novel!

23. Pack (down) : TAMP
“To tamp” means to pack down tightly by tapping. “Tamp” was originally used to specifically describe the action of packing down sand or dirt around an explosive prior to detonation.

28. French royal line : HOUSE OF BOURBON
The House of Bourbon is a royal house in Europe that ruled France right up until the French Revolution. Famous French kings such as Louis XIV and Louis XVI all belonged to the House of Bourbon.

32. Mad ___ : LIBS
Mad Libs is a word game, mostly played by children in America. The idea is that one player provides a list of words which are then inserted into blank spots in a story, usually with hilarious results (they say!).

33. Omani money : RIAL
“Rial” is the name of the currency of Oman (as well as Yemen, Iran, Cambodia and Tunisia).

34. Cardamom or turmeric : SPICE
The spice known as cardamom comes from the seeds of several plants that are native to India. Those plants were introduced to Guatemala in the early 20th century, and now Guatemala produces and exports more cardamom than even than any country in the world, even India. Cardamom is the third-priciest spice on the market today by weight, after vanilla and saffron.

Turmeric is a plant in the ginger family that is native to southeast India. The rhizomes, modified underground stems, of turmeric are often boiled, dried and ground into the orange-yellow spice called turmeric. Turmeric is a common ingredient in curries, and also in mustard to which it imparts a yellow color.

36. Synagogue singers : CANTORS
“Canto” is the Latin word for “singer”. In some religious traditions, a “cantor” is the person assigned to lead the singing of ecclesiastical music.

38. Something that fits in a lock : OAR
Oarlocks are swivelling braces on the sides of a rowing boat that hold the oars as the boat is being propelled. Back in Ireland, we call them “rowlocks” (pronounced “rollox”).

43. Cocktail usually served with an orange slice and a cherry : TEQUILA SUNRISE
The cocktail known as a Tequila Sunrise comprises tequila, orange juice and grenadine. The tequila and orange juice are mixed with ice in a tall glass, and then the grenadine is added. The grenadine sinks, so that the drink is quite red at the bottom of the glass and gradually turning orange towards the top, resembling a sunrise.

46. Sloping water trough : SLUICE
A “sluice” is a water channel with a gate at its head that is used to control the amount of water flowing.

47. Drudge : PEON
A peon is a lowly worker with no real control over his/her working conditions. The word comes into English from Spanish, in which language it has the same meaning.

48. Start of Caesar’s boast : I CAME …
The oft-quoted statement “Veni, vidi, vici” (“I came, I saw, I conquered”) is believed by many to have been written by Julius Caesar. The words date back to 47 BC and refer to the short war between Rome and Pharnaces II of Pontus.

54. Surface-dwelling race in “The Time Machine” : ELOI
In the 1895 novel by H. G. Wells called “The Time Machine”, there are two races that the hero encounter in his travels into the future. The Eloi are the “beautiful people” who live on the planet’s surface. The Morlocks are a race of cannibals living underground who use the Eloi as food.

64. A, in Andalusia : UNA
Andalusia (“Andalucia” in Spanish) is one of the seventeen autonomous communities in the Kingdom of Spain, and is the most southerly. The capital of Andalusia is the old city of Seville. The name Andalusia comes from its Arabic name, Al-Andalus, reflecting the region’s history as the center of Muslim power in Iberia during medieval times.

Down
4. Pilgrimage destinations : MECCAS
We’ve been using “mecca” to mean “a place one holds sacred” since the 1850s, and have since extended the usage to include any center of activity. The term derives from the sacred city of Islam, the birthplace of Muhammad.

5. Pamphlets, postcards and such : EPHEMERA
“Ephemera” was originally a medical term, used to describe a fever that only lasted a day. The use of the term was expanded in the 17th century to include insects that were “short-lived”, and by end of the 18th century “ephemera” were any things of transitory existence.

6. Mark Twain, notably : WIT
Samuel Langhorne Clemens was the real name of the author Mark Twain. Twain wasn’t the only pen name used by Clemens. Early in his career he signed some sketches as “Josh”, and signed some humorous letters that he wrote under the name “Thomas Jefferson Snodgrass”. The name of Mark Twain came from the days when Clemens was working on riverboats on the Mississippi. A riverboatman would call out “by the mark twain” when measuring the depth of water. This meant that on the sounding line, according to the “mark” on the line, the depth was two (“twain”) fathoms, and so it was safe for the riverboat to proceed.

8. Johnny of “Sleepy Hollow” : DEPP
Johnny Depp got his big break as an actor on television, in the eighties television show “21 Jump Street”. Depp’s first film success came when he played the title role in 1990’s “Edward Scissorhands”. He has twice been named Sexiest Man Alive by “People” magazine.

“Sleepy Hollow” is a Tim Burton film released in 1999. It is a screen adaptation of the short story “The Legend of Sleepy Hollow” by Washington Irving. Stars of the film are Johnny Depp and Christina Ricci.

27. Hägar the Horrible’s dog : SNERT
“Hägar the Horrible” is a comic strip that was created by the late Dik Browne and is now drawn by his son, Chris Browne. “Hägar the Terrible” (not “Horrible”) was the nickname given to Dik by his sons. The strip’s title character is a red-bearded Viking living on the Norwegian coast during the Middle Ages. Hägar lives with his overbearing wife Helga, his sensitive son Hamlet, his pretty daughter Honi, and his clever dog Snert.

28. Jewish organization on campus : HILLEL
Hillel: The Foundation for Jewish Campus Life is a Jewish campus organization that operates throughout the world. Hillel was founded at the University of Illinois, Urbana-Champaign in 1923. The organization is named for a first-century Jewish sage called Hillel the Elder.

29. Sycophantic : OBSEQUIOUS
A sycophant is a selfish person, one who flatters. The term comes from the Greek “sykophantes” which originally meant “one who shows the fig”. This phrase described a vulgar gesture made with the thumb and two fingers.

36. Muchacho’s sweetie : CHICA
In Spanish, a “niña” is a young girl, a child. The term “chica” applies to an older girl or perhaps a young woman.. The term “muchacha” applies to girls in general, I think …

37. Back out of : RENEGE ON
To renege on something is to back out of it. It’s a word commonly used in card games like bridge and whist. A renege is when a player doesn’t follow suit, even though there may be a card of the suit led in his/her hand.

42. Two-toned horse : PINTO
A “pinto” is a horse with patchy markings of white mixed with another color. “Pinto” means “painted” in American Spanish.

45. Mr. ___, host of “Fantasy Island” : ROARKE
“Fantasy Island” was a fun television series that aired from 1978 to 1984, starring the dashing Ricardo Montalban as Mr. Roarke and Herve Villechaize as Tattoo. Tattoo is Roarke’s colorful sidekick, famous for shouting out, “The plane! The plane!” as the guests arrived on the island at the beginning of each episode. There were lots of celebrity guest stars that appeared over the years, such as Sonny Bono, Tom Jones, Victoria Principal and Heather Locklear.

49. 1961 space chimp : ENOS
Enos was a chimpanzee that was launched into Earth orbit in 1961 by NASA on a Mercury Atlas 4 rocket. Enos’s flight was a rehearsal for the first orbital flight made by an American, astronaut John Glenn. Enos returned from his mission safely, but died the following year from dysentery.

51. Color of unbleached silk : ECRU
The shade called ecru is a grayish, yellowish brown. The word “ecru” comes from French and means “raw, unbleached”. “Ecru” has the same roots as our word “crude”.

53. Enforcer of the Fed. Meat Inspection Act : USDA
The US Department of Agriculture (USDA) classifies meat into eight different grades:

55. Reed of the Velvet Underground : LOU
Lou Reed was best known as a rock musician and songwriter, and was especially associated with the fabulous 1973 hit “Walk on the Wildside”. Reed is less well known as a photographer, but he published two collections of his work. The first was released in 2003 under the title “Emotions in Action”, and the second in 2006 called “Lou Reed’s New York”. Reed passed away in 2013.

The Velvet Underground was an influential New York City rock band active in the late sixties and early seventies. The group was formed by Lou Reed and John Cale, and was managed by pop artist Andy Warhol.