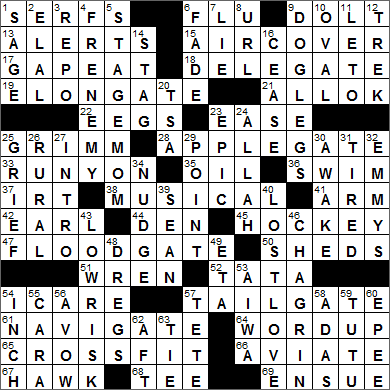 CROSSWORD SETTER: Finn Vigeland
THEME: Gate Scandal … today’s themed answers are words with a -GATE prefix added, as if there was a scandal involved. The resulting answer can also be interpreted as a common word with a very different meaning:

Today’s Wiki-est, Amazonian Googlies
Across
1. Medieval drudges : SERFS
A serf was a member of the lowest feudal class, someone attached to land owned by a lord. “Serf” comes from the Latin “servus”, meaning “slave”.

6. Word before shot or season : FLU
Influenza (flu) is an ailment that is caused by a virus. The virus is readily inactivated by the use of soap, so washing hands and surfaces is especially helpful in containing flu outbreaks.

9. Imbecile : DOLT
The rather unsavory term “imbecile” was formerly used by the medical community to describe someone with moderate to severe mental retardation. The term comes from the Latin “imbecillus” meaning “weak, feeble”, which was extended to mean “weak-minded”. Back in the early 1900s, IQ tests were used to classify those suffering from mental retardation into categories:

18. Scandal surrounding copy editors’ proofreading marks? : DELEGATE (dele + gate)
“Dele” is the editorial instruction to delete something from a document, and is often written in red.

22. Some hosp. tests : EEGS
An electroencephalogram (EEG) is a record of electrical activity caused by the firing of neurons within the brain. The EEG might be used to diagnose epilepsy, or perhaps to determine if a patient is “brain dead”.

25. Storyteller Wilhelm or Jakob : GRIMM
The Brothers Grimm (Jacob and Wilhelm) were two German academics noted for collecting and publishing folk tales. Among the tales in their marvelous collection are “Snow White and the Seven Dwarfs”, “Sleeping Beauty” and “Cinderella”.

28. Scandal affecting iPhone owners? : APPLEGATE (Apple + gate)
Apple started development of the iPhone in 2004 in collaboration with Cingular Wireless (now AT&T Mobility). The confidential program was given the name “Project Purple”, and took thirty months to complete at a cost of about $150 million. The iPhone was introduced in 2007 at the Macworld convention in San Francisco.

The actress Christina Applegate started her career as a child actress in the sitcom “Married… with Children”. More recently, Applegate co-starred in the show “Up All Night”.

33. ___ Canyon Park (running spot in the Hollywood Hills) : RUNYON
Runyon Canyon Park in Los Angeles is located at the eastern end of the Santa Monica Mountains. The 160-acre park is noted for it hiking, views and a liberal leash-law for dogs.

37. N.Y.C. subway inits. : IRT
The Interborough Rapid Transit Company (IRT) was the original private operator of the New York Subway when it opened in 1904. The city took over ownership of the system in 1940, but the lines originally operated by the IRT are still known by the IRT moniker.

38. “Hamilton,” e.g. : MUSICAL
“Hamilton” is a 2015 musical based on the life or US Founding Father Alexander Hamilton, as described in the 2004 biography by Ron Chernow. The representations of the main characters is quite ground-breaking. The show is rooted in hip-hop and the main roles such as Hamilton, Thomas Jefferson and George Washington are all played by African-American and Hispanic actors.

42. Title on “Downton Abbey” : EARL
In the incredibly successful period drama “Downton Abbey”, the patriarch of the family living at Downton is Robert Crawley, the Earl of Grantham or Lord Grantham. The character is played by Hugh Bonneville. Lord Grantham married American Cora Levinson (played by Elizabeth McGovern. Lord and Lady Grantham had three daughters, and no son. The lack of a male heir implied that the Grantham estate would pass to a male cousin, and out of the immediate family. The Grantham daughters are Lady Mary (played by Michelle Dockery), Lady Edith (played by Laura Carmichael) and Lady Sybil (played by Jessica Brown Findlay). Lady Sybil had the audacity to marry the family chauffeur, an Irish nationalist. The shame of it all …

47. Scandal in the aftermath of a tsunami? : FLOODGATE (flood + gate)
“Tsunami” is a Japanese word meaning “harbor wave”.

Floodgates are gates that can be opened and closed to control the amount of water flowing into and out of a river, reservoir or other waterway.

51. Small, brown songbird : WREN
A wren is a small songbird belonging to the family troglodytidae and the genus troglodytes.

61. Scandal depicted in “Avatar”? : NAVIGATE (Na’vi + gate)
In the James Cameron epic “Avatar”, the “blue people” are the Na’vi, the indigenous species that lives on the lush moon called Pandora. The main Na’vi character featuring in the film is the female Neytiri. According to Cameron, Neytiri was inspired by the Raquel Welch character in the movie “Fantastic Voyage” and the comic book character Vampirella.

Down
2. Its inaugural flight was in 1948 : EL AL
El Al Israel Airlines is the flag carrier of Israel. The term “el al” translates from Hebrew as “to the skies”. The company started operations in 1948, with a flight from Geneva to Tel Aviv.

3. Pickup that gets picked up, perhaps : REPO
Repossession (repo)

4. Ally who’s not completely an ally : FRENEMY
A frenemy is someone who feigns friendship but who is actually an enemy or competitor.

10. Shape of the president’s office : OVAL
Although there have been several “oval offices” used by US presidents in the White House, the current Oval Office was designed and constructed at the bequest of President Franklin D. Roosevelt. The room has four doors: one door opens onto the Rose Garden; a second door leads to a small study and dining room; a third opens onto the main corridor running through the West Wing; the fourth door opens to the office of the president’s secretary.

11. Jared of “Dallas Buyers Club” : LETO
Jared Leto is an actor and musician. In the world of music, Leto is the lead singer and rhythm guitarist for the rock band 30 Seconds to Mars. In the film world his most critically acclaimed role was that of a heroin addict in “Requiem for a Dream”. He also appeared in “American Psycho”, “Panic Room” and “Lord of War”.

“Dallas Buyers Club” is a 2013 film that tells the real-life story of AIDS patient Ron Woodruff. Woodruff smuggled unapproved AIDS drugs across the US border into Texas in opposition to the Food and Drug Administration (FDA). The movie won the Best Actor Oscar for Matthew McConaughey and Best Supporting Actor for Jared Leto.

20. Decidedly not-lax grp. at LAX : TSA
The Transportation Security Administration (TSA) was created in 2001, soon after the 9/11 attacks. TSA personnel carry out the baggage and body searches at US airports. The TSA has a Trusted Traveler program that allows certain passengers to move more quickly through security screening. These passengers pay the TSA a one-time fee that covers a background check after which successful applicants are issued a Known Traveler Number (KTN).

23. Filmdom’s “The Bible,” e.g. : EPIC
“The Bible: In the Beginning…” is a 1966 religious epic directed by John Huston with an impressive cast. That cast includes Richard Harris, George C. Scott, Ava Gardner and Peter O’Toole. Charlie Chaplin was offered the role of Noah but declined, and so Huston played Noah himself. The storyline covers the Creation through to the story of Abraham. The film was produced by Dino De Laurentiis and was shot in Italy.

Over 50% of the world’s population consider themselves to be adherents of the big three Abrahamic religions: Christianity (2-2.2 billion), Islam (1.6-1.7 billion) and Judaism (14-18 million).

32. TV’s “Oscars” : EMMYS
The Emmy Awards are the television equivalent of the Oscars in the world of film, the Grammy Awards in music and the Tony Awards for the stage. Emmy Awards are presented throughout the year, depending on the sector of television being honored. The most famous of these ceremonies are the Primetime Emmy Awards and the Daytime Emmy Awards. The distinctive name of “Emmy” is a softened version of the word “immy”, the nickname given to the video camera tubes found in old television cameras.

39. Actor Bean, whose first name looks like it rhymes with his last, but doesn’t : SEAN
Sean Bean is an English actor who is perhaps best known in North America for playing Boromir in the “Lord of the Rings” trilogy. James Bond fans will remember him as the bad guy in “GoldenEye”, the character called Alec Trevelyan.

40. Frequent theme for Adele : LOST LOVE
Adele is the stage name of English singer Adele Adkins. Adele’s debut album is “19”, named after the age she was during the album’s production. Her second album was even more successful than the first. Called “21”, the second album was released three years after the first, when Adele was three years older. More recently, her third studio album “25”, released in 2015, broke the first-week sales records in both the UK and the US.

49. Hellenic “H” : ETA
Eta is the seventh letter of the Greek alphabet, and is a forerunner of our Latin character “H”. Originally denoting a consonant, eta was used as a long vowel in Ancient Greek.

59. Ballerina’s wear : TUTU
The word “tutu”, used for a ballet dancer’s skirt, is actually a somewhat “naughty” term. It came into English from French in the early 20th century. The French “tutu” is an alteration of the word “cucu”, a childish word meaning “bottom,” or “backside”.

60. Olympics sword : EPEE
There are three fencing events in the modern Olympics, distinguished by the weapon used: