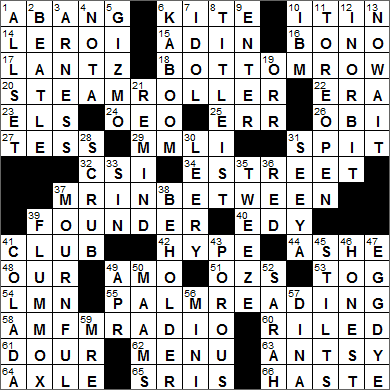 CROSSWORD SETTER: Betty Keller
THEME: Mr In-Between … today’s themed answers are two-word phrases, the first end with the letter M, and the second starting with the letter R. As a result, we have the letters “MR” IN-BETWEEN the words in the answers:

18A. 64-, 65- and 66-Across, in this puzzle : BOTTOM ROW
20A. Heavy vehicle that smooths a road surface : STEAMROLLER
55A. Means of fortunetelling : PALM READING
58A. Audio feature that comes standard on cars : AM/FM RADIO

15. Score after deuce : AD IN
In tennis, if the score reaches “deuce” (i.e. when both players have scored three points), then the first player to win two points in a row wins the game. The player who wins the point immediately after deuce is said to have the “advantage”. If the player with the advantage wins the next point then that’s two in a row and that player wins the game. If the person with the advantage loses the next point, then advantage is lost and the players return to deuce and try again. If the one of the players is calling out the score then if he/she has the advantage then that player announces “ad in” or more formally “advantage in”. If the score announcer’s opponent has the advantage, then the announcement is “ad out” or “advantage out”. Follow all of that …?

16. U2 lead singer : BONO
Irish singer Bono is a Dubliner, born Paul David Hewson. As a youth, Hewson was given the nickname “Bono Vox” by a friend, a Latin expression meaning “good voice”, and so the singer has been known as Bono since the late seventies. His band’s first name was “Feedback”, later changed to “The Hype”. The band members searched for yet another name and chose U2 from a list of six names suggested by a friend. They picked U2 because it was the name they disliked least …

24. Antipoverty agcy. : OEO
The Office of Economic Opportunity (OEO) was created during the Lyndon Johnson administration. The agency was responsible for administering the War on Poverty programs that were part of the President Johnson’s Great Society agenda. The OEO was shut down by President Nixon, although some of the office’s programs were transferred to other agencies. A few of the OEO’s programs are still around today, like Head Start for example.

26. Samurai sash : OBI
The sash worn as part of traditional Japanese dress is known as an obi. The obi can be tied in what is called a butterfly knot.

In the Edo period of Japan, the “samurai” were the military nobility, the warrior class who served in close attendance to the nobility.

The “Dick Tracy” comic strip was created way back in 1931 by Chester Gould. Dick Tracy was always up to date with the latest crime fighting techniques and gadgets, and even had a few that weren’t in use in real life. Tracy’s most famous gadget was his two-way wrist radio, something he started using in 1946. The radio got an upgrade in 1964 when it became a two-way wrist TV!

32. TV series with “NY,” “Miami” and “Cyber” spinoffs : CSI
The “CSI” franchise of TV shows has been tremendously successful, but seems to be winding down. “CSI: Miami” (the “worst” of the franchise, I think) was cancelled in 2012 after ten seasons. “CSI: NY” (the “best” of the franchise) was cancelled in 2013 after nine seasons. The original “CSI: Crime Scene Investigation”, set in Las Vegas, hung in there until 2015 when it ended with a two-hour TV movie. The youngest show in the series is “CSI: Cyber”, and it’s still on the air.

34. Thoroughfare in the name of Springsteen’s band : E STREET
The E Street Band is the backing group for Bruce Springsteen. The band came together in 1972 but didn’t take a formal name until two years later. The keyboard player in the original line up was David Sancious, and his mother allowed the group to rehearse at her home. That home was on E Street in Belmar, New Jersey, and that’s where the band got their name.

37. “Don’t mess with” him, per an old song lyric … or a hint to 18-, 20-, 55- and 58-Across : MR IN-BETWEEN
“Ac-Cent-Tchu-Ate the Positive” is a 1944 song by Harold Arlen and Johnny Mercer, and recorded by Mercer that same year. Other releases of the song were recorded later, including hit versions by Bing Crosby and the Andrews Sisters, and by Artie Shaw. The first verse is:
You’ve got to accentuate the positive
Eliminate the negative
Latch on to the affirmative
Don’t mess with Mister In-Between

40. Big name in ice cream : EDY
Dreyers’ ice cream sells its products under the name Dreyers in the Western United States, and Edy’s in the Eastern states. The company’s founders were William Dreyer and Joseph Edy.

42. Promotional hoopla : HYPE
The word “hoopla” means “boisterous excitement”. The term probably comes from “houp-là”, something the French say instead of “upsy-daisy”. Then again, “upsy-daisy” probably isn’t something said very often here in the US …

44. Court legend Arthur : ASHE
Arthur Ashe was a professional tennis player from Richmond, Virginia. In his youth, Ashe found himself having to travel great distances to play against Caucasian opponents due to the segregation that still existed in his home state. He was rewarded for his dedication by being selected for the 1963 US Davis Cup team, the first African American player to be so honored. Ashe continued to run into trouble because of his ethnicity though, and in 1968 was denied entry into South Africa to play in the South African Open. In 1979 Ashe suffered a heart attack and had bypass surgery, with follow-up surgery four years later during which he contracted HIV from blood transfusions. Ashe passed away in 1993 due to complications from AIDS. Shortly afterwards, Ashe was posthumously awarded the Presidential Medal of Freedom by President Bill Clinton.

48. Thornton Wilder’s “___ Town” : OUR
“Our Town” is a play by Thornton Wilder, first performed in 1938. Wilder won a Pulitzer for the work. “Our Town” was actually banned by the Soviet authorities in East Berlin in 1946. Their reasoning was that “the drama was too depressing and could inspire a German suicide wave”.

53. Dress (up) : TOG
The verb “tog”, meaning to dress up, comes from the Latin “toga”, the garment worn in Ancient Rome. “Tog” can be use as an informal word for a coat or a cloak. Back in Ireland, togs are what we call swimming shorts.

63. Overly anxious : ANTSY
The word “antsy” embodies the concept of “having ants in one’s pants”, meaning being nervous and fidgety. However, “antsy” has been used in English since the 1830s, whereas “ants in the pants” originated a century later.

Down
2. John, Paul, George or Ringo : BEATLE
The Beatles went through quite an evolution of names and band members. The evolution of band names is the Blackjacks, the Quarrymen, Johnny & the Moondogs, Beatals, the Silver Beetles, the Silver Beatles and finally the Beatles.

3. James of “Gunsmoke” : ARNESS
James Arness played the role of Matt Dillon, Marshal of Dodge City, on “Gunsmoke” for twenty years. If you count the occasions when he reprised the role for specials, he actually performed as Matt Dillon over five decades. And, did you know that Peter Graves, the actor who played Jim Phelps on “Mission: Impossible”, his real name was Peter Arness? He and James were brothers.

5. Thingamabob : GIZMO
The word “gizmo” (also “gismo”) was originally slang used by both the US Navy and the Marine Corps, but the exact origin seems unknown. Nowadays, “gizmo” is a general term used for a device or a part when the correct name escapes one (so I use it a lot …). Oh, and Gizmo is the name of the dog belonging to my son and his fiancee.

7. TV’s discontinued “American ___” : IDOL
Fox’s “American Idol” is a spin-off show that was created after the amazing success of the British television show “Pop Idol”. I can’t abide either program(me) …

8. Big name in golf balls : TITLEIST
The golf equipment brand name “Titleist” is most closely associated with golf balls. The name of the brand comes from the word “titlist” meaning “the one who holds the title”.

10. “Let’s Build a Smarter Planet” co. : IBM
IBM was founded as the Tabulating Machine Company in 1896. The company changed its name to the Computing Tabulating Recording Corporation (CTR) in 1911 and was listed on the New York Stock Exchange in 1916. The name of International Business Machines (IBM) was given first to the company’s Canadian subsidiary, and then its South American subsidiary. In 1924, it was decided to adopt the International Business Machines name for the whole company. Good choice …

19. Former Bruin Bobby : ORR
Bobby Orr is regarded as one of the greatest hockey players of all time. By the time he retired in 1978 he had undergone over a dozen knee surgeries. At 31 years of age, he concluded that he just couldn’t skate anymore. Reportedly, he was even having trouble walking …

35. Pluck, as an eyebrow : TWEEZE
Tweezers are small metal pincers used in handling small objects. Back in the 1600s, “tweeze” was the name given to the case in which such an implement was kept, and over time the case gave its name to the device itself. “Tweeze” evolved from “etweese”, the plural of “etwee”, which came from “étui “, the French word for a “small case”.

41. Piña ___ (fruity drink) : COLADA
“Piña colada” is a Spanish term which translates into “strained pineapple”. The Piña colada cocktail was introduced in the Caribe Hilton San Juan in 1954, and since 1978 it has been the official beverage of Puerto Rico. Yum …

49. Mo. before May : APR
The exact etymology of “April”, the fourth month of our year, seems to be uncertain. The ancient Romans called it “mensis Aprilis”, which roughly translated as “opening month. The suggestion is that April is the month in which fruits, flowers and animals “open” their life cycles.

57. Actress Merrill : DINA
Dina Merrill was in 22 movies, including two of my favorites: “Desk Set” with Tracy & Hepburn, and “Operation Petticoat” with Cary Grant. Nowadays, Merrill carries some sway in the business world. Until 2007 she was on the compensation committee of Lehman Brothers, the merry band that approved all those big bonuses. Ms. Merrill probably doesn’t talk too much these days about that aspect of her life!

59. Field fare for a G.I. : MRE
The Meal, Ready-to-Eat (MRE) comes in a lightweight package that’s easy to tote around. The MRE replaced the more cumbersome Meal, Combat, Individual (MCI) in 1981, a meal-in-a-can. In turn, the MCI had replaced the C-ration in 1958, a less sophisticated meal-in-a-can with a more limited choice.