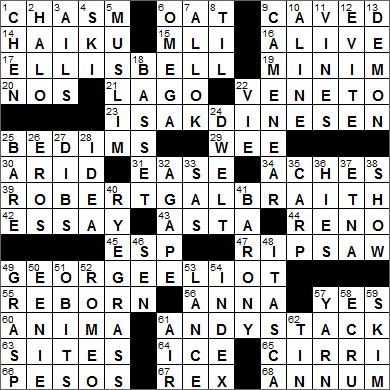 6. Muesli morsel : OAT
“Muesli” is a Swiss-German term describing a breakfast serving of oats, nuts, fruit and milk. “Muesli” is a diminutive of the German word “Mues” meaning “puree”. Delicious …

14. Three-line work : HAIKU
A haiku is a very elegant form of Japanese verse. When writing a haiku in English we tend to impose the rule that the verse must contain 17 syllables. This restriction comes from the rule in Japanese that the verse must contain 17 sound units called “moras”, but moras and syllables aren’t the same thing. What the difference is though, is not so clear to me. Here’s a rather humorous example of a Haiku:

22. Rome’s Via ___ : VENETO
Via Veneto is (actually “Via Vittorio Veneto”) is an upmarket street in Rome, the site of many of the pricier hotels. It was made famous in Federico Fellini’s “La Dolce Vita”, and is still the home to Harry’s Bar and Café de Paris, both featured in the movie.

34. Has a yen (for) : ACHES
The word “yen”, meaning “urge”, has been around in English since the very early 1900s. It comes from the earlier word “yin” imported from Chinese, which was used in English to describe an intense craving for opium!

39. Pen name of the female author of “The Cuckoo’s Calling” : ROBERT GALBRAITH
Joanne Rowling changed her name to J. K. Rowling at the request of her publisher, who believed that young boys might have shied away from reading the first “Harry Potter” book if they believed the story was written by a woman (this was 1997!). “Jo” Rowling chose J for Joanne, and K for Kathleen after her grandmother (Jo has no middle name to use). Rowling also writes books for adults, using the pen name Robert Galbraith.

“The Cuckoo’s Calling” is the first in a series of crime novels written by J. K. Rowling using the pen name Robert Galbraith. The author’s name was kept secret on initial release, and sales were unremarkable. After Galbraith was “unmasked”, sales surged and within weeks “The Cuckoo’s Calling” was the top seller on Amazon.com. I haven’t yet read the book, but the critics have been generally enthusiastic.

43. Terrier of old whodunits : ASTA
Asta is the wonderful little dog in the superb “The Thin Man” series of films starring William Powell and Myrna Loy (as Nick and Nora Charles). In the original story by Dashiell Hammett, Asta was a female Schnauzer, but on screen Asta was played by a wire-haired fox terrier called “Skippy”. Skippy was also the dog in “Bringing up Baby” with Cary Grant and Katharine Hepburn, the one who kept stealing the dinosaur bone. Skippy retired in 1939, so Asta was played by other dogs in the remainder of “The Thin Man” films.

44. Attorney general parodied by Ferrell : RENO
Janet Reno was Attorney General of the US from 1993 to 2001. Reno was the person to hold the office second longest, and was our first female Attorney General. In 2002, Reno ran for Governor of Florida but failed to win the Democratic nomination. Thereafter she retired from public life.

47. Coarse-toothed tool : RIPSAW
In woodworking, a cut across the grain is known as a cross cut. A cut along the grain is called a rip cut. Most saws are designed to perform the best cross cuts, but there is a special ripsaw that more easily cuts straight lines along the grain.

49. Pen name of the female author of “Silas Marner” : GEORGE ELIOT
George Eliot was the pen name of English novelist Mary Anne Evans. As one might think, Evans chose a male pen name in order that her work might be best appreciated in the Victorian era. Eliot wrote seven novels including “Adam Bede” (1859), “The Mill on the Floss” (1860), “Silas Marner” (1861) and “Middlemarch” (1871-72).

56. Fashion editor Wintour : ANNA
Anna Wintour is fashion editor in Britain, and is also the editor-in-chief of American “Vogue”. Lauren Weisberger wrote the book “The Devil Wears Prada” with the tyrannical main character apparently based on Wintour.

61. Pen name of the female author of True Detective stories : ANDY STACK
Ann Rule is a true-crime writer, who comes from a crime-fighting family with sheriffs, a medical examiner and a prosecutor around her as she grew up. She started off writing with a male pen name (Andy Stack) as it was perceived that she would have more success in the genre, after a virtual “sex change”.

66. Cash in Baja : PESOS
The coin called a “peso” is used in many Spanish-speaking countries around the world. The coin originated in Spain where the word “peso” means “weight”. The original peso was what we know in English as a “piece of eight”, a silver coin of a specific weight that had a nominal value of eight “reales”.

68. 15-Across, e.g. : ANNUM
(15A. Mid-11th century year : MLI)
The Latin word for year is “annus”. We often see it used in Latin phrases, but usually with a different spelling. For example in “anno Domini”, the “anno” is the ablative case of “annus” as the phrase means “in the year of the Lord”. Another example is “per annum”, in which “annum” is the accusative case as the literal translation of the phrase is “during the year”.

Down
1. “Big Brother” host Julie : CHEN
As well as co-anchoring “The Early Show”, Julie Chen has been host of the American version of “Big Brother” since it graced our screens in the year 2000.

The “Big Brother” television franchise started out in 1999 in the Netherlands. The term “Big Brother” comes from George Orwell’s novel “Nineteen Eighty-Four”.

2. Prop at a Christmas play : HALO
The Greek word “halos” is the name given to the ring of light around the sun or moon, which gives us our word “halo”, used for a radiant light depicted above the head of a saintly person.

6. Last in a series : OMEGA
Omega is the last letter of the Greek alphabet, and is the one that looks like a horseshoe. The word “omega” literally means “great O” (O-mega). Compare this with the Greek letter Omicron meaning “little O” (O-micron).

10. Dior dress style : A-LINE
Christian Dior was a French fashion designer. As WWII approached, Dior was called up by the French military, drawing a temporary halt to his career in fashion. He left the army in 1942 and for the duration of the war designed clothes for wives of Nazi officers and French collaborators. After the war his designs became so popular that he helped reestablish Paris as the fashion center of the world.

18. Hound variety : BASSET
The Basset Hound wouldn’t be my favorite breed of dog, to be honest. Basset Hounds have a great sense of smell with an ability to track a scent that is second only to that of the Bloodhound. The name “Basset” comes from the French word for “rather low”, a reference to the dog’s short legs.

27. “Mine!,” in a schoolyard : DIBS
The phrase “to have dibs on” expresses a claim on something. Apparently, the term “dibs” is a contraction of “dibstone”, which was a knucklebone or jack used in a children’s game.

33. Carrier with a Copenhagen hub : SAS
SAS was formerly known as Scandinavian Airlines System and is the flag carrier of three countries: Denmark, Norway and Sweden. SAS is based at Stockholm Arlanda Airport located just north of the Swedish capital.

Copenhagen is the largest city and the capital of Denmark. I have never visited Copenhagen, but I hear it is a wonderful metropolis with a marvelous quality of life. The city is also very environmentally friendly, with over a third of its population commuting to work by bicycle.

35. Be a kvetch : CARP
The word “carp” used to mean simply “talk” back in the 13th century, with its roots in the Old Norwegian “karpa” meaning “to brag”. A century later the Latin word “carpere” meaning “to slander” influenced the use of “carp” so that it came to mean “find fault with”.

37. Volcano in Catania : ETNA
Mt. Etna is the largest of three active volcanoes in Italy. Mt Etna is about 2 1/2 times the height of its equally famous sister, Mt. Vesuvius. Etna is home to a 110-km long narrow-guage railway, and two ski resorts.

Catania is the second largest city on the island of Sicily (after Palermo). Catania has a long and rich cultural history, and today is best known as a center for technology industries earning it the nickname of the “European Silicon Valley”.

40. Wimbledon court surface : RYEGRASS
Wimbledon is a suburb of London located in the southwest of the metropolis. Wimbledon translates from Old English as “Wynnman’s Hill”, with “dun” being an archaic word for “hill”. And, the district is home to the All England Club where the Wimbledon tennis championships are played each year.

48. Lake that’s the source of the Mississippi : ITASCA
The Mississippi River runs right through the Midwest. It originates in Lake Itasca, Minnesota and flows into the Gulf of Mexico about a hundred miles below New Orleans. The name Mississippi is a corruption of a Native American name “misi-ziibi”, meaning “Great River”.

51. Articles that are sometimes prewritten : OBITS
“Obituary” comes from the Latin “obituaris”, originally the record of the death of a person, although the literal meaning is “pertaining to death”.

53. Tilter’s tool : LANCE
Tilting is the most recognized form of jousting. Jousting can involve the use of a number of different weapons, but when lances are used the competition is called “tilting”. Jousting took place in a roped-off enclosure that was called the lists, or list field. In later medieval times, some castles and palaces had purpose-built “tiltyards” that were used for jousting. Do you remember where the Beach Volleyball events were held in the 2012 London Olympics? Well that was Horse Guards Parade, the former tiltyard for the Palace of Whitehall that was used in the time of King Henry VIII.

58. Shade of raw linen : ECRU
The shade called ecru is a grayish, yellowish brown. The word “ecru” comes from French and means “raw, unbleached”. “Ecru” has the same roots as our word “crude”.

62. Pewter, mostly : TIN
Pewter is a relatively soft alloy that is made up mostly of tin, with some copper, antimony, bismuth and lead.