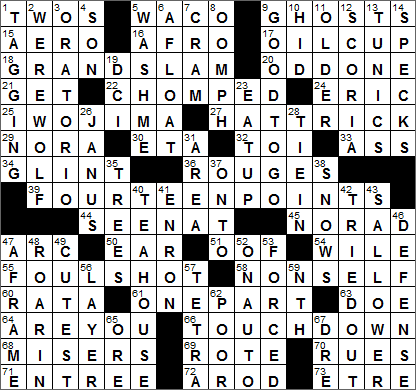 Today’s Wiki-est, Amazonian Googlies
Across
1. Uncommon bills : TWOS
The US two-dollar bill features a portrait of Thomas Jefferson. The bill was introduced in 1862, and withdrawn in 1966. It was reintroduced in 1976, and is still legal tender. That said, there are relatively few two-dollar bills in circulation. Some people even hold that possession of a two-dollar bill is bad luck.

5. Texas city where Dr Pepper was created : WACO
Dr Pepper was introduced in 1885 in Waco, Texas, one year before the competing Coca-Cola was released to the market. I spent an entertaining few hours at the Dr Pepper Museum in Waco a while back.

17. Receptacle in a machine : OILCUP
An oilcup or grease cup is a closed cup that supplies lubricant to bearings in a machine.

24. “Layla” musician Clapton : ERIC
“Layla” is one of the great rock anthems of the seventies, released by Derek and the Dominos in December of 1970. It is a masterpiece of composition, with the first half of the song a great vehicle for the guitar-playing talents of Eric Clapton. The second half is a beautifully melodic piano coda (a coda … taking up half the length of the track!). To top things off we have the “unplugged” version recorded by Clapton in 1992, a fabulous and inventive variation on the original.

25. Site of an iconic war photo : IWO JIMA
Iwo Jima is a volcanic island located south of Tokyo that today is uninhabited. The name is Japanese for “Sulfur Island”, referring to the sulfur mining on which Iwo Jima’s economy once depended. There were about a thousand Japanese civilians living on the island prior to WWII. In 1944, there was a massive influx of Japanese military personnel in anticipation of the inevitable US invasion. As the Japanese military moved in, the civilians were forced out and no one has lived there since.

The Pulitzer-winning photograph “Raising the Flag on Iwo Jima” was taken in 1945 by photographer Joe Rosenthal. The image was used for Marine Corps War Memorial in Washington, DC that was dedicated in 1954.

27. Hockey scoring play : HAT TRICK (3 points)
A hat trick in many sports is the scoring of three goals by the same player in a game of say, soccer or hockey.

29. Ephron who wrote “When Harry Met Sally” : NORA
Nora Ephron had many talents, including writing film scripts and novels. Many of the movies that she wrote, she also directed. These would include some of my favorite movies of all time like “Sleepless in Seattle”, “You’ve Got Mail” and most recently, the wonderful “Julie & Julia”. And, did you know that Nora Ephron’s second marriage was to journalist Carl Bernstein of Watergate fame? She wrote an autobiographical novel based on her life with Bernstein, dealing in particular with Bernstein’s affair with the daughter of British Prime Minister James Callaghan.

32. French pronoun : TOI
In French, the pronouns “toi” and “vous” both mean “you”, with the former being used with family and friends, and children. “Vous” is more formal, and is also the plural form of “toi”.

33. Onager, for one : ASS
The onager is also known as the Asiatic wild ass. The onager is a little larger than a donkey, and looks like a cross between a donkey and a horse. One characteristic of the onager is that it is remarkably “untamable”.

39. Proposal of Woodrow Wilson … or what the scoring values of 18-, 27-, 55- and 66-Across total : FOURTEEN POINTS
President Woodrow Wilson proposed fourteen principles to be used for peace negotiations towards the end of WWI. The president presented his fourteen points in a speech to the US Congress in January of 1918. The Treaty of Versailles that marked the end of the war did have significant differences with the US proposals, but President Wilson was awarded the 1919 Nobel Peace Prize for his peacemaking efforts.

45. Santa-tracking org. : NORAD
The North American Defense Command (NORAD) isn’t just a US operation but is a cooperative arrangement between Canada and the United States. The two countries entered into an agreement to establish NORAD in 1958, mainly due to the concern that there would be little or no warning of a missile attack from the Soviet Union that came over the North Pole. NORAD also tracks Santa Claus coming from the North Pole every Christmas, and these days publishes Santa’s location on Christmas Eve on its website. The tracking of Santa started into 1955 when a local Sears store placed an advertisement in a Colorado Springs newspaper with a phone number that could be used to call Santa Claus. The newspaper accidentally printed the number for the Continental Air Defense Command (a precursor to NORAD). The officer on duty instructed his staff to give all children who called a “current location” for Santa. Today, NORAD gets about 120,000 phone queries about Santa’s location every year, and website gets about 20 million visitors.

47. Multi-episode story line : ARC
A story arc is a continuing storyline in say a television show that has a number of episodes. Story arcs are also found in comics, books, video games, and other forms of media.

58. Material that is foreign to the body : NONSELF
In immunology, a “nonself” is any foreign material that enters the body and stimulates a response by the body’s immune system.

61. Cocktail recipe phrase : ONE PART
Our word “cocktail” first appeared in the early 1800s. The exact origin of the term is not clear, but it is thought to be a corruption of the French word “coquetier” meaning “egg cup”, a container that was used at that time for serving mixed drinks.

71. Main course : ENTREE
“Entrée” means “entry” in French. An entrée can be something that helps one get “a way in”, an interview for example perhaps helped along by a recommendation letter. In Europe, even in English-speaking countries, the entrée is the name for the “entry” to the meal, the first course. I found it very confusing to order meals when I first came to America!

72. Yankee nickname beginning in 2004 : A-ROD
Professional baseball player Alex Rodriguez earned more nicknames than just A-Rod. He has been called “the Cooler” by some players as there is a perception that teams go cold when he joins them and hot when he leaves. He has also been called “A-Fraud” by teammates because of another perception, that he is over-demanding. Rodriguez was in a world of hurt not so long ago, for using illegal performance-enhancing drugs.

Down
2. Lycanthrope : WEREWOLF
A “lycanthrope” is a werewolf, with the term coming from the Greek for wolf (lykos) and man (anthropos).

3. Handel’s “Messiah,” for one : ORATORIO
George Frideric Handel was the King of the Oratorio. Handel’s most famous oratorio is “Messiah”, which had its debut performance in Dublin, Ireland back in 1742.

11. Word at the bottom of a blog page : OLDER
Many folks who visit this website regard it as just that, a website. That is true, but more correctly it is referred to as a blog, as I make regular posts (actually daily posts) which then occupy the “front page” of the site. The blog entries are in reverse chronological order, and one can just look back day-by-day, reading older and older posts. “Blog” is a contraction of the term “web log”.

12. Dark volcanic rock : SCORIA
Scoria is a volcanic rock that we’re probably quite familiar with. It is a common choice for the “coals” in a gas barbecue grill.

26. Two-faced Roman god : JANUS
Janus was a Roman god usually depicted with two heads, one looking to the past and the other to the future. As such, as a god Janus is often associated with time. The Romans named the month of Ianuarius (our “January”) after Janus.

28. Many a Happy Meal toy : TIE-IN
The McDonald’s Happy Meal was introduced in 1977. The Happy Meal was inspired by a selection of food designed in a Guatemalan McDonald’s to suit children that was called “Menu Ronald”. The toys in Happy Meals often tie-in with some movie and so are part of an advertising campaign.

41. Name in a 2002 scandal : ENRON
After all the trials following the exposure of fraud at Enron, several of the key players ended up in jail. Andrew Fastow was the Chief Financial Officer. He plea-bargained and received ten years without parole, and became the key witness in the trials of others. Even Fastow’s wife was involved and she was sentenced to one year for helping her husband hide money. Jeffrey Skilling (ex-CEO) was sentenced to 24 years and 4 months. Kenneth Lay (CEO) died in 2006 after he had been found guilty but before he could be sentenced. The accounting firm Arthur Andersen was found guilty of obstruction of justice for shredding thousands of pertinent documents and deleting emails and files (a decision that the Supreme Court later overturned on a technicality). But still, Arthur Andersen collapsed under the weight of the scandal and 85,000 people lost their jobs (despite only a handful being directly involved with Enron).

47. Structure that’s roughly a triangular prism : A-FRAME
An A-frame house is one that has a steeply-angled roof, one forming the shape of the letter “A”. The A-frame design is popular in snowy regions, as the roof is so steeply pitched that it does not collect snow.

57. Aquarium fish : TETRA
The neon tetra is a freshwater fish, native to parts of South America. The tetra is a very popular aquarium fish and millions are imported into the US every year. Almost all of the imported tetras are farm-raised in Asia and very few come from their native continent.

65. Bauxite, for aluminum : ORE
Bauxite is an aluminum ore. It takes its name from the absolutely beautiful village of Les Baux in southern France, the home of the geologist who first recognized that the mineral was a useful source of the metal.

67. Beats by ___ (audio brand) : DRE
Beats by Dre is a brand of audio products made by Beats Electronics, a company that was co-founded by rapper Dr. Dre. Apple bought Beats for $3 billion in 2014, the largest acquisition by far in the company’s history.