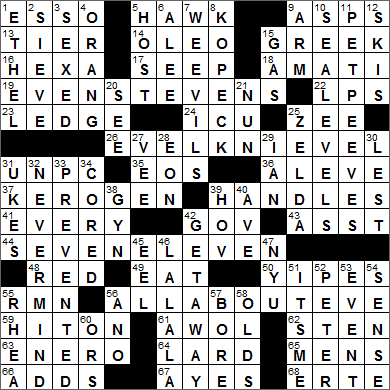 CROSSWORD SETTER: Freddie Cheng
THEME: All About Eve … each of today’s themed answers includes one or two occurrences of the word EVE hidden inside:

9. Egyptian vipers : ASPS
The asp is a venomous snake found in the Nile region of Africa. It is so venomous that the asp was used in ancient Egypt and Greece as a means of execution. Cleopatra observed such executions noting that the venom brought on sleepiness without any painful spasms. When the great queen opted to commit suicide, the asp was therefore her chosen method.

14. Bread spread : OLEO
Emperor Louis Napoleon III of France announced a competition to develop a substitute for butter, a substitute that would be more accessible to the lower classes and more practical for the armed forces. In 1869, a French chemist called Hippolyte Mege-Mouries came up with something that he called oleomargarine, which was eventually manufactured under the trade name “margarine”. The name “oleomargarine” also gives us our generic term “oleo”.

18. Fine Cremona violin : AMATI
The first of the Amati family to make violins was Andrea Amati, who lived in the 14th century. He was succeeded by his sons, Antonio and Girolamo. In turn, they were succeeded by Girolamo’s son, Nicolo. Nicolo had a few students who achieved fame making musical instruments as well. One was his own son, Girolamo, and another was the famed Antonio Stradivari.

Cremona is a city in Lombardy in northern Italy that lies on the Po River. Cremona has a rich musical history and was the home to famous craftsmen who made stringed instruments, including Stradivari and several members of the Amati family.

19. 2000-03 Disney Channel series with Shia LaBeouf : EVEN STEVENS
Shia LaBeouf is an actor who started out in the Disney television series “Even Stevens”. Adult audiences might be more familiar with his leading role in the 2003 film “Holes”.

25. Follower of wye : ZEE
In the (American) English alphabet, the letter Y (wye) is followed by the letter Z (zee).

26. Daredevil who survived more than 400 bone fractures : EVEL KNIEVEL
Daredevil Evel Knievel contracted hepatitis C from the many blood transfusions that he needed after injuries incurred during stunts. He had to have a liver transplant as a result, but his health declined after that. Knievel eventually passed away in 2007.

35. Dawn goddess : EOS
In Greek mythology, Eos is the goddess of the dawn who lived at the edge of the ocean. Eos would wake each morning to welcome her brother Helios the sun. The Roman equivalent of Eos is Aurora.

37. Oil-producing matter in shale : KEROGEN
The organic matter in oil shale that is insoluble in organic solvents is known as kerogen. Ultimately, kerogen turns into oil and natural gas.

42. Extension for the White House website : GOV
The .gov domain was one of the seven first generic top-level domains specified. The complete original list is:

48. Like most Twizzlers : RED
Twizzlers candy has been produced since 1845, although back then the only flavor available was licorice. My wife is addicted to strawberry Twizzlers. Can’t stand the stuff myself …

55. Watergate monogram : RMN
President Richard Milhous Nixon (RMN) used “Milhous” in his name in honor of his mother Hannah Milhous. Richard was born in a house in Yorba Linda, California. You can visit that house today as it is on the grounds of the Richard Nixon Presidential Library. It’s a really interesting way to spend a few hours if you ever get to Yorba Linda …

56. 1950 Bette Davis film hinting at something found 15 times in this puzzle : ALL ABOUT EVE
I must confess that I have a problem watching movies starring Bette Davis. I think I must have seen her play one of her more sinister roles when I was a kid and it gave me nightmares or something. So, I have never seen the 1950 classic “All About Eve”, given that Bette Davis gets top billing. But, the title role of Eve Harrington was played by Anne Baxter, and Ms Baxter’s movies I do enjoy. Coincidentally, on the epic television series “Hotel”, when Bette Davis became ill, it was Anne Baxter who was chosen to take on her role.

The official name of Uruguay is the Oriental Republic of Uruguay, reflecting the nation’s location on the eastern coast of South America. It is a relatively small country, the second-smallest on the continent, after Suriname. In 2009, Uruguay became the first country in the world to provide a free laptop and Internet access to every child. Now there’s a thought …

64. Some shortening : LARD
Fat, when extracted from the carcass of an animal, is called “suet”. Untreated suet decomposes at room temperature quite easily so it has to be “rendered” or purified to make it stable. Rendered fat from pigs is what we call “lard”. Rendered beef or mutton fat is known as “tallow”.

65. ___ Health magazine : MEN’S
“Men’s Health” is most popular men’s magazine sold in the US today. “Men’s Health” started out in 1987 focused on health, but has broadened and is now described as a lifestyle magazine.

68. Art Deco designer of the 1920s and ’30s : ERTE
Erté was the pseudonym of French artist (Russian born) Romain de Tirtoff. Erté is the French pronunciation of his initials “R.T.”

Down
1. Merman of song and stage : ETHEL
Ethel Merman was an actress and singer, one noted for having a very powerful voice. Merman was married and divorced four times, the last time to the actor Ernest Borgnine albeit for only 32 days in 1964.

2. Forty-niner’s tool : SIEVE
The California gold rush actually started in 1848, and not 1849. The first to exploit the find were those people already in California. By 1849 the word had spread and gold-seekers started to arrive from all over the world. The “out-of-towners” who arrived in 1849 became known as “forty-niners”.

4. Sumatran swinger, informally : ORANG
Orangutans (also “orangs”) are arboreal creatures, in fact the largest arboreal animals known to man. They are native to Indonesia and Malaysia, living in the rain forests. Like most species in rain forests these days, orangutans are endangered, with only two species surviving. The word “orangutan” is Malay, meaning “man of the forest”.

Sumatra is a very large island in western Indonesia, the sixth largest island in the world and home to 22% of the country’s population.

5. Chris Rock, for the 2016 Oscars : HOST
Chris Rock is a great stand-up comedian. Interestingly, Rock cites his paternal grandfather as an influence on his performing style. Grandfather Allen Rock was a preacher.

6. Sailor’s heading : ALEE
“Alee” is the direction away from the wind. If a sailor points into the wind, he or she is pointing “aweather”.

7. Plantation pests : WEEVILS
A weevil is a small beetle, known for the damage that it can do to crops. The boll weevil damages cotton plants by laying eggs inside cotton bolls. The young weevils then eat their way out. Some weevils have snouts that are as long as their body.

8. Fraction of a ruble : KOPECK
The ruble (also “rouble”) is the unit of currency in Russia, as well as several other countries of the former Soviet Union. One ruble is divided into one hundred kopecks.

10. Things that are rising globally, according to scientists : SEA LEVELS
Sea levels have been rising at the rate of about 1/10 of an inch per year for the past 100 years. The main cause of this rise in sea levels is the thermal expansion of the seawater due to increasing temperatures. About a quarter of the increase in sea levels is due to water runoff from land caused by the melting of snow and ice.

11. Personal annoyances : PET PEEVES
The phrase “pet peeve”, meaning “thing that provokes one most”, seems to be somewhat ironic. A “peeve” is a source of irritation, and the adjective “pet” means “especially cherished”.

12. Super G needs : SKIS
Super Giant Slalom (Super G) is an alpine skiing event introduced in 1982. The Super G isn’t as fast as its sister event the Downhill, but is faster than the more technical Giant Slalom.

21. Certain rosary counter : NUN
The Rosary is a set of prayer beads used in the Roman Catholic tradition. The name “Rosary” comes from the Latin “rosarium”, the word for a “rose garden” or a “garland of roses”. The term is used figuratively, in the sense of a “garden of prayers”.

29. Sir ___ McKellen (Gandalf portrayer) : IAN
Sir Ian McKellen is a marvelous English actor, someone who is comfortable playing anything from Macbeth on stage to Magneto in an “X-Men” movie. On the big screen, McKellen is very famous for playing Gandalf in “The Lord of Rings”. In the UK Sir Ian is noted for being at the forefront of the campaign for equal rights for gay people, a role he has enthusiastically embraced since the eighties.

31. Luau music makers, for short : UKES
The ukulele (“uke”) originated in the 1800s and mimicked a small guitar brought to the Hawaiian Islands by Portuguese immigrants.

39. Kind of lane for car-poolers : HOV
In some parts of the country one sees high-occupancy vehicle lanes (HOV lanes). Out here in California we call them carpool lanes.

40. “___ Maria” : AVE
“Ave Maria” (“Hail Mary” in English) is the prayer at the core of the Roman Catholic Rosary, which itself is a set of prayers asking for the assistance of the Virgin Mary. Much of the text of the “Hail Mary” comes from the Gospel of Luke. The words in Latin are:

45. Prey for a barracuda : EEL
The fish called a barracuda is large and dangerous-looking, with a fierce looking jaw filled with fang-like teeth. I was surrounded by a large school of barracuda once, many years ago while scuba diving. A scary experience …

47. Greenwich Village sch. : NYU
The main campus of the private New York University (NYU) is located right in Manhattan, in Washington Square in the heart of Greenwich Village. NYU has over 12,000 resident students, the largest number of residents in a private school in the whole country. NYU’s sports teams are known as the Violets, a reference to the violet and white colors that are worn in competition. Since the 1980s, the school’s mascot has been a bobcat. “Bobcat” had been the familiar name given to NYU’s Bobst Library computerized catalog.

52. Flying Pan : PETER
“Peter Pan” is a musical adaptation of J.M. Barrie’s 1904 play of the same name. The musical opened on Broadway in 1954, famously starring Mary Martin in the title role. NBC recorded three separate telecasts of the stage production with the original cast, in 1955, 1956 and 1960. NBC broadcast a revived version of the musical in 2014 called “Peter Pan Live!” with Allison Williams playing Peter, and Christopher Walken playing Captain Hook. Unlike the earlier recordings, the 2014 version was not well received.

58. Bygone G.M. car, appropriately enough : OLDS
Oldsmobile was an automobile brand founded by Ransom E. Olds (REO) in 1897. The brand was finally phased out by General Motors in 2004.