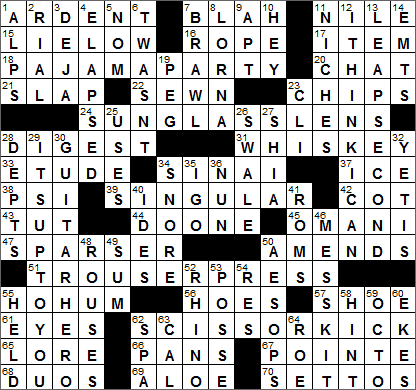 CROSSWORD SETTER: Tom McCoy
THEME: Singular Words … each of today’s themed answers uses a word that is always seen in the plural when used as a noun. That same word is used as an adjective in the grid, and is in the SINGULAR:

18A. Kids’ event that goes into the wee hours : PAJAMA PARTY (from “pajamas”)
24A. Something in a movie star’s frame? : SUNGLASS LENS (from “sunglasses”)
51A. Certain wrinkle remover : TROUSER PRESS (from “trousers”)
62A. Sidestroke component : SCISSOR KICK (from “scissors”)

Today’s Wiki-est, Amazonian Googlies
Across
11. River near the Valley of the Kings : NILE
The Valley of the Kings in the Egypt is located on the west bank of the Nile opposite the modern city of Luxor, the site of ancient Thebes. There are about 60 individual burial chambers in the area, which housed notable royals and nobles of Ancient Egypt.

16. Weapon in Clue : ROPE
Clue is another board game that we knew under a different name growing up in Ireland. Outside of North America, Clue is marketed as “Cluedo”. Cluedo was the original name of the game, introduced in 1949 by the famous British board game manufacturer Waddingtons. There are cute differences between the US and UK versions. For example, the man who is murdered is called Dr. Black (Mr. Boddy in the US), one of the suspects is the Reverend Green (Mr. Green in the US), and the suspect weapons include a dagger (a knife in the US), a lead pipe (lead piping in the US) and a spanner (a wrench in the US). I think it’s a fabulous game, a must during the holidays …

18. Kids’ event that goes into the wee hours : PAJAMA PARTY (from “pajamas”)
Our word “pajamas” comes to us from the Indian subcontinent, where “pai jamahs” were loose fitting pants tied at the waist and worn at night by locals and ultimately by the Europeans living there. And “pajamas” is another of those words that I had to learn to spell differently when I came to America. In the British Isles the spelling is “pyjamas”.

23. Lay’s product : CHIPS
Lay’s potato chips were introduced in 1938 by Herman W. Lay. Lay started selling his chips out the trunk of his car, travelling all over the US. In those days the chips were pretty much handmade, but Lay put an end to that in 1942. He invented the first continuous potato processor in 1948, and chips started to take over the world!

31. ___ sour (drink) : WHISKEY
A whiskey sour is made from whiskey, lemon juice and sugar, usually garnished with an orange slice and a maraschino cherry.

33. Pianist’s practice piece : ETUDE
An étude is a short instrumental composition that is usually quite hard to play and is intended to help the performer master a particular technique. “Étude” is the French word for “study”. Études are commonly performed on the piano.

34. Mount of the Bible : SINAI
According to the Bible, Mount Sinai is the mountain on which Moses was given the Ten Commandments. The Biblical Mount Sinai is probably not the mountain in Egypt that today has the same name, although this is the subject of much debate. The Egyptian Mount Sinai has two developed routes that one can take to reach the summit. The longer gentler climb takes about 2 1/2 hours, but there is also the steeper climb up the 3,750 “steps of penitence”.

43. One of the kings in the Valley of the Kings, informally : TUT
King Tut is a name commonly used for the Egyptian pharaoh Tutankhamen. Tutankhamen may not have been the most significant of the pharaohs historically, but he is the most famous today largely because of the discovery of his nearly intact tomb in 1922 by Howard Carter. Prior to this find, any Egyptian tombs uncovered by archaeologists had been ravaged by grave robbers. Tutankhamen’s magnificent burial mask is one of the most recognizable of all Egyptian artifacts.

50. What the remorseful might make : AMENDS
The verb “to amend” means “to change for the better, put right, alter by adding”. The related verb “to emend” is used more rarely and mainly in reference to the editing of professional writing. Both terms are derived from the Latin “emendare” meaning “to remove fault”.

51. Certain wrinkle remover : TROUSER PRESS (from “trousers”)
“Trousers” are pants, the garment covering the lower body and each leg separately. Ultimately, the word “trousers” evolved from the Erse word “triubhas” that described close-fitting shorts. Back in the 1600s there was a colorful saying:

55. Meh : HO-HUM
“Meh!” is one of those terms unfamiliar to me outside of crosswords. It is a modern colloquialism meaning “I’m not great, but not bad”. A friendly reader of this blog tells me that the usage of the term increased dramatically after it started to appear regularly in “The Simpsons” starting in the early nineties.

57. Clog or pump : SHOE
Clogs are shoes made from wood, at least in part. The clog originated as a protective item of footwear for use by farm, factory and mine workers.

67. Ballet position on tiptoe : POINTE
“En pointe” is a French term used to describe the ballet technique of dancing on the toes.

Down
1. Mont Blanc and Matterhorn : ALPS
Mont Blanc is the highest mountain in the Alps. The name “Mont Blanc” translates from French into “white mountain”. The mountain lies on the border between France and Italy, and it has been generally accepted for decades that the summit lies within French territory. However, there have been official claims that the summit does in fact fall within the borders of Italy.

2. Iranian currency : RIAL
“Rial” is name of the currency of Iran (as well as Yemen, Oman, Cambodia and Tunisia).

6. Quaint three-word contraction : ‘TWASN’T
‘Twasn’t (it was not)

7. Melee : BRAWL
Our word “melee” comes from the French “mêlée”, and in both languages the word means “confused fight”.

8. With 44-Across, 1869 romance by R. D. Blackmore : LORNA
(44A. See 8-Down : DOONE)
The novel “Lorna Doone: A Romance of Exmoor” was written by Richard Doddridge Blackmore. R. D. Blackmore was an English novelist, very celebrated and in demand in his day (the late 1800s). His romantic story “Lorna Doone” was by no means a personal favorite of his, and yet it is the only one of his works still in print.

13. Tiny adjustment to an atomic clock : LEAP SECOND
Coordinated Universal Time (UTC) is the primary time standard used to regulate clocks around the world. Because the Earth’s rotational speed is decreasing ever so slowly, UTC can vary slightly from solar time. As a result, leap seconds are added as required to UTC, on average about once every 19 months. Leap seconds are always added on June 30th or December 31st.

26. Marshy valley : SWALE
A swale is a narrow tract of low-lying land that is usually wet or marshy. A swale can be naturally occurring or man-made. One might create a swale to help manage drainage of adjacent land.

27. LaBeouf of “Transformers” : SHIA
Shia LaBeouf is an actor who started out in the Disney television series “Even Stevens”. Adult audiences might be more familiar with his leading role in the 2003 film “Holes”.

The 2007 blockbuster hit movie “Transformers” was inspired by a line of toys. Toy transformers can be morphed from their mundane looking appearance as a vehicle or perhaps an animal, into a robotic action figure. Not a movie I will be renting though …

30. Popular musical game beginning in 2005 : GUITAR HERO
Guitar Hero is an amazingly successful series of video games, first published in 2005. It is the third best selling franchise of video games, after Mario and Madden NFL. Sales have dropped in recent years though, and there are no plans for further releases.

32. Fabled mountain dwellers : YETIS
A yeti is a beast of legend, also called an abominable snowman. “Yeti” is a Tibetan term, and the beast is fabled to live in the Himalayan regions of Nepal and Tibet. Our equivalent legend in North America is that of Bigfoot, also known as Sasquatch. The study of animals whose existence have not yet been substantiated is called cryptozoology.

36. Wimple wearer : NUN
A wimple is a garment worn mainly in medieval Europe by women. The wimple covers the back of the head, neck and chin. It was tradition back then for genteel women to cover their hair. In modern times, habits worn by nuns include wimples.

41. CD-___ (storage objects) : ROMS
CD-ROM stands for “compact disc read only memory”. The name indicates that you can read information from the disc (like a standard music CD for example), but you cannot write to it. You can also buy a CD-RW, which stands for “compact disc – rewritable”, with which you can read data and also write over it multiple times using a suitable CD drive.

46. Collection that, despite its name, is orderly and compact : MESS KIT
“Mess” first came into English about 1300 and described the list of food needed for a meal, from the Old French word “mes” meaning a portion of food or a course at a meal. This usage in English evolved into “mess” meaning a jumbled mass of anything from the concept of “mixed food”. At the same time, the original usage in the sense of a food for a meal surfaced again in the military in the 1500s when a “mess” was a communal eating place.

50. “___ Fables” : AESOP’S
Aesop is remembered today for his famous fables. Aesop lived in Ancient Greece, probably around the sixth century BC. Supposedly he was born a slave, somehow became a free man, but then met with a sorry end. Aesop was sent to the city of Delphi on a diplomatic mission but instead insulted the Delphians. He was tried on a trumped-up charge of stealing from a temple, sentenced to death and was thrown off a cliff.

52. African animal you might get a charge out of? : RHINO
There are five types of rhinoceros that survive today, and the smaller Javan Rhino is the most rare. The rhinoceros is probably the rarest large mammal on the planet, thanks to poaching. Hunters mainly prize the horn of the rhino as it is used in powdered form in traditional Chinese medicine.

53. Gang : POSSE
Our word “posse” comes from an Anglo-Latin term from the early 15th century “posse comitatus” meaning “the force of the county”.

63. Silent ___ (presidential nickname) : CAL
President Calvin Coolidge, the only US President to have been born on July 4th, was known as a man of few words. It was while he was serving as Vice-President to in the administration of Warren G. Harding, that Coolidge earned the nickname “Silent Cal”. There is a famous story told about Coolidge’s reticence that I would love to think is true, attributed to the poet Dorothy Parker. Sitting beside him at dinner, she remarked to him, “Mr. Coolidge, I’ve made a bet against a fellow who said it was impossible to get more than two words out of you.” His famous reply: “You lose.”

64. Caviar, e.g. : ROE
“Caviar” is the roe of a large fish that has been salted and seasoned, and especially the roe of a sturgeon. Beluga caviar comes from the beluga sturgeon, found primarily in the Caspian Sea. It is the most expensive type of caviar in the world. 8 ounces of US-farmed beluga caviar can be purchased through Amazon.com for just over $850, in case you’re feeling peckish …